Jerry Lee Lewis: H-E-L-L . . . that’s right. It says “MAKE MERRY with the JOY OF GOD, only.” But when it comes to worldly music, rock and roll, anythin’ like that, 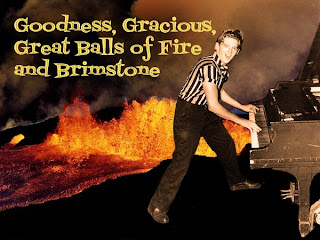 you’re in the world, and you haven’t come from out of the world, and you’re still a sinner. And you’re a sinner. You’re a sinner unless you be saved and born again, and be made as a little child, and walk before God, and be holy. And brother, I mean you got to be so pure, and no sin shall enter there. No SIN! Cause it says “no sin.” It don’t say just a little bit. It says “no sin shall enter there.” Brother, not one little bit. You got to walk and TALK with God to go to heaven. . . .

Phillips: Nah, gosh, it’s not what you believe it’s how do you interpret the Bible?

I’ll stop right there. It’s just so much more fun to hear this on youtube. A transcription can’t capture the accents and folk wisdom entailed, ya hear? I don’t even think Mark Twain could render the conversation justly. Hat tip to Joe Lucas (Historically Speaking) for making me aware of this fly-on-the-wall treasure. (How many other famous pop icons discussed hermeneutics with their producers?!?)

Hearing the above, I thought about work I’ve done, albeit very little, on rock, pop music and holiness-pentecostalism. At the suggestion of Bland Whitley while in grad school, I read an essay on famous pentecostal musicians (Stephen R. “Pentecostalism and Popular Culture in the South: A Study of Four Musicians,” Journal of Popular Culture 16 [Winter 1982]: 68-80.) Few have looked at pentecostal rock and rollers and country singers as Tucker did all those years ago. The evidence from interviews with performers, autobiographies, and secondary work is pretty stunning.

Elvis Presley, like “The Killer,” attended an Assemblies of God church. Johnny Cash spent some harrowing Sundays in a fired-up Church of God. Tammy Wynette did, too. 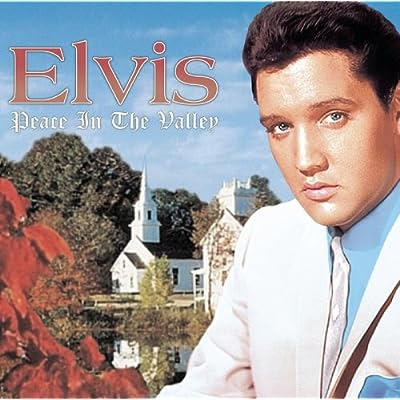 There are other links between black pentecostalism and B.B. King and Little Richard. The latter’s autobiography will blow your hair back. All that to say that the connection between sanctified religion, gospel quartets, shouting preachers, and rock is not a mere coincidence.

Here’s are a couple questions I’m interested in, and this speaks to the above audio clip: If, as the Louvin Brothers reminded the faithful in 1960, “Satan is real, working in spirit . . .” then how does one square the devil’s music with holy living? That dilemma worried Jerry Lee, and, to a lesser extent, Elvis. How much of the vibrancy and ecstasy of early rock was a result of a religious tension? Maybe much more than most realize.

I said a little bit about this in the last chapter of my book. It’s worth quoting David Wilkerson (of Cross and Switchblade fame) who wrote about Lucifer’s rock trickery in a 1959 issue of an Assemblies of God magazine. For every Youth for Christ rally “Satan is now staging a rock and roll rally!” he said. Even worse, “Satan has used rock and roll to imitate the work of God at Pentecost! In these last days Satan has come down to baptize with an unholy ghost and unholy fire!” Rock shows looked like upside-down pentecostal revivals: “the shaking, the prostration” of the saints “are imitated by this unholy baptism—as far even to speaking in vile tongues!”

Art Remillard said…
Outstanding! The Hell's Bells clip is brilliant. Could the host's mullet and pencil thin mustache be any more glorious? Of course, it would appear as if he was using elements of American cool (80s style) to combat the music of American cool. Becoming the enemy to defeat the enemy?
April 15, 2009 at 5:17 AM

John Schmalzbauer said…
Thanks for a fantastic blog. Finally, somebody is talking about what I perceive as one of the most important connections between religion and American popular culture: the Pentecostal/Baptist roots of the so-called "million dollar quartet" of Jerry Lee Lewis, Elvis Presley, Johnny Cash, and Carl Perkins.

In the several iterations of my religion and popular culture course, I've assigned the Tucker article, as well as Craig Mosher's piece on Pentecostalism and popular music and James Goff's work on Elvis Presley.

Bland Whitley said…
In my previous job, I did a little research on Brother Claude Ely, a traveling Holiness preacher and musician, who is said to have been a personal fave of Elvis's mama. Check out some of his rollicking tunes, here:

Tom Bremer, Rhodes College said…
Great post! I have been teaching a class "Music of Memphis Religions" here in Memphis this semester that looks at a lot of these issues. The class visits a different congregation each week to observe various musical styles, and this week we are headed to the Pentecostal congregation of the Full Gospel Tabernacle led by the Rev. Al Green.

The religious controversies in the 1950s over the emergence of rock and roll, much of it here in the neighborhoods of Memphis, has an interesting parallel decades earlier. The emergence of the blues around the turn of the 20th century caused a similar upheaval in African American churches. In many ways, the concern about "the devil's music" was an old story by the time Elvis came on the scene (who, by the way, often snuck out of his Assemblies of God services to hear the music and preaching of the Rev. William Herbert Brewster, one of the most influential gospel composers of the era, at the East Trigg Baptist Church).
April 16, 2009 at 7:45 PM

Randall said…
Tom, Wish I could take that course. Would be very fun. That's a great point about earlier controversies.

In my Religion and Am Culture class I pair the Jerry Lee-Phillips audio clip with some videos of Jesus Freak stuff on the Katherine Kuhlman Show, circa 1971. Gets students to think a bit about how many evangelicals made their peace with the style of contemporary music, if not the content.