it aired on PBS almost two years ago, Monday is your lucky day. It will be re-airing nation-wide on March 23 (at 9pm in most regions, but check local listings). In the interest of full disclosure, and according to at least one prominent religious historian who I recently met at a conference, I am “much better looking in real life than on T.V.” (Going on TV right after your wife has a baby is tough, and PBS doesn’t have the same make-up budget as American Idol.)

More importantly, have I got a deal for you. As you begin to think about placing fall book orders for your classes, you might want something smart and sophisticated like Blum’s W.E.B. DuBois. 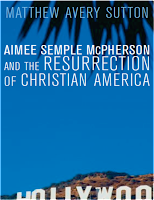 Or you might want something based on impeccable research, like Stephens’ The Fire Spreads. Or you might want something profound like Harvey’s Freedom’s Coming. Then again you might want a great read like Turner’s Bill Bright. But for those of you who are sensitive to these trying economic times, and who really care about your students’ mounting debt, you can order what is cheap. Aimee Semple McPherson and the Resurrection of Christian America is coming to paperback in a few weeks. You can pre-order it on Amazon for a measly $12.89. Your students will love you for it and so will God.