God and the Modern American Presidency

Several months back I interviewed Randall Balmer on his then-new God in the White House: A History: How Faith Shaped the Presidency from John F. Kennedy to George W. Bush, Historically Speaking (Jan 2009). The book is now out in paperback and has grown new legs. Balmer is making the rounds, talking to reporters and pundits about the lessons to be learned from how candidates and presidents have spoken about faith and related to the faithful. (See the Daily Show interview below from Feb 5. Can't believe I figured out how to embed this and change some of the coding a bit. Let me know if it's all scrimble-scrambled.)

Since Johns Hopkins UP has Historically Speaking up and running on Project Muse, the issue, and this interview, are available in full here.
The Daily Show With Jon StewartM - Th 11p / 10c
Randall Balmer
Daily Show Full Episodes
Important Things With Demetri Martin
Funny Political News
Joke of the Day

... Stephens: Did Richard Nixon's Quakerism have a significant impact on his political career and later life? Did commentators note that link?

Balmer: That came up in the 1960 campaign. One hundred and fifty Protestant leaders gathered at the Mayflower Hotel in Washington, D.C., to discuss Kennedy's Catholicism. After this meeting Harold John Ockenga, pastor of Park Street Church in Boston, and Norman Vincent Peale of Marble Collegiate Church in New York City, held a press conference and called on Americans to think very carefully and very seriously before they elected a Roman Catholic to be president of the United States. His faith, they argued, might affect the way he would govern. A reporter asked Peale if those who attended this meeting discussed Nixon's Quakerism. Peale replied with what I'm sure was an unintentionally hilarious comment that turned out to be quite prophetic: "I don't know that he ever let it bother him." . . .

Stephens: Could you comment on the perceptions that voters have about the religiosity of politicians?

Balmer: One of the great mysteries of presidential politics over the last half-century is why it was that evangelicals who helped propel Jimmy Carter into office turned so dramatically against him. As far as I can tell, there were several things going on. . . .

Some other essays in this issue of HS that might be of interest: 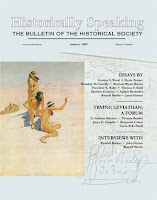 Witch-hunting in the Western World: An Interview with John Demos
Donald A. Yerxa

Displaced from Zion: Mormons and Indians in the 19th Century
Jared Farmer

Anonymous said…
I'm thrilled to see Balmer getting the publicity I think his book deserves. He's an amazing public intellectual.
February 9, 2009 at 9:49 AM

Our Founding Truth said…
samiOne of the great mysteries of presidential politics over the last half-century is why it was that evangelicals who helped propel Jimmy Carter into office turned so dramatically against him.>


Maybe because Carter wasn't a real Christian, and the church is filled with unbelievers.
February 11, 2009 at 12:13 PM

Randall said…
You're probably right about that, ridiculously named, unironic "Our Founding Truth." I wonder where you purchased your "Christian Detector," or God-dar. Do they still sell those at Christian bookstores in Iowa? As I recall these were right between the mountain of end-time books and the Thomas Kincade paintings.
February 11, 2009 at 4:11 PM

Janine Giordano Drake said…
I would have loved to have seen some discussion of faith and the presidency in the age of William Jennings Bryan, Eugene Debs and others who proclaimed Christian ideals yet still lost elections to secularists. It seems to me that faith has been a part of political PROTEST for quite a while, but has only been part of the political establishment since these last thirty years. What do you think? Did William McKinley in 1896 play religious politics better than Bryan, was the country less religious, or did McKinley just win without having to pander to the working class religious people and simply appeal to the middle class moral respectability of religion? I know this is about the world since JFK, but it's also about the "modern presidency."

That's the other thing-- I think a lot of "religion" in the nineteenth century was not about personal faith but that sense of morality that evangelicals today call secular/ humanist. - janine giordano, grad student
February 19, 2009 at 10:39 AM