Give Me Your Ears: Religion and Oral History

As some readers may have heard, the Library of Congress is in the process of compiling an oral history of sermons, speeches, and other orations relating to the inauguration of Barack Obama. It is formally called Inauguration 2009 Sermons and Orations Project, and will be part of the LOC's American Folklife Center. The center is only taking oral materials delivered between Friday, January 16 and Sunday, January 25, 2009. 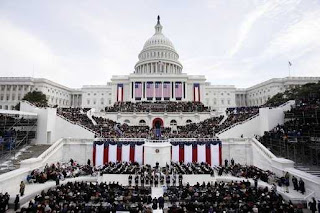 This collection will obviously be of interest to historians and other scholars of religion in America, and the assembly of this collection is certainly interesting in light of the role pastors and sermons played through the campaign season (and since).

Oral religious history (and a sort of corollary, sensory history) has received some attention on this blog before (among others, John Turner's book employs oral history, for example, Paul Harvey commented on this, and the JSR Katrina issue has a bit of oral history). From those in the know I'd love to hear more about the state of the field, or any other thoughts related to religion and oral history (including bibliographic suggestions/leads).

Perhaps a place to start on the blog is Mike Pasquier's insightful methodological post from last September that discusses what he calls "religion-in-the-moment" as well as Rebecca Carter's notion of "spiritual dwelling" and Thomas Tweed's concept of "crossing and dwelling."
Email Post
Labels: civil religion historiography lived religion phil's posts religion and oral history religion and sensory history religion and the 2008 election

Anonymous said…
Can you elaborate on what you see as the connection between oral history and sensory history?
January 9, 2009 at 10:20 AM