What is it about the devil?

Click here for After the Storm: A Special Issue on Hurricane Katrina in the Journal of Southern Religion

What is it about New Orleans that brings the devil to mind? A Baptist preacher by the name of James Raynoldson arrived at New Orleans in 1816 and promptly retreated from what he called “the stronghold of Satan.” A Catholic priest by the name of Michel Portier arrived at New Orleans a couple of years later and remarked how “it would be more consoling to go throw oneself among the savage and ignorant nations, to go freeze in the Canadian and Illinois woods than to work in… the cesspool of the universe.” During the twentieth century, Tracy Fessenden reminded us of Bob Dylan’s description of the Crescent City as a place where “The devil c 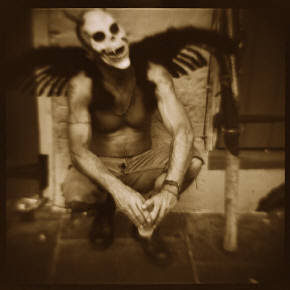 omes here and sighs.” Flannery O’Connor once commented that “If I had to live in a city, I think I would prefer New Orleans to any other—both Southern and Catholic and with indications that the Devil’s existence is freely recognized.” And then there are those organizations like the American Family Association that correlate the devastating aftermath of Hurricane Katrina with God’s wrathful desire to remove Satan from the streets of New Orleans.

The repulsion and attraction of something called “the devil” has quite a history in New Orleans. It also has quite a staying power, as photographer Mary Lou Uttermohlen captured in her piece “The Devil,” shown a year ago at New Orleans’s Jonathan Ferrara Gallery in the exhibition “No Dead Artists.” Scholars have exhibited great eagerness to uncover the layers of meaning behind conceptions of Satan in premodern and early modern societies (see John Putnam Demos’s Entertaining Satan and Fernando Cervantes’s The Devil in the New World). But it was different then, right? People really believed in that sort of stuff. But what about now? Where are the academic types when you need them? Maybe it’s just me, but it appears as though the artistry and imagination (among other things) required to conceive of such a supernatural entity—or to grasp those who conceive of something so seemingly foreign to the modern world—makes most scholars (myself included) more than a tad uncomfortable. 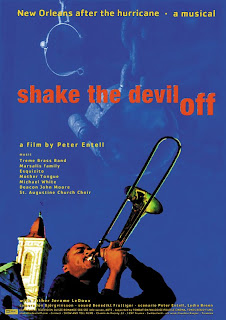 And that’s why I will leave such questions to people like Peter Entell, director of the documentary film “Shake the Devil Off.” Set in New Orleans six months after Hurricane Katrina, Entell documents how the community of St. Augustine Parish opposed the decision of Archbishop Alfred Hughes to close one of the oldest African American Catholic churches in the United States. At a particularly poignant moment in the film, after the forced removal of their African American pastor Jerome Ledoux, parishioners begin singing the spiritual “Shake the Devil Off” during a mass celebrated by the archdiocese’s new appointee overseeing the closure of St. Augustine. The replacement priest leaves the altar to the applause, singing, and dancing of the parishioners. In this case, the devil is the church and the people doing the shaking are also the church. It all makes for a compelling story, one that can help students and scholars of religion decipher another brushstroke in a larger portrait of the devil in modern America. For more on “Shake the Devil Off,” you can read Zada N. Johnson’s review or my interview with the director in the Journal of Southern Religion. Or you can watch the film's trailer.

It’s worth noting, if it weren’t already obvious, that the devil in the minds of the parishioners of St. Augustine contrasts with most conventional representations of “evil.” I was reminded of this discrepancy as I drove down Interstate-10 this afternoon through the rainy aftermath of Tropical Storm Fay over the Atchafalaya Basin in south-central Louisiana. I was listening to the radio program American Routes when Nick Spitzer started playing Eddie B 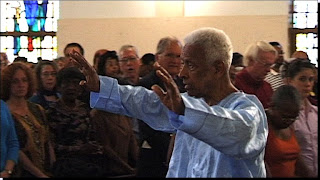 o’s rendition of “When the Saints Go Marching In.” Speaking of his hometown for the PBS series River of Song, Bo said, "There's that mysticism, that little extra beat that you can always tell comes from New Orleans. It's an extra beat inside the beat that we can't seem to explain to people. We call it a stutter step, that extra step that the second liners do. We incorporate that from when we are children, and when you hear it, then you know it, 'cause there's only one set of people that's able to bring that forth, to incorporate that extra little thing that's going on in there. Mister, you can tell New Orleans anywhere you go."

I like your questions about why we are hesitant to understand the devil or the supernatural in the contemporary period. I think of Christine Heyrman's _Southern Cross_ and her descriptions of how people felt the presence of the devil lurking behind their every move or the auditory experience of clacking hooves (obviously, the devil had hooves not mundane human feet) in their homes. How do we speak about these experiences now?

I know I get nervous when folks describe their experiences of the devil, and my students are highly skeptical about any description of this phenomena. I use Pamela Klassen's work on home birth, and she describes how some of the Pentecostal women described morning sickness as an attack by the devil. My students could not imagine how these women could believe something so "silly." As someone who has suffered through morning sickness, I could understand it being the devil's work :)

Yet the devil is still present in the lives of religious Americans. How do we understand this vision of the supernatural juxtaposed against the exposed and documented lives we lead? How do we account for the devil in people's lives when we don't feel the lurking or hear the clacking? This is wonderful post that allows us to ask such questions. Now, how do we answer them?
August 26, 2008 at 9:47 AM