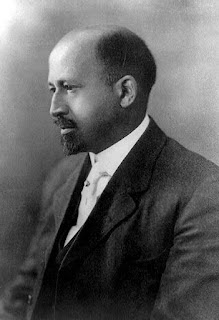 Since reading Ed Blum’s W.E.B. Du Bois, American Prophet last June, Du Bois has been on my mind, on my research radar, and was a part of my teaching this past year in new and I hope interesting ways. So in this post I want to think about the extent to which historiography informs our teaching, and how it shapes and inspires our pedagogy.

Admittedly, before making my way through Ed’s book, Du Bois occupied staple places in my teaching of U.S. history (e.g., Du Bois’s debates with Booker T. Washington, Du Bois as founder of NAACP, Du Bois as Pan-Africanist, etc.). But that changed drastically when, thanks to Ed’s intriguing and compelling arguments, I began to see Du Bois as something more than merely a writer, an activist, an organizer, and an intellectual—I began to see Du Bois as a prophetic figure, a spiritual sage, a religious thinker—and how religious conviction influenced his activism, organizing, propaganda, and intellectual pursuits.

So last summer and fall as I read tons and tons of Du Bois, I began to think about Du Bois in the classroom, and began to contemplate ways to reconfigure my lectures, discussions, and assignments to make use of these new discoveries. Here's what I came up with for the spring 2008 semester.

Given time frame (2-3 days) and grade level (sophomores, juniors, and seniors), I settled on 4 short readings: "Credo" (1904), "The Forethought" from Souls of Black Folk (1903), and two short stories from The Crisis: “The Sermon in the Cradle” (1921) and “The Son of God” (1933). I opted for the shorter readings so as to cover Du Bois in a different kind of breadth, as well as to offer a challenge to students—given the religious dimensions of the readings—to think about Du Bois’s ideas both in literature and religion classes.

In terms of the units that structure my class, I introduced Du Bois during the Interwar unit as I felt this allowed me to discuss him with considerable leverage—glancing back to his work in the late 19th and early 20th centuries, while focusing on his life as editor and propagandist in the 1910s, 20s, and 30s (and then later framing the interesting juxtaposition of his death in 1963 on the eve of the March on Washington). Situating Du Bois as I did, I hoped, would also provide considerable context for the Crisis short stories.

For the sake of brevity, I’ll limit the main points of discussion below to one of the two short stories I assigned, as Blum effectively narrates “The Son of God” in American Prophet (ch. 4).

The first day’s lesson began with a relatively quick overview of Du Bois’s life via PowerPoint and blogpost (I specifically referenced the interactive map and the FBI files in class; students followed other links on their own time). I concluded the class with a brief discussion about Du Bois’s relationship with and to religion and ended with a reading and class discussion of "Credo." As for Credo, I asked students to think about context—how the ideas, phrases, images, metaphors and the like reflected some of the major social, political, and racial issues of the early 20th century. I also noted its parallels with early Christian creeds, statements of faith Du Bois would have recited or heard recited in the Episcopal liturgy he knew well (for more on this see Blum, pp. 28-31). This set the stage to discuss Du Bois’s configuration of “twoness” and the veil metaphor from Souls, followed by comments about using “Souls” in the title of this most important book (see American Prophet, ch. 2 for a fuller discussion of Souls). 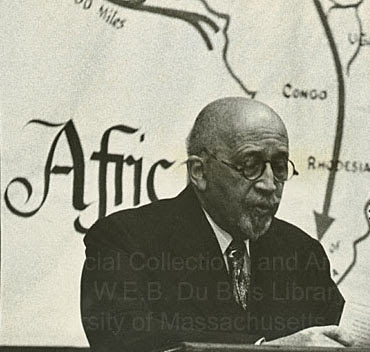 The first short story students read, “The Sermon in the Cradle,” appeared in the Christmas 1921 Crisis number. This story retold Jesus’ birth as if it happened under British colonial rule in Benin. Wise men came from the East to inquire about this “new Christ,” which then troubled the Prime Minister and other officials. In the story, Du Bois rewrote the Nativity prophecy from Isaiah: “And thou Benin, in the land of Nigeria, art not the least among the princes of Africa: for out of thee shall come a Governor, that shall rule my Negro people.” The star later guided the wise men to the birth site (“in a house”), and upon seeing this new African Christ, worshiped and presented gifts—“gold and medicine and perfume,” presents with symbolic significance and practical value. All of the wise men then left (warned by God in a dream not to return to London), except one black wise man who was from Benin. He “lingered by the cradle and the new-born babe,” Du Bois wrote. Eventually “the multitudes” showed up and the black Christ child broke into sermon, as Du Bois reconfigured Jesus’ Sermon on the Mount:

After reading this story aloud in class, I then posed several questions, and along with discussion aimed to highlight the following points:

First, the date of publication in the December 1921 issue. Many of Du Bois’s short stories about a black Christ appeared at particular times of the year—in December and in April. Du Bois himself understood the significance of Christian celebrations and the liturgical cycle, and some of his readers no doubt did as well.

Second, “The Sermon in the Cradle” is yet another instance of Du Bois retelling the life of Jesus as a black Christ. For comparison, and also part of a subsequent lesson, I reminded students that Countee Cullen and Langston Hughes, for instance, also wrote about black Christs in the 1920s during the Harlem Renaissance.

Third, Pan-African and anticolonial movements were underway during the 1920s, and as is well known Du Bois understood World War I to be in part a colonial conflict and sought and pursued solidarity internationally. What’s more, Du Bois organized the first Pan African Congress in Paris in 1919 and another in 1921 and so this story is a clear indication that these issues were on his mind at the time. And of course it is significant that Du Bois chose the story and teachings of Jesus as one way to creatively narrate these larger global concerns. This begs the question, particularly in light of his life’s work: for Du Bois, was salvation to be found in Africa?
Fourth, and finally, the reformulated Sermon on the Mount highlights Du Bois’s explicit focus on the ethical dimensions of Jesus’ teaching, perhaps another example of Du Bois as a “religious modernist” (American Prophet, p. 160). There are no miracles and “The Sermon in the Cradle” is devoid of divinity: social and economic justice will eventually come for those subject to hurt and wrong, and even though there existed a deep thirst for vengeance, Du Bois placed God on the side of Black Folk since “the world has ridiculed its better souls.”

Whereas “The Sermon in the Cradle” focused on Africa and the globe, the short story “The Son of God”—published in the December 1933 edition of The Crisis—quickly narrated the course of Jesus’ life, from birth to death. In it are familiar characters: Joe and Mary are the parents of Joshua, a carpenter from the South who uplifts the meek, tends to the poor and disheartened, and blasts rich folks by saying they won’t be in heaven. Yet the end of the story claimed the death of Jesus and its redemptive elements for an (African) American context as it concluded with the lynching of Joshua—“Behold, the Sign of salvation, a noosed rope,” Mary said. (I also showed students some of the lynching artwork from The Crisis, some of which carried the same message as “The Son of God.” Follow this link to see one example of this artwork, and see ch. 3 of Amy Helene Kirschke's Art in Crisis. ) 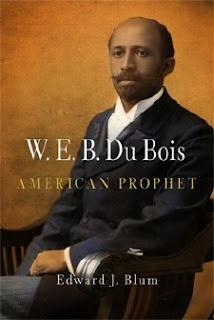 Reading “The Son of God,” coupled with discussion of lynching in my unit on the Gilded Age and Progressive Eras, I hope added significant texture to my teaching of early 20th century American history. In the end, enlivening discussions with my students about literary and artistic responses to lynching led to new thoughts about Christianity’s complex and contested role in late-nineteenth and early-twentieth century American culture.

To conclude: well beyond his storied debates with Booker T. Washington and his instrumental efforts in the early years of the NAACP, for example, inspired by Blum’s work my students were able to see how Du Bois creatively, engagingly, and prophetically responded to the events, trends, developments of his time, and hence gain a better grasp of American (religious) history. Also, as I teach at a religiously-affiliated college preparatory school with required classes on biblical interpretation, after reading about Joshua and the birth of a black prophet in Benin, the Euro-American Jesus with which my students are most familiar became a far more complex and problematic figure. I hope to expand upon this dimension of my classes in future years, drawing insights from Paul Harvey and Ed Blum’s forthcoming volume on racialized images of Jesus.

In the end, adding these elements to teaching Du Bois I hope allowed for a more layered analysis of the multiple issues of his time, utilization of my own interests and research in the spirit of uncoverage, and the incorporation of new historiographical insight to the classroom.

So, as we conduct summer school here at the blog, where does Du Bois fit into the narrative of your classes on American religion, or American history? What texts do you use to teach Du Bois and his life and times? Any tips and/or strategies to share?
Email Post
Labels: african american religion DuBois historiography pedagogy phil's posts religion and race religion and scholarship teaching resources