It seems that Newsweek's on a roll this week for Mormon coverage. In a previous post today, Art highlighted the article on Short Creek and its law enforcement legacy. Another article, "America's Next Top Mormon," trumpeted the prominence of Mormons on television. (They are everywhere! American Idol! Dancing With the Stars!) The author, Sally Atkinson, sees a surge of Mormon contestants on reality television as signal of LDS's growing (pop) cultural dominance. While I am not convinced by her thesis, I am intrigued by her reaction to Mormons invading our precious reality T.V. programs. Does this (gulp) mean Americans want wholesome, religious competitors on shows like Rock of Love or Big Brother? The wholesomeness (no rated "R" movies!) is part of where Atkinson thinks the appeal lies. Atkinson writes:

Wholesome, likable Mormon competitors are now so plentiful that some viewers have taken to playing Spot the Mormon. Former "Idol" contestant Carmen Rasmusen, herself a Mormon, says one of this season's early episodes set off her Mormon radar when she heard White tell the judges she'd never seen an R-rated movie. "My husband and I just looked at each other and said, 'She's totally Mormon.' I mean, who else would say something like that?" With 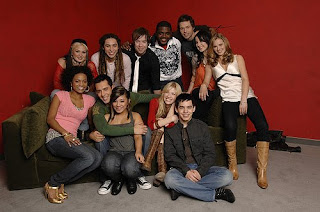 all the conniving, back-stabbing and sexuality on reality TV, it may seem like a strange place for Mormons to congregate. That cultural disconnect is obviously part of the attraction for viewers and casting directors alike. Take the strange spectacle last month of a beautiful young Mormon woman— the "Idaho virgin," as she came to be known—sucking the toes of the eligible bachelor on MTV's racy "That's Amore." Or the contestant on this year's "America's Next Top Model" who said maybe her elimination was for the best, as she would have been uncomfortable doing a nude shoot. But for Mormon contestants themselves the motivation is more complex, whether it's testing the limits of their religion, showing America that Mormons aren't the insular community they're often perceived to be, or the one that crosses all denominations: the hunger for fame. 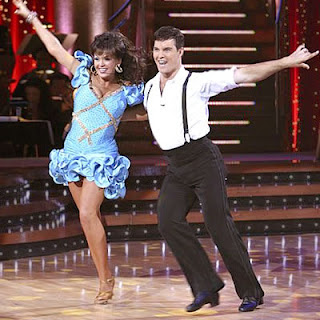 the Church of Jesus Christ of Latter-day Saints is in a sweet spot demographically: still small enough that members get excited to see one of their own in the spotlight, but large enough that when they watch together and vote they can affect results and ratings. Mormons reserve Monday nights for Family Home Evening, and when Marie Osmond competed on the family-friendly "Dancing With the Stars" last year, she benefited from having the voting fall on a Monday each week. In fact, all three Mormon contestants made it to the final four that season.

While "Idol"'s voting night is Tuesday, some Mormons around the country still get together for viewing parties and pour in the votes after each show. "Idol"'s producers won't disclose voting numbers, but Rasmusen says producer Ken Warwick once stopped her before a results show and told her she usually did pretty well in the East Coast voting but that her "numbers just soared" when the mountain states kicked in. "I was so happy to hear that people were voting like crazy and supporting me," she says. "Utah does a great job rallying around its people." Lauren Faber, an eighth-grader in Provo, votes for Archuleta as many times as she can each week for at least 20 minutes, "no matter what—even when he messed up that once." That will undoubtedly be music to Archuleta's ears, although last week Osmond spoke out in the church-owned Deseret News, saying that White and Archuleta should be judged based on their talent, not their religion. "I mean, you don't hear other people saying, 'One of the finalists is a Catholic' or 'One of them is a Presbyterian' or 'One of them is Jewish'."

But Mormons don't do well only on shows where the audience votes. "There must be something about the Mormon community that makes these people so self-confident and so open," says Lynne Spillman, a casting director for "Survivor" and "The Amazing Race." She thinks that coming from a large family probably helps in a game like "Survivor," with its complicated group dynamics mirroring sibling rivalries. "They also have these incredible experiences through their missions," she says, "and can relate to being dropped off in the middle of somewhere they've never been and having to make it."

I am curious to what our readers and contributors think about this piece. It strike 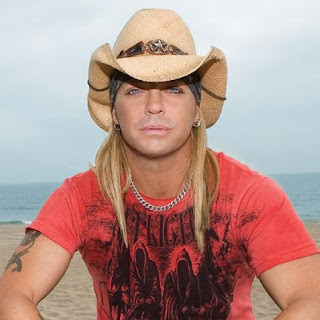 s me as exoticizing Mormons by pointing out their (gasp) normality (Katie argues "charmed observance" can sometimes function for naughty purposes in this post). Am I hyper-sensitive because of the FLDS media coverage (more on that to come) or my tendency to look for the nefarious because my own research? Or is there something else going on in the need to document the Mormon presence on all these shows? Are Mormons becoming mainstream, at least in pop culture, as Atkinson seems to suggest? I am just not sure, but now, I will be on the lookout for the religious commitment of my favorite reality T.V. show "stars." Perhaps, Rock of Love will add a lovely Mormon to the cast, but for some reason, I doubt it.
Email Post
Labels: baker's posts Mormons religion and popular culture religion and television snarky posts

Art Remillard said…
While it's outside of the reality realm (something has to be), Big Love could be added to the Mormon pop culture list. However, as you mentioned before, it reflects a non-Mormon obsession with polygamy. Still, for me, it took a while but I've come to enjoy the show. I started watching Big Love right after I finished the Deadwood series. Who knew that HBO can produce something without gratuitous cursing and violence...
May 8, 2008 at 3:22 AM

Anonymous said…
During the presidency of Gordon B. Hinckley, Mormons were encouraged to be more active in their communities and to become more "mainstream." One of Hinkley's biggest goals was to portray the Mormon Church as more mainstream. I wonder how much of the Mormon pop culture "explosion" is related to that.
May 8, 2008 at 12:43 PM