"A Modern Day Prophet," Or Hearing George Michael Sing In Our Living Rooms

As the writer's strike drags on (but might possibly finish), the major networks are running new shows to satisfy our (or possibly just my) T.V. watching needs. One of which is Eli Stone, a show about nervous "modern day prophet," who has visions of George Michael belting out familiar pop songs while upon a coffee table as well as auditory cues ranging from Michael's "Faith" to organs and boys' choirs to gunfire. Stone is a lawyer in a well-established firm, which primarily defends mean corporations from damaging lawsuits. Not surprisingly, the sounds and visions prove 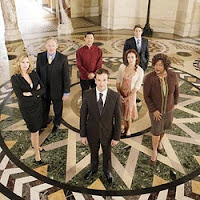 troubling to the young, once idealistic lawyer. He visits an acupuncturist, who is actually California born and bred and wears the clothing and accent to prove it. The show is not aiming for critical acclaim and relies upon Eli's blustered encounter with the "bells and whistles" of religious phenomena. Eli's visions might come from the divine or, possibly, are side effects of an inoperable brain aneurysm. This prophet proves to be my favorite kind, reluctant, self-effacing, and confused. He cannot decide whether to embrace this experience of the divine or to blatantly ignore Michael's singing and clapping. The show examines how these visions move Eli to taking on underdog cases against evil corporations (for the first two episodes at least). The success and failure of these trials echo with a warm, fuzzy version of morality in which the frazzled mom bests the vaccine maker and illegal immigrants become citizens through Eli's bravado and conviction. Justice can be achieved through speeches that rely on faith and our compassion for other human beings. Judges and juries fall prey to Eli's charm and earnestness. The bad guys are nominally bad, and the good guys are, well, good. Social justice never seemed so civil. Eli Stone proves interesting to me not because of the saccharine morality tales, but instead, Eli's reaction to his religious experience.

The main character is bewildered and disturbed by the song and dance of 1980s pop star. His face contorts into a myriad of expressions when confronting concerts and choirs in the lobby of his firm. He even leaps out of the way of a plane, which flies too close to the sidewalk in a crowded, urban setting. Jonny Lee Miller, who plays the eponymous prophet, tilts his head to the side in these encounters in an attempt to

determine if these sounds and visions are reality. As I watched both episodes (available online for the curious), Leigh Schmidt's Hearing Things: Religion, Illusion, and the American Enlightenment (2000) came to mind time and again. Schmidt's deft work explores the realm of the auditory for both Enlightenment thinkers and often avowed skeptics as well as the religious peoples, who believed that they could hear the voice of the divine. Hearing "things" signaled divine intention and intervention in one's life, and religious peoples, from clergy to laity, claimed this gift and ability. The supernatural invaded the realm of the natural via the ear. Hearing, not seeing, was believing. Yet hearing became pathologized. Voices were signs of mental illness, instead of the hand of god. Hearing remained a religious purview for some, but for many, the auditory became guarded. These voices dissipated into the air from which they had previously come. Watching Eli Stone, for me anyway, seems to be a case study in Schmidt's argument. The cast of characters on the show mediate between the extremes of the skeptic and the believer. The skeptic, primarily Eli's physician brother, arches his eyebrows in disdain and slight humor when sounds and visions are discussed. The believer, represented by the acupuncturist, looks for the larger meaning of planes and organ music. Those, who rest between the poles, shift between empathy to Eli's "condition" and concern for his well-being to frustration with his willingness to believe. His soon-to-be spouse humors Eli by asking what he is hearing when his head tilts so knowingly. "Gunfire," he replies, and she smiles.

Her reaction, the accepting smile, characterizes much of my reaction to those who purport hearing voices, receiving visions, or other more fantastic abilities. I smile because it is the only reaction with which I am armed. My mother bred politeness into the core of her three daughters, and the smile reflects my polite reaction to the miraculous. It is not dismissive, but the smile is not a knowing one either. The show presents the problem of the prophet in the twenty-first century (how to accept the reality of voices and visions in our technological world), but it also reflects the reaction to the intrusion of the divine in the so-called natural world. Eli's relatives, co-workers, and his fiancée all process his earnest account of sounds that they cannot hear. Eli is not completely convinced either, but he is moving in the direction of belief. The show's vivid displays of sounds and sights give the audience Eli's perspective of the world, and the difficulty his experiences will likely cause him. (Some of his co-workers seem to think their colleague suffered from a nervous breakdown.) The show, thus, gives the viewing audience a perspective that the religion scholar cannot inhabit. Our conversants and historical actors can describe their experiences to us, but we do not get to hear the sounds of gunfire or the infectious "Faith" first hand. We get words or images created by the prophet, in Eli's cause, or believers, but not the auditory evidence. Eli Stone proves entertaining to me because I get to hear through his ears and see through his eyes. As I watch the reluctant "modern day prophet," my smile is knowing rather than polite. And I wonder how much easier my task as a scholar might have been if I had chosen to study the tangible or if the intangible might become tangible just for an auditory moment.
Email Post
Labels: baker's posts religion and film/television religion and popular culture