You Know You’re The Only One That Can Really Help

I stopped getting into scraps after a fourth-grade tussle regarding Potawatomi Indians. So it was surprising when I found myself getting heated recently on the coast, sparring with a reasonably genteel gent about vocabulary. Not because I don’t make fetish of word (clearly) but because Midwestern pleasantry has, over the slow advance to adulthood, trumped cracker instinct. Save the squabble for righteous spaces, I tell myself. Funnel the fight into better productions.

Yet there I was, raging about the use of the word “cult.” “Why can’t we use it?” my interlocutor gently (genteel, after all) pressed. “I mean: they are cults.” He deployed the usage card, pointing to excellent ongoing application by observers intent upon venerated saints and ancient Gnostics. Moreover (he pressed) some things just are clandestine and weird, like Shakers and Henry Jaglom films. My resistance to the word “cult” is, under such a preponderance of cheery evidence, a well-intentioned but patronizing cling to political correctness, parallel to my relinquishing of “retarded” and “gay guy.” C’mon, already, (my discussant cajoled) the word is useful.

There are days when the words are on your side, and there are days when you sound like Porky Pig. This day, this important day of argument and defense, was a Porky day. I couldn’t lasso together what I wanted, which was, of course, a rehearsal of the history of this category, the way academicians eschewed its deployment because they realized, simultaneously, that it (a) wasn’t generative to classification, (b) relies on an antagonistic relationship between a (presumed to be) minority faction against a (presumed to be) dominant mainstream, (c) expects an exclusive spiritual adherence amidst sociological reality of the buffet believers and (d) was being enjoyed as an epithet—to truly destructive ends—by way too many people. (Note: For a recent rehearsal of this history and the nouveau resuscitation of “cult”, see the 2006 JSSR review essay by Marion Goldman, "Cults, New Religions, and the Spiritual Landscape.")

But my words weren’t with me, so I came off tinny and small (a perpetual condition for liberals and word whiners). If only I’d had patience. If only I’d merely say, “hey friend, let’s save the argument. Bide our time. And wait for the release of Tom Cruise: An Unauthorized Biography.” 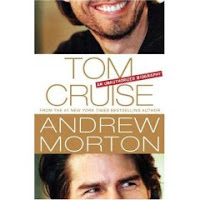 Then, I would have experienced the pleasure of non-argument exhibition. Anyone who thinks we can reclaim “cult” (like those who thought, hipster-like in the mid-nineties, that “Negro” would be fun to revive), do take a break and check out the responses to Morton’s religious history of Cruise, as well as the frightening replies to Cruise’s commitment video spinning throughout the web.

Don’t get me wrong: the video is something to see. (And something to use: religionists never had it so good). The man knows his way around onomatopoeias and crazed laughter. But, after all the chuckles at his gauntlet glee (“You’re either in, or you’re out.”) and the frets about Ms. Holmes’ captivity narrative, one does just have to say: “He believes.” Or, as the wise observers at Slate have it, this is only “moderately strange.” We’ve seen this all before. Impassioned faith should hardly be new to anyone awake on this here planet Earth yet off the bloggers soar, screaming and laughing and shaking with pleasure that this obviously “gay guy” is such a total “cult freak.” So now I, post-Pork, have my words to face my cultic foe: “we are the authorities,” and we say "no" to cults. Save that sort of devotion for (the oh-so-deserving) Dr. Frank-N-Furter. 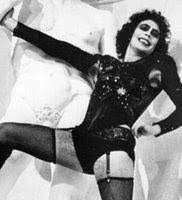 Anonymous said…
I can see why your interlocutor wasn't impressed with your attempts.
January 19, 2008 at 8:20 PM

I think I get your point that the comments prove the point that "cult" is a too-loaded term, and they also show that the terms is, in fact, "useful" if you want to make slurs or easy dismissals. Can you explain what it means that the category is not "generative to classification"? I have to admit that though I understand these two terms separately, I don't get what they mean together.
January 20, 2008 at 5:53 PM

Kathryn Lofton said…
Thanks, Brett! All I meant by (1) was that "religion" is a category which has produced a lot of classificatory excitement (think of all the types of religion one can conjure, as well as all the components of religions that theorists have described) whereas from my reading of the literature, "cult" is a pretty narrow word, including few groups or people into its auspices. "Generative" here mainly meaning that you want to work harder to think more; "cult" makes you think less, "religion" presses for more.
January 20, 2008 at 10:54 PM

Brett Hendrickson said…
Thanks very much for your response and for this very generative post.
January 21, 2008 at 6:13 AM

Anonymous said…
I agree completely with Lofton here. The word cult is usually used to suppress intellectual inquiry, rather than cultivate it. Regarding scientology, for instance, we should be investigating it no different than we would the followers of Father Divine or the missions of Presbyterians. And unlike anonymous or Katie's interlocutor, I was certainly impressed.
January 21, 2008 at 7:23 PM

Much like the effect of jumping up and down on a couch during a daytime talk show, employing the word "cult" usually destroys any intelligent examination. It invalidates a person's beliefs, whatever they may be. And on this day to celebrate the dream that we may all sit together at the table, we must heed the voices (like yours) that warn us against ostracizing others and quieting discussions.
January 21, 2008 at 10:52 PM

Art Remillard said…
I'm with Brett, et al. Sometimes it's necessary to use different words to avoid culturally loaded terms. It's not ideal, but sometimes we must be practical. It reminds me of the first time I taught World Religions. I was lecturing on Buddhism, and the author called Theravada "spiritual atheism." He distinguished this from "theoretical atheism" and "functional atheism," saying that Buddhists tend to avoid speculation about divine presence. In the lecture, I fell all over myself explaining that this form of atheism is different from what they were probably used to. I repeated the author's distinctions, gave examples, and kept emphasizing the uniqueness of "spiritual atheism."

Anonymous said…
Plenty of Buddhists would agree with a description of Buddhism as "godless." Be careful not to over-correct your students!

And I don't know why ceasing to use "cult," or using "different words to avoid culturally loaded terms," is less than ideal. Since when was it an ideal to lump a whole bunch of differences into sameness (a sameness that does only one thing: differentiating them from "religion" proper).

Not all Buddhists think the same, and not all minority religions (whether wacko, brilliant, or completely bland) deserve to be grouped into one term that is something other than "religion."

Anonymous said…
i completely agree with lofton, but i gotta say i'm itching to start up a lofton-loving cult myself.
January 22, 2008 at 11:20 AM