Skip to main content
Posted by Cushwa Center for the Study of American Catholicism July 23, 2019

Report from the Field: The 11th Triennial Conference on the History of Women Religious 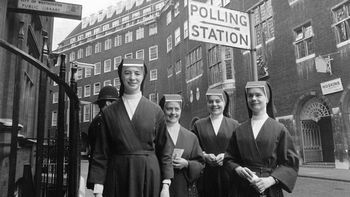 Grace Doerfler is a rising sophomore at the University of Notre Dame and a history major. She is interested in the role of women in the Catholic church & oral histories of women religious.

On June 23, historians, archivists, and scholars from around the world convened for the Eleventh Triennial Conference on the History of Women Religious.  Fittingly gathered on a campus replete with the legacy of women religious, Saint Mary’s College, founded by the Sisters of the Holy Cross, attendees spent four days immersed in more than thirty panels.  This year’s conference theme, “Commemoration, Preservation, Celebration,” noted the centennials of women’s suffrage as an occasion to honor the history of women religious and the ways that they have shaped global Catholicism.

The conference was alive with the memories of sisters through history.  With each day of the conference, presenters called on their audiences to envision the ongoing richness that women religious bring to the Catholic Church and to the world.  Paper topics ranged from congregations’ work to commemorate their sainted sisters; to current efforts to preserve and organize inclusive, accessible archives; to the ongoing task of navigating the relationship between women religious and their lay associates.  Presenters emphasized the importance of identity, trust, and strong relationships in the work of preserving and celebrating the rich legacy of women religious.

In an engaging keynote address to open the conference, Colorado State University’s Ann Little used the story of Esther Wheelwright, an 18th-century Ursuline sister, to frame the story of Catholic women as “open, vast, and inclusive.”  Noting the importance of including material sources and non-English sources in studying Catholic history, Little invited the audience to “widen our lens” and paint a vaster portrait of early American Catholicism, encouraging listeners to go outside traditional archives and sources.  “The difference that women make is that they see other women and include other women,” she said, arguing that the history of women religious is particularly inclusive and inviting for this reason.  Little urged those present to research and tell the stories of new “exceptional figures” in early American history— like Esther Wheelwright— because they, and not just the founding fathers, make up an integral part of the early American story.

Like Little emphasized in her keynote, many of the presenters focused on the need to ensure that women religious are included in the historical narrative.  Sisters’ contributions have historically been largely overlooked, their work often diminished by national anti-Catholic sentiment or patriarchal power structures within the Church.  Indeed, Little noted that many American Catholic historians of the 1980s and 1990s were “almost apologetic” about their work, uncertain of finding a welcome place in history.  Now, especially as the demographics of Catholicism— and especially of women’s religious life— shift, sisters and historians alike have a palpable sense of urgency in recording these narratives.

This year, many presenters envisioned new collaborations with archivists as an important part of the work ahead.  Historically, archives have been notoriously inaccessible, but with mounting uncertainty about the future of some congregations, and a growing recognition of the need to preserve orders’ stories, that may be changing.  Many archivists were among the new faces welcomed to this year’s conference, indicative of the increasingly collaborative relationship among sisters, archivists, and historians.

Margaret McGuinness argued strongly for a more collaborative and open approach to using archives, noting that archives have rich resources to share with historians of subjects from the Civil Rights movement to the history of American education.  Especially in the face of dwindling vocations in the United States, McGuinness and her fellow panelists stressed the importance of inter-congregational approaches to archive preservation.  Archivist Malachy McCarthy explained that charism-based archives have been proposed as one possible solution to the “impending crisis” in religious communities’ archives.  As congregations look for new ways to preserve their records, presenters stressed that establishing trusting relationships is an integral part of ensuring that sisters’ stories are told.

In addition to the emphasis on collaboration with archivists, presenters at this year’s conference also recognized the importance of engaging young people in the legacies and ongoing work of women religious.  For Katie Bugyis and Ann David, the work of sharing the stories of women religious with high school students is among the most pressing tasks.  As part of the National Catholic Sisters Project, Bugyis and David have created a free online curriculum, Called and Consecrated, to ensure that young people learn about women religious.  Designed to be a helpful tool for all who teach religious education, the curriculum responds to the reality that most young people today never have the opportunity to see or meet a religious sister.  Called and Consecrated introduces young people to the lives of sisters and seeks to show students that they have many desires and goals in common with women religious.

Katie Gordon, a national organizer of the Nuns and Nones movement, recognizes a similar connection between sisters and spiritually diverse millennials.  Perhaps an unlikely match at first glance, Gordon said, “We found a home in one another’s stories.”  With common desires for social justice, meaningful community, and spiritual fulfillment, millennials and sisters discover, as one sister put it, “Surprise!  We’re soulmates.”  Participants learn from and energize one another, building new forms of community.  Like the historians present at the conference, Gordon and her fellow millennials have been entrusted with the stories of women religious, and Nuns and Nones holds a unique place in passing on sisters’ legacies for new generations.

Looking to the future, some sisters are blunt about the reality of dwindling vocations, saying, “God may be calling us to completion.”  Despite fewer vocations to women’s religious life, women religious and their collaborators in mission now seek new ways to pass on their charisms for new generations.  Honoring saints in the history of women religious is among the ways congregations seek to carry on their missions.  “Canonized American Sisters: How Congregations Commemorate, Preserve, and Celebrate Sainted Sisters’ Legacies,” a roundtable with scholars representing each of the United States’ six sainted sisters, discussed the work of honoring these saints in the 21st century.  Joan McGlinchey, MSC, said, “We have hope in sharing our charism in new places.”  Although sisters anticipate that religious life will look different in the future, they are confident that their charisms and witness will live on in the examples of these saints.

On the final evening of the conference, Eileen Markey, investigative journalist and author of A Radical Faith: The Assassination of Sister Maura, offered a riveting keynote about Maryknoll sister Maura Clarke and the importance of telling sisters’ stories.  Women religious, she said, can show us the path forward out of a broken Church, and they offer proof that lay women have always led in the Church and shall continue to do so.

The conference’s attendees went their separate ways on June 26 energized by panel presentations and conversations with new connections that boldly crossed disciplines, traditions, and generations.  The four days at Saint Mary’s College had been spent learning from and sharing the scholarship of a diverse group of historians, archivists and many others.  As the 2019 CHWR drew to a close, the participants left South Bend with new ideas and collaborative possibilities, inspired to continue the invaluable work of commemoration, preservation, and celebration.