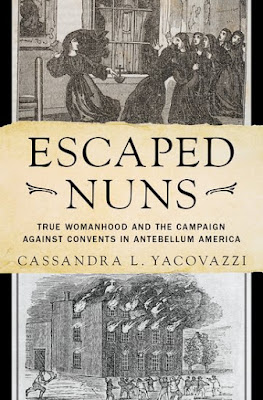 I recently exchanged emails with Cassie Yacovazzi about her new book, Escaped Nuns: True Womanhood and the Campaign Against Convents in Antebellum America (Oxford, 2018). Cassie Yacovzzi is Assistant Professor of History at the University of South Florida, Sarasota-Manatee. She Studies the intersection of cultural, religious, and women's history in the nineteenth and twentieth-century US.


PC: Escaped Nuns  situates its topic in a much deeper set of contexts. You show that the anti-convent moment and broader anti-nun sentiments must be placed in the larger drive for reform in the antebellum period. "Presenting something -- anything -- as a threat to female purity, marriage, and family served to legitimize any reform measure, from antislavery to temperance to anti-Catholicism," as you write on page 56. Is a concern for the role of women and the stability of marriage at the center of antebellum reform? How does anti-Catholicism, as you've studied it in Escaped Nuns, changed the story?

CY: Researching for this book changed the way I understand antebellum reform movements, convincing me that concern for the role of women and what we might now call the nuclear family were at the center of the benevolent empire. Temperance advocates emphasized the ways in which alcohol threatened women’s safety and the home (which of course, was often true). Reformers signed a “Family Temperance Pledge,” featuring a contented husband, wife, and child, in a respectably furnished parlor. Advocates for the Common School Movement sold Americans on the idea of public schools by suggesting that the school was an extension of the home and that teaching would prepare women to be good wives and mothers. These same desires to preserve the home and keep women in domestic roles animated efforts to combat prostitution. I couldn’t help but notice similar themes in anti-nun sentiment. Convents were “bad” because they kept women from being wives and mothers. In the eyes of many Protestant reformers, nuns’ sexual purity was at risk before “licentious” priests. The convent, presented as a gloomy, lonely, unsafe place, contrasted sharply with the cheery, loving, safe home. Convent narratives served as warnings to women about the dire repercussions if they chose this life. In a quickly changing and young nation, many Americans felt considerable vulnerabilities about the future. Ensuring women’s place in the home and thus maintaining control over them, rather than surrendering that control to a priest or the allures of growing urban centers, offered some sense of security. Anti-Catholicism and in particular the anti-convent campaign cannot be understood apart from these pervasive concerns for women and the home.


PC: Why, despite the efforts by researchers to debunk the claims of the literature, did Americans continue to believe and consume this literature? How does the historian try to understand how so many Americans believe what is perhaps pretty obviously not true? What explains the strength of this anti-Catholic culture in the face of efforts to explain what nuns (and priests) are really like?

CY: After Awful Disclosures was published, critics of the book made strident efforts to discredit it. They gathered affidavits from Maria Monk’s mother and members of the Montreal community (where the Hotel Dieu was located). A prominent Whig newspaper editor launched an investigation of the convent and published a book-length denunciation of Awful Disclosures. Despite the overwhelming evidence debunking the book, Americans continued to read and believe Awful Disclosures for years to come. The historian makes sense of this in part by thinking like a psychologist. Our biases often inform the way we see the world. We’re prone to believe the things that reinforce our worldview and discount the things that don’t. Many Americans were already inclined to believe the worst about Catholics. Awful Disclosures confirmed their fears while also offering titillating entertainment. Many Americans were also susceptible to the emerging sensational news and novels of the printing revolution. Awful Disclosures was a best-seller at a time when new, cheap printed material was becoming more widely available. Finally, for many Anglo-American Protestants, Catholics and in particular nuns were the “other.” They were mostly the immigrants, rapidly changing the demographic of the nation. Nuns with their distinctive dress or habits and celibate lifestyle stood out, and their numbers were still relatively small, making it easy to typecast them.

PC: What do the abolition movement and the anti-convent movement have in common? Your third chapter, which I found so intellectually engaging, traces a series of connections between Awful Disclosures and Uncle Tom's Cabin. Tell the blog what these two iconic books have in common and how you arrived at the conclusion this should be a chapter of the book.

CY: One of the Maria Monk “hooks” for me was that Awful Disclosures was the second best-selling book in the US before the Civil War. The first was Uncle Tom’s Cabin. I touted this talking point a lot before really thinking about the connections between the two works and their respective campaigns against convents and slavery. Convent critics referred to nuns as “white slaves” and described convents as “little fortifications” ruled by “licentious priests.” In the same way abolitionists envisioned the plantation as a barricade under profligate slave-owner/overseer control.  In pushing for immediate abolition, reformers turned to stories that would galvanize readers—the rape of female slaves, physical torture, prohibitions against slave marriages, and harrowing separation of slave mothers from their children. Although the allegations against convents could not be collaborated in the same was as those against slavery, anti-Catholics likewise detailed the alleged sexual exploitation and torture of nuns, marriages thwarted by a nun’s vows, and the deadly fate of babies born in convents. George Bourne, one of the first immediate abolitionists and also a ghost-writer of Awful Disclosures, used the same arguments against slavery as he did against convents, pointing to women’s sexual purity, marriage, and the family. Uncle Tom’s Cabin dramatized these domestic arguments against slavery in a way that captivated the nation. Eliza, the female protagonist and runaway slave, perilously escaped her bondage with baby in tow. Along the way, virtuous maternal women helped her. Unlike these women, Marie, the white slave mistress, degraded by her power, enjoyed torturing slaves and cared little for the affections of her own children. The greatest villain in the story was Simon Legree, the lecherous slave-driver. Parallel characters appeared in Awful Disclosures. The priests could easily stand in as Legree; Maria Monk, like Eliza, escaped her bondage to save the life of her child; the Mother Superiors mirrored Marie. The happily-ever after sequence, something Stowe helped invent, entailed marriage and family reunion in a safe, happy home. This same message underlined Awful Disclosures. I became convinced that this should be a chapter in my book as I explored these parallels and realized that these two reforms, one laudable one not, and two books, one remembered the other forgotten, had much more in common than we realize.

PC: Your research is important on many levels but it is particularly important to current moment over sexual abuse in the Catholic Church. What lessons does the antebellum hold for our own scandal-ridden times? Does an analysis of the print from the early-to-mid 19th century help us to read court documents, dossiers, exposes, and books about these topics today?

CY: The present day revelations about sexual abuse in the Catholic Church is heartbreaking and reprehensible. I sometimes feel as though I’m in an awkward position because I research unsubstantiated accusations of sexual crimes in the Catholic Church born out of bias, prejudice, and malice, while similar accusations of today can be corroborated. One thing that I think studying anti-Catholicism and particular anti-convent sentiment from the antebellum can teach us regarding our responses to the current, real scandals is that we should still be careful not to over-generalize. Not all priests are perpetrators of sexual abuse, even if some or even alarming numbers, are. Not all women religious or nuns are victims of sexual abuse or without agency, even if some have suffered under a male hierarchy. The anti-Catholic print culture from the antebellum era was full of blatant stereotypes, self-righteousness, and one-dimensional characters. I have not read much of the printed material on the current issues in the Catholic Church today other than op-eds, but I would advise readers to keep an eye out for propaganda rhetoric that generalizes all clerics, nuns, or the celibate lifestyle. I don’t think we should ignore the current scandals, but I think we should be careful to remember that we are dealing with human subjects and avoid the temptation to crack the joke about the pedophile priest or the poor nun. These jokes cloud reality and allow for a host of assumptions that go farther in separating people and hiding the truth than bringing us together to consider real, complex issues.

PC:  What is your next project?

CY: My next project in some ways is completely different from this one, but in other ways, it’s similar. I’m researching Mary Kay, the woman and the cosmetics empire. Mary Kay has been named the “greatest female entrepreneur in American history.” Hers was the first company owned by a woman to go public on the New York Stock Exchange in 1968. More than anyone else in the US, she had “helped to create more female millionaires.” I’m interested in learning more about her story and the influence of Mary Kay on the lives of so many women. Mary Kay started her company in 1963, the same year the women’s liberation movement kicked off with the publication of Betty Friedan’s The Feminine Mystique. Mary Kay offered women incredible earning potential and a chance to get out of the house, travel, and befriend other women. She applauded women at a time when they didn’t get much appreciation for their work, and she railed against the gender wage gap. And yet, she was no avowed feminist and thought women should “be women.” Her company motto was “God first, family second, career third.” I’m intrigued about where exactly Mary Kay fits into the feminist-conservative divide in American history. I’m also interested in learning more about the vast culture of women who made up a veritable army of “Mary Kay ladies.” In fact this culture of women is where my two projects might overlap a bit. In some ways, Mary Kay was like a founder of a female religious order. Those who signed up to be Mary Kay ladies looked up to her as an icon, finding inspiration in her Cinderella story and vision. They sang company songs and wore matching business suits. I also hope to place this story within the larger context of women in business and the history of beauty. I’ve got a good start on the project so far, and hope to learn more after I make a pilgrimage to Dallas this summer.