The New Journalism as Ethnography of Prayer?

On a Chinook helicopter, Michael Herr, a war correspondent for Esquire, encountered a “religious” marine. The grunt, who had etched a cross onto his helmet cover, read the bible during take-off. The meeting prompted Herr to dwell on the dearth of pious troops: “you didn’t meet many who were deeply religious,” he wrote, "even though you expected to, with so many kids from the South and Midwest, from farms and small rural towns” (154).  The quote took me aback. Herr’s classic memoir, Dispatches, contains a handful of penetrating analyses of lived religious experience.


Dispatches (1968) is a remarkable book.  As a young reporter Herr traveled to Vietnam to observe the troops and get to know them. Dispatches is his investigation of men in war, in both the exemplary and banal moments. His book became an exemplar of the so-called “New Journalism” – the 1960s effort to write a “non-fiction novel.” The non-fiction novel takes real persons and fits them into a narrative and makes them characters in a plot. They are real people whose persona has been crafted by the author based on copious field notes. The characters have much more depth than a reader finds in an article for a magazine or newspaper. Herr describes Vietnam in vivid prose and he brings character out of the men he meets, like the soldiers Mayhew and Day Tripper, the protagonists of the book’s second half.

I make two arguments in this blog post. First, Herr’s triumph in the genre of new journalism raises interesting questions about the intellectual history of religious ethnography. New Journalism normally does not enter into our genealogies of ethnography, but perhaps it should. Second, I want to make the case that Dispatches is a rich investigation of prayer. Prayer appears infrequently in this book but when it breaks into Herr’s analysis it does so in a nuanced and analytically deep fashion.

To be sure, Herr does see a world made secular through war. He does not, for example, attribute rituals much power at all.  No matter what ritual a particular soldier preferred, “carry your lucky piece,” “wear your magic jungle hat,” “kiss your thumb knuckle smooth as stones running underwater,” death still lurked. Death followed the guys who “stuck the ace of spades in their helmet,” “carried around five pound bibles from home,” or humped “crosses, St. Christophers, mezuzahs, locks of hair … [or] pictures of John Kennedy, Lyndon Johnson, Martin Luther King, Huey Newton, the Pope, Che Guevara, the Beatles, Jimi Hendrix” (56-57). Herr implies that because these rituals lacked power over the ends of life, they seemed an empty form. War is cruel. 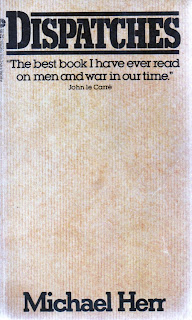 Herr casts material religion and ritual aside but prayer is a category of deep meaning for him. One of the most breathtaking moments in Dispatches occurs when soldiers enter into “deep prayer” in the presence of “a company’s worth of jump booths standing empty in the dust taking benediction” (23). This is how the 173rd Airborne mourned their dead before Army processed the bodies and belongings through the official bureaucratic channels. Prayer consecrates the dead before the state puts the bodies through its establishment machinery. Here too Herr observes an inability of the sacred to define the process of mourning: Herr genuflects towards the boots alongside the soldiers, some who prayed, and others who grumbled about the mercilessness of war. Some soldiers needed to talk to God; others thought war made God impossible.

Dispatches captures the weaponization of prayer and its limits. Everyone prayed before battles, asking the Gods to support their cause. “Prayers in the Delta, prayers in the highlands, prayers in the Marine bunkers of the ‘frontier’ facing the DMZ, and for every prayer there was a counter-prayer,” Herr observes (45). The context of war, and the instability and unpredictability it fostered, prompted many – soldier and civilian – to bend knees. Herr distills the religious experiences around him into powerful bursts of words but seems all too eager to let the contradictions of religion override any unvarnished analysis. God helped men kill their enemies but God also watched “the blood run out of ten generations” (44). Contradiction and failure of religion are key themes of religion in Dispatches. Yet, the observations of prayer are also profoundly moving:

"In wood-paneled, air-conditioned chapels in Saigon, MACV padres would fire one up to sweet Jesus, blessing ammo dumps and 105’s and officer’s clubs. The best-armed patrols in history went out after services to feed smoke to people whose priests could let themselves burn down to consecrated ash on street corners. Deep in the alleys you could hear small Buddhist chimes ringing for peace, hoa bien; see groups of AVRN with their families waiting for transport huddles around a burning prayer strip" (45).

Herr tunes readers into a military landscape saturated with religiosity. Prayer circulated throughout cities and criss-crossed the battlefields. There was an economy of prayer in wartime Vietnam. Herr’s writing brings all of this to life. Phrases like “fire one up” and “feed smoke” sparkle throughout Dispatches. The prose is remarkable, making Herr's book one of the best efforts of the New Journalism.

Herr also distinguishes between two modes of prayer: official and spontaneous. The military, as numerous historians have shown, never shied away from promoting religiosity among the troops. Hundreds of chaplains followed the troops wherever they went. Herr got his hands on some of the official religious literature. The standard issue government soldier prayer came “printed on a plastic-coated card by the Defense Department” (58). The laminated prayer card had the state’s imprimatur. The official prayer, we should note, depended upon human language to be uttered. But prayer was also spontaneous because no soldier likely pulled out their official card in the heat of battle. Another mode of prayer, Herr writes, “got translated out of language” into “chaos – screams, begging, promises, threats, sobs, repetitions of holy names until their throats were cracked and dry” (58).  Herr, taking a step beyond the official/spontaneous distinction, marks out a distinction between prayer in language and prayer through chaos. Prayer can be sounds uttered but also soldiers biting “collar points and rifle strips and even their dog-tag chains” (58).  Herr offers us a multifaceted and even excessive notion of prayer throughout Dispatches. In a sense, the book undermines its own secular vision by noting the dynamics of religion.

Herr did not see himself as an ethnographer of religion or even an anthropologist of religion. He was a journalist taking notes and rendering experience into words. Yet, I want to suggest that works of The New Journalism like Dispatches (and Tom Wolfe’s masterpiece The Electric Kool-Aid Acid Test) are important early efforts to seek out lived religion. Herr’s analysis of the secularity of military life and the seemingly devastating contradictions of religion do not overwhelm his power of observation. This is a book that takes us to the actual experience of prayer.