Over drinks at the 2018 American Catholic Historical Association, a cabal of American religious historians imagined an alternative conference model. Kathleen Holscher, current president of the ACHA, brought the group together through texts and facebook messages.  Several ideas were floated (libations were being consumed), and many quickly discarded as outlandish. Then one of the revolutionaries, John Seitz of Fordham University, proposed a novel approach: what about taking each letter of the ACHA and offering a critical take on that specific word? The words of our organization’s acronym could provide a launching pad for a range of fresh interpretive spins on nationhood, Catholicism the discipline of history, and the actual organization. The panels have been self-consciously created as “Critical” investigations of each term: American. Catholic. Historical. Association.

The plan is a reality. The conference will feature four panels, each one dedicated to a “critical term”:

The location and the participants are listed below.

One thing was abundantly clear to the junta: this exercise should feature scholars who do not normally attend the ACHA annual meeting. Each chair and commentator set forth on an emailing campaign and recruited scholars from other fields who call other associations their homes. What better way to think critically about the normative assumptions and crypto-theologies lurking behind these words than to bring in some friends from out of town?  The effort, as is obvious from the slate of presenters, was highly successful. As you can see below, the 2019 ACHA will have all sorts of new faces and scholars from a wide range of institutions.

What will the presenters discuss? The plan is amazingly suggestive and beholden to nothing: the presenters are only loyal to a term (American, catholic, historical or association) and can take their talk in whatever direction they deem most exciting, helpful, or critical. We can imagine a critical analysis of a term (each term is burdened with a long history) proceeding in multiple different ways. Why call it the American Catholic Historical Association when our object of study is so relentlessly global and transnational? What does it mean to claim that a church is Catholic? By Catholic, do we mean Church? What do we lose when we take a purely historical approach?

Some will offer Foucauldian genealogies of a term. Other papers, like my own, will question our motivations for having a society dedicated to the study of Catholics. Provocations will certainly be offered: Why do Catholics
matter to American History or any other historiography? What is really happening in this Association? What do you mean by Catholic? Can Catholic Historians be Good Americans?

I hope you will join us for these extremely interesting sessions! 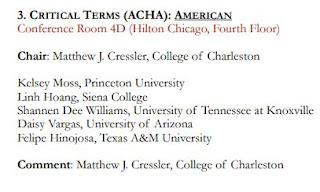 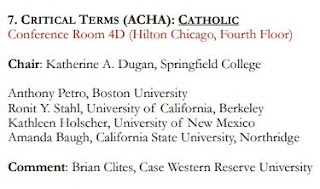 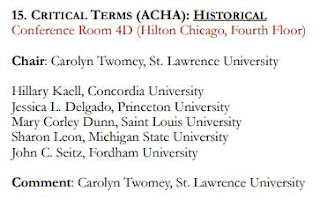 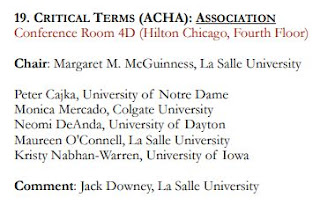