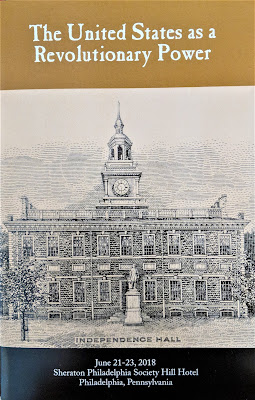 Although this year's annual Society for Historians of American Foreign Relations meeting featured fewer panels and roundtables addressing American religion than previous conferences, there were still a number of noteworthy presentations.

Particularly exciting was Panel 64: Terms of Endearment: U.S. Sympathies towards Israel, 1960s-1980s, which Melani McAlister chaired. This panel included two papers that shed light on American religious leaders and the dynamics of the U.S. relationship with Israel: “Rabbi Balfour Brickner and the Interreligious Challenge to American Zionism, 1967-1982," by  Doug Rossinow and "Israel, Lebanon, and the Conservative Politics of Religious Persecution, 1978-1983," by Daniel Hummel. Rossinow's paper used Rabbi Balfour Brickner's activism and writing as a means for exploring how liberal Jewish Zionism grew more contested in the shadow of the Six Day War in 1967 and the Vietnam War. Rossinow suggested that Rabbi Brickner and other Jewish liberals faced a seeming paradox of being dovish on Vietnam yet hawkish on Israel, and that the hawkishness on Israel in time created friction with their erstwhile liberal Christian allies in anti-war organizations such as Clergy and Laity Concern about Vietnam (CALCAV). While this in time pushed some supporters of Israel into closer alignment with the political right, Rossinow revealed that Brickner came to define himself as a "dove Zionist" and an advocate for a two-state solution, charting a distinctive path for himself as a liberal. Hummel pushed the story of U.S.-Israeli relations into the early 1980s, exploring the increasing commitment to Christian Zionism by the religious right after the 1982 Lebanon War. Moving beyond more well-known analyses of eschatology, Hummel argued that Israel garnered support from the Christian right for its invasion of Lebanon by claiming that it was defending religious liberty by seeking to protect a persecuted religious minority (in this case Lebanese Christians/the Maronite Phalange party). Jerry Falwell and other Christian Right stalwarts seized on this defense of international religious liberty, and, as Hummel argued, also used their growing connection with Israel as a means for countering domestic allegations that they were anti-semitic. This panel was fascinating and I look forward to seeing how these conference papers evolve into published work.

I had the pleasure of presenting a paper on Panel 84: Missionary Politics and U.S. Foreign Policy, which Carol Chin chaired. Emily Conroy-Krutz started off the panel with a tremendous paper entitled, "'The Political Values of the American Missionary'?: Making Sense of the Missionary-Consul Connection in the 19th Century," which considered the fascinating life and work of Divie Bethune McCartee, a medical missionary and diplomat to China and Japan in the mid-19th century. Conroy-Krutz used his dual missionary-diplomat identity to discuss the significance of extraterritoriality in this period as well as to consider ideas of empire and U.S. relations in this era. Eva Payne followed this with a paper on American missionary accounts of the brutal sexual violence that Korean women and girls (especially Korean Christians) faced from the Japanese during the Korean Independence Movement in 1919.  “Our Girls Are in the Hands of Savages”: American Missionaries and the Korean Independence Movement," demonstrated the efforts of American missionaries to export their notions of morality and sexual purity abroad, as well as the links they drew between modesty/sexual purity and the capacity for self governance. These views contributed to the critiques these missionaries leveled against the State Department for its stated policy of neutrality in its dealings with Korea. I finished out the panel with a paper entitled "The 'Voice of Salvation': Missionary Radio as Spiritual Warfare behind the Iron and Bamboo Curtains," which examined how evangelicals used communications technology to support their persecuted brethren in the communist world and build a sense of global evangelical community.

There were several other papers and posters of note on the SHAFR program, which I unfortunately did not see in person but nevertheless would like to highlight. These include:

Poster Session #1
"American Educators, Missionaries, and Cultural Pluralism in the Middle East after World War I," by Francis Bonenfant-Juwong, University of Notre Dame

As always, the annual SHAFR conference was a wonderful and intellectually-stimulating weekend. The conference and society is very welcoming to scholars who study culture (including but not limited to religion) and I hope to see more religion on the program next year. I encourage RiAH readers whose work intersects with empire, foreign relations, or international politics broadly conceived to consider putting in a proposal for SHAFR 2019!