Four of us—Erin Bartram (University of Hartford), William Black (Rice University), Michel Sun Lee (University of Texas at Austin), and Moxy Moczygemba (University of Florida)—are excited to present part two of the 2018 book preview list! This post covers releases from May through July 2018.

Books are grouped by publication month. As always, feel free to leave a comment if you believe a book has been mistakenly overlooked by our editorial team. 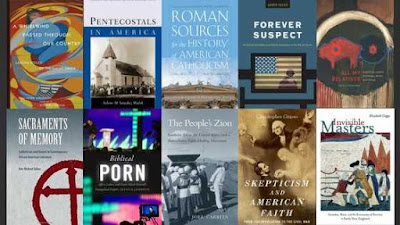 
Devery S. Anderson, ed. Salt Lake School of the Prophets, 1867–1883 (Signature Books)
From the publisher: “Ministerial training was an early goal of Mormonism. The priesthood-led institution called the School of the Prophets, established in Kirtland, Ohio, in 1833, was basically a divinity school for prospective missionaries. . . . Brigham Young re-established the school in the Salt Lake Valley in 1867; his successor, John Taylor, resuscitated it for a while in 1883. Young’s emphasis was theology, first as an appendage to Deseret University, and then as a separate institution. Presented here for the first time are all available minutes for the Utah period.”

Catherine R. Osborne, American Catholics and the Church of Tomorrow: Building Churches for the Future, 1925-1975 (University of Chicago Press)
Paula M. Kane: “American Catholics and the Church of Tomorrow shows how by the mid-twentieth century, certain aspects of modernity began to affect the tradition-bound Catholic Church. The impact was seen in the Church’s changing outlook on church design and furnishing, on social issues such as psychedelic drug experimentation and civil rights activism, and on the sacred liturgy itself. Osborne’s book is accomplished, well-written, and thoroughly researched.”


Rani-Henrik Andersson, ed. A Whirlwind Passed through Our Country: Lakota Voices of the Ghost Dance (University of Oklahoma Press)
Jeffrey Ostler: “Rani-Henrik Andersson has assembled by far the most comprehensive collection of primary sources on the Lakota Ghost Dance, including many he has skillfully translated from Lakota. His introduction and commentary provide excellent guidance into the diversity of Lakota voices that speak about this vitally important movement.”

Melissa Daggett, Spiritualism in Nineteenth-Century New Orleans: The Life and Times of Henry Louis Rey (University Press of Mississippi)
Caryn Cossé Bell: “Melissa Daggett’s unrivaled grasp of a voluminous collection of French-language spiritualist texts makes Spiritualism in Nineteenth-Century New Orleans a must-read for anyone interested in the city’s multifaceted religious culture with its links to the North, the Caribbean, and Europe.”

Leilah Danielson, Marian Mollin, and Doug Rossinow, eds. The Religious Left in Modern America: Doorkeepers of a Radical Faith (Palgrave Macmillan)
Darren Dochuk: “Cutting across faith traditions and the entire twentieth century, glimpsing radical social gospels in local and global contexts, and political circumstances of sweeping significance, The Religious Left in Modern America is an important and timely reminder that a dynamic religious left has always operated at the heart of American life.”

Zach Mills, The Last Blues Preacher: Reverend Clay Evans, Black Lives, and the Faith that Woke the Nation (Fortress)
Victor Anderson: “Mills’s biography of the Reverend Clay Evans brings into cultural focus the sound, passion, and commitments of one of the most recognized voices in the history of black preaching and gospel musicology of the twentieth century. Rev. Evans reminded many of us growing up in Chicago every Sunday evening that ‘there is room at the cross for you.’”

Erin Michael Salius, Sacraments of Memory: Catholicism and Slavery in Contemporary African American Literature (University Press of Florida)
Katherine Clay Bassard: “Brilliant and insightful. Fills a gap in the study of African American literature and religion, which has traditionally assumed a Protestant theological and cultural landscape as the ground for discussions of religion and spirituality among the enslaved. Adds to our knowledge of how religious tropes, archetypes, and theological claims inform readings of African American literary texts.”

Michele Lise Tarter and Catie Gill, eds. New Critical Studies on Early Quaker Women, 1650–1800 (Oxford University Press)
From the publisher: “. . . takes a fresh look at archival and printed sources from England and America, elucidating why women were instrumental to the Quaker movement from its inception to its establishment as a transatlantic religious body. This authoritative volume, the first collection to focus entirely on the contributions of women, is a landmark study of their distinctive religious and gendered identities. The chapters connect three richly woven threads of Quaker women's lives—Revolutions, Disruptions and Networks—by tying gendered experience to ruptures in religion across this radical, volatile period of history.”

Steven M. Avella, The Catholic Church in Southwest Iowa: A History of the Diocese of Des Moines (Liturgical Press)
Timothy Walch: “Fr. Steven Avella has produced an exceptional history of Catholicism in the American heartland. Based on rigorous scholarly research and written in clear compelling prose, Fr. Avella tells the story of the Diocese of Des Moines during the ten tumultuous decades of the twentieth century. This book will be of value not only to academic historians, but also to general readers interested in the evolution of the Catholic Church in a diverse American diocese composed of small cities and big towns bound together by hundreds of bustling farms.”

Grant Brodrecht, Our Country: Northern Evangelicals and the Union during the Civil War Era (Fordham University Press)
Mark Noll: “Grant Brodrecht’s illuminating study shows how highly northern evangelical Protestants exalted their idea of the national Union before, during, and after the Civil War. With deep research and absolute mastery of standard historical scholarship, Our Country explains why this evangelical commitment to the Union as a providential, Christian nation exerted such influence during the war. Even more impressive is Brodrecht’s account of how this evangelical vision of the Christian nation undercut the push for African American equality and hastened the end of Reconstruction. It is an unusually impressive book.”

Harold K. Bush and Brian Yothers, eds., Above the American Renaissance (University of Massachusetts Press)
Elizabeth Fenton: “This collection is the first to assess nineteenth-century American literature in this way, and it will be of tremendous use to both scholars interested in U.S. religious traditions, Christianity specifically, and those who study the writers examined here. Above the American Renaissance is also a timely and important reengagement with David Reynolds’s work, a text that has laid the groundwork for nearly three decades of scholarship.”

Joel Cabrita, The People’s Zion: Southern Africa, the United States, and a Transatlantic Healing Movement (Harvard University Press)
Derek Peterson: “Drawing on archives in South Africa, Swaziland, Sweden, and Illinois, this remarkable book tells an altogether unlikely story. It features an Australian preacher who, in the late nineteenth century, established a Christian utopia in tiny Zion, Illinois, a town which was to be the launching pad for one of southern Africa’s leading Christian movements. The People’s Zion brings to light a whole network of textual, intellectual, and theological exchange that drew American midwesterners into close dialogue with co-travelers in southern Africa. In so doing, Cabrita places African Christians at the center of the history of global Christianity.”

Marc Dollinger, Black Power, Jewish Politics: Reinventing the Alliance in the 1960s (University Press of New England/Brandeis University)
Shaul Magid: “Dollinger’s illuminating book illustrates that many American Jewish leaders were not only sympathetic to Black Power but were supportive of it. Dollinger shows that the American Jewish turn toward issues of Jewish continuity owes a great debt to the Black Power movement and that Jewish leaders understood that early on. This book will significantly change how we view the American Jewish 1960s and their aftermath.”

Christopher Grasso, Skepticism and Faith: From the Revolution to the Civil War (Oxford University Press)
Mark Noll: “Christopher Grasso has pursued what other historians have considered by-ways in order to show that deism, skepticism, and religious doubt were anything but marginal in the formative decades of the United States.”

Daniel Judson, Pennies for Heaven: The History of American Synagogues and Money (Brandeis University Press/University Press of New England)
Beth Wenger: “Judson demonstrates not only the mechanisms used to fund synagogues but also what they reveal about American Jewish culture. A fascinating exploration of the complex junctures between American Judaism and the market.”

Anna M. Nogar, Quill and Cross in the Borderlands: Sor María de Ágreda and the Lady in Blue, 1628 to the Present (University of Notre Dame Press)
John Morán González: “Thanks to Nogar’s clear style and ground-breaking research, this book provides a fascinating account of how one nun’s writings influenced the course of the Spanish colonial project even as she became a legend in the Americas despite never crossing the Atlantic.”

Seth Perry, Bible Culture and Authority in the Early United States (Princeton University Press)
David Holland: “Early national Americans, [Perry] argues, used the Bible as an instrument of self-fashioning and for the construction of intersubjective relationships during the unstable period that followed the American Revolution. I will think about the early republic's processes of scripturalization differently and more profitably because of Perry's book.”

Arlene M. Sánchez Walsh, Pentecostals in America (Columbia University Press)
Paul Harvey: “. . . explores, describes, and interprets the almost infinitely varied and complex world of American Pentecostalism. The result is an impressionist painting of Pentecostalism in America, beautifully colored and bursting with vivid description and stimulating interpretations, both useful and delightfully interesting to read.”

Saher Selod, Forever Suspect: Racialized Surveillance of Muslim Americans in the War on Terror (Rutgers University Press)
Moustafa Bayoumi: “Scholars of Muslim Americans have long needed a rigorous study of how Muslims get racialized during the War on Terror. Saher Selod has not only provided us with the answers we were seeking but importantly shows how this racialization is both profoundly gendered and deeply institutionalized into today’s surveillance state.”

Elisabeth Ceppi, Invisible Masters: Gender, Race, and the Economy of Service in Early New England (University Press of New England)
Christopher Tomlins: “In this wise and subtle exploration of the culture of service in Puritan New England, Ceppi teaches us both the true depth of meaning in the familiar expression ‘work ethic’ and the centrality of mastering others to mastering oneself.”

Edwin S. Gustad, Heath W. Carter, and Mark A. Noll (eds), A Documentary History of Religion in America, 4th edition (Eerdmans Press)
Kate Bowler: “This updated collection of primary documents has been expertly pulled into a single volume to give a new generation of students access to a wide range of prominent religious voices. Beautifully narrated and carefully curated, these readings are thoughtfully chosen to showcase fundamental debates about the character of American religion.”

Forrester A. “Woody” Lee and James S. Pringle, A Noble and Independent Course: The LIfe of Reverend Edward Mitchell (University Press of New England)
From the publisher: “In 1828 Edward Mitchell was the first student of African descent to graduate from Dartmouth College, more than thirty-five years before any other Ivy League school admitted a black student. This book tells Mitchell’s life story with the help of a recently rediscovered trove of his college essays, notes on his religious conversion, and hand-copied versions of his sermons.”

David C. Posthumus, All My Relatives: Exploring Lakota Ontology, Belief, and Ritual (University of Nebraska Press)
Philippe Descola: “In this superb ethnography of North American animism, David Posthumus paints a vivid and poetic picture of what it meant for the nineteenth-century Lakota Sioux to live in a world beyond the human that they shared with scores of animal persons and spirits. A remarkable achievement.”

Pretty sure I didn't see Catherine Osborne's new book on this or the previous (January-April) post: American Catholics and the Church of Tomorrow: Building Churches for the Future, 1925-1975 (University of Chicago Press, April/May 2018).