Interview with Adam Laats on Fundamentalist U

As you might imagine given my scholarly interests, I love to see good work come out on the history of religion in American higher education. That's why I was delighted to interview Adam Laats on his new book Fundamentalist U: Keeping the Faith in American Higher Education (New York: Oxford University Press, 2018). Adam is a scholar I highly admire not only for the depth of his research but also for his commitment to rigorous fairness to historical characters from across the ideological spectrum. So without further ado, here is Adam weighing in on everything from the nature of evangelicalism to why religious historians should care about the history of education to what to do about the culture wars: 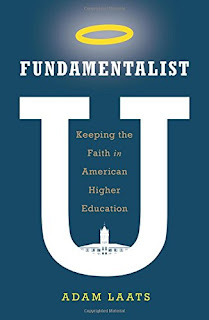 AT: What led you to write Fundamentalist U?

AL: The most interesting questions for me are pretty basic: What are schools for? What counts as “good” when it comes to education? From that perspective, there is nothing more fascinating than the network of evangelical colleges, universities, institutes, and seminaries. In the twentieth century, they represented the most significant dissenting type of school in the United States.

AT: Why is studying the history of education important for historians of religion?

AL: When it comes to religion (and politics, too, but that’s another story), education is where the rubber hits the road. There is no better way to understand a religious group as it truly is than to examine the ways it tries to pass itself on to every new generation. Beyond creeds and catechisms, curriculum represents the unvarnished truth of what a religious group considers absolutely vital for children to know.

AT: Your book is entitled Fundamentalist U, but you cover colleges and universities you label “fundamentalist” and those you label “evangelical.” How would you define the difference?

AL: By the middle of the twentieth century, a group of fundamentalist Protestants hoped to reform their movement, to introduce what Carl Henry called in 1947 “progressive Fundamentalism with a social message.” To my mind, the neo-evangelical reform, which eventually became known simply as “evangelical,” is still best described in Henry’s terms; the theology of fundamentalism is still there, but some of the non-theological conservative cultural ideas are scraped away, the inward-looking exclusivity is abandoned in favor of engagement with the outside world.

When I began this research, I was expecting to find a hard, clean institutional break between “evangelical” and “fundamentalist” institutions in the middle of the twentieth century, the kind George Marsden described at Fuller Seminary. In fact, even at schools most firmly associated with either the “fundamentalist” side of the evangelical family or the “evangelical” side, I found lingering connections and associations to the other side. As with all family feuds, the division between “fundamentalists” and “evangelicals” was never as clear as some historians and partisans would like it to be. Fundamentalists never gave up on claiming higher academic and scientific standards, though they often despaired of ever achieving the mainstream recognition of their academic superiority they thought they deserved. Evangelicals never abdicated their fundamentalist religious purity, though they abandoned their insistence that only fundamentalists could be trusted intellectually or morally.

AT: What did you find to be the relationship between theological and political conservatism at these institutions?

AL: This is something evangelical intellectuals don’t like to hear, but I’ll say it: Many times, political conservatism—or, more precisely, a vague but powerful cultural traditionalism that included political conservatism—became a more influential popular measure of “true” fundamentalism than did theological conservatism. Colleges and universities were subjected to endless, ruthless scrutiny by the broad evangelical public. This scrutiny sometimes included theological notions, but more commonly dealt with issues such as student behavior, faculty affiliations, and political or social conventions. Any whisper that a school had slipped from full-throated dedication to key traditional ideas or norms could cause panic in that school’s administrators, alumni, and trustees.

My favorite example of this ever-present tension came in 1936 when President J. Oliver Buswell of Wheaton College confronted J. Gresham Machen about his new Westminster Seminary. Professor Machen had recently left Princeton Seminary to open his new school, and Buswell was concerned about rumors Buswell had heard. Was it true, Buswell demanded, that Westminster students were allowed to drink alcohol? Machen confirmed it. There was no theological reason to prohibit alcohol, Machen insisted. In his considered opinion, teetotalism was not a Christian imperative, but a bland bit of Main Street prudism.

AL: Most significantly, I’d say, conservative-evangelical colleges and universities (both those that called themselves “evangelical” and those that called themselves “fundamentalist”) influenced mainstream American higher education by offering an intellectual and institutional haven for an alternative epistemology, one that didn’t immediately dismiss the influence of the supernatural.  How did that impact mainstream higher education? In at least two significant ways. First, students from evangelical colleges often also attended mainstream schools, either as transfer students or graduate students. The training those students received in their conservative-evangelical colleges—intellectual training, but perhaps more importantly a sense of themselves as dissenting scholars—must have had an enormous influence on their work in mainstream institutions.

AT: Would you say the record of twentieth-century fundamentalist and evangelical institutions on race, class, and gender inclusivity is better or worse than the record of mainstream higher education? Why?

AL: In the most obvious senses, in my opinion, the record of most evangelical institutions of higher ed has been much worse when it comes to questions of racial and gender inclusivity. Most obviously, a few fundamentalist colleges such as Bob Jones University clung desperately to racial segregation and insisted on traditional gender hierarchies. If we only get to tell one story from the history of evangelical higher education, that is it. But if we can take time to dig beyond the obvious, we see a more complicated story. At many evangelical schools, for instance, activists from a variety of racial backgrounds used the long history of evangelical anti-racism to help move their institutions in a more positive direction racially. After all, American evangelicals had a long tradition of anti-racist activism and many institutional activists were able to draw on that history to call for reforms. When it comes to questions of sexual identity and gender identity, though, twentieth-century evangelical schools—ALL of them—have a much worse record of inclusion, from my perspective (though that was not true in the nineteenth century).

The question gets more complicated when it comes to issues of class. For theological reasons, many evangelical institutions actively reached out to non-elite populations, often explicitly and repeatedly rejecting elitist academic standards in favor of spreading the Gospel message as widely as possible. But across the course of the twentieth century (at four-year liberal arts colleges more than schools from the Bible-institute tradition, though all evangelical colleges participated in this trend to some extent) evangelical institutions moved toward mainstream ideas about academic elitism. Part of that process was due to nuts-and-bolts questions of accreditation. Part was due to a more nebulous pursuit of academic prestige. For whatever reasons, many evangelical institutions in the twentieth century became less focused on reaching all people and mimicked the elite academic standards of mainstream and mainline colleges.

AL: The challenge, as I see it, is to abdicate positions of privilege when none of us is willing to even admit we occupy those positions, and when we certainly don’t trust our culture-war foes to do the same. From the conservative side, many of the white conservative evangelicals in the institutions I studied wouldn’t like to admit it, but they really do yearn for an imagined past and a fantasy future in which America was somehow truly Christian and can somehow be “made great again.” There is a palpable sense among white conservative evangelicals of being kicked out unfairly of positions of power and privilege. On the other side, secular progressives like me can suffer from a similarly unacknowledged sense of privilege in academic and intellectual life. Secular academics often delegitimize and demonize any sort of thinking that does not proceed from secular, materialist grounds.

No one will like this prescription, but I think conservative evangelicals—of every racial background—need to get over their implicit assumption that they should be able to dictate social policy to match their religious beliefs. At the same time, progressive secular folks need to wrestle more profoundly and more humbly with the fact that people of good will have honest and important differences when it comes to basic assumptions about the ways we know things and the ways we define good and evil.

AT: What do you see as the most significant contribution of your research to our historical understanding of fundamentalism and evangelicalism? AKA, if we could make one change to how we teach these topics based on reading Fundamentalist U, what would you want it to be?