"Exploring the Global History of American Evangelicalism": A Special Issue of the Journal of American Studies 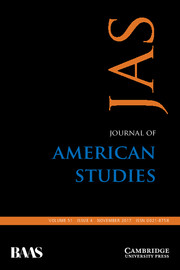 The Journal of American Studies recently ran a special issue entitled "Exploring the Global History of American Evangelicalism." According to organizers Kendrick Oliver, Uta A. Balbier, Hans Krabbendam, and Axel R. Schäfer, the collected articles aim to "explore the changes over time in American evangelical conceptions of the 'global," "document the diversity of means used by American evangelicals in their efforts to make the world one in Christ," examine "the role played by the politics of affection in relations between American evangelicals and the outside world," and "identif[y] the overseas work of US evangelicals as making an integral contribution to the expansion and perpetuation of their nation’s influence as exercised across a global horizon through the long twentieth century" (1038-41). With essays by Heather Curtis, Axel R. Schäfer, Hans Krabbendam, David R. Swartz, Timothy Stoneman, Uta A. Balbier, Melani McAlister, Kendrick Oliver, and John Maiden, the issue does not disappoint. These articles will be of great value for those interested in the history of American evangelical internationalism.