End of the Semester Reflections

Back in September, I had reported I was kicking off my "American Religious History" class this semester with some changes. Now, with the semester almost done, I figured a look back would be appropriate.

Most importantly, I had promised some report on teaching Rick Kennedy's biography of Cotton Mather. I can attest that it taught well, and I thought it communicated a lot of complex ideas about 17th- and early 18th century Puritanism really gracefully. Several of the hooks in the book worked marvelously. My students were most impressed that Mather had shown up as part of the Marvel Comic Universe. They were also impressed that Mather had diagnosed the Babylonian King Nebuchadnezzar as a werewolf. In perhaps the best tribute, one of the students created a historical card game in which Cotton Mather featured prominently.

More generally, I was struck by several other features going through the class this semester.

First, the class really leant itself to making connections of the past with the present. This semester such concerns felt perhaps a bit more urgent, and the study paid off. This was helped by several students who kept bringing us back--appropriately--to how the study of the past could inform thinking about today. I hope the class gained some insights, some context, and some language to make sense of 2017. Such understanding is in short supply all around.

Second, in thinking about how "past" the past can be, I was struck by the shift in the feel of the course and of American culture once we hit the mid-1960s. This is no surprise to recent American historians who chronicle the later 1960s, but the shift was a bit jarring in the class. There were clear breaks from the 1950s and early 1960s to the cultural and religious upheavals of the later 1960s and 1970s. We recently illustrated this with the Jesus People movement and how it reoriented Protestant church life and worship. Although the clothes styles have (fortunately) moved on since that time, the larger issues resonated with the class. 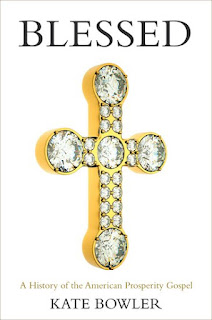 Third, I was impressed by the on-going tensions in American religious life mapped out between poles of the individual, his or her religious community, and the broader American society. I found myself repeatedly underlining how this issue reappeared and how it shaped religious experience. This theme, again, felt more pointed this year than in years past. Still, I hope it proved useful, not only for understanding past American religious expressions, but for understanding the tensions of the current moment.

Finally, I can report that we're getting ready for a foray into Kate Bowler's history of the Prosperity Gospel Blessed. I'm interested to see how the class will connect it to earlier topics we've studied, to see what comparisons they might draw. I'm very curious to see if any parts of her description of the movement resonate with my students and what they make of the world she describes. And, if all else fails, I'll rave about the network analysis she provided to describe connections in the Prosperity world.

All in all, this proved to be a great class that I'll appreciate for a long time to come...or at least I will, after I finish the semester's grading!

For readers--how would you reflect on your semester's experiences? What worked well? What didn't?
Email Post
Labels: Cotton Mather individualism prosperity gospel religion and community teaching