Democracy, Higher Education, and the Problem of the Common Good

A month ago I attended two national conferences on back-to-back weekends: the Society for U.S. Intellectual History (USIH) met October 26-29 in Dallas, TX and the History of Education Society (HES) met November 2-5 in Little Rock, AR. A week and a half of intensive immersion in the current scholarship of two overlapping fields made some common themes jump out. (And also produced fascinating insights into the variable quality of Marriott hotels. But I digress.)

Specifically, I was struck by historians' interest in two topics: the concept of the common good and the problem of how values are, or are not, transmitted to the next generation. I suspect these themes jumped out at me in part because they seem so salient in the current widespread breakdown of civil dialogue. Both of these lenses prove helpful for producing a clearer understanding of U.S. history, especially U.S. religious history—and for seeing how best to frame that history for our students today.

The question of the common good was raised most forcefully in a pair of book panels, one from each 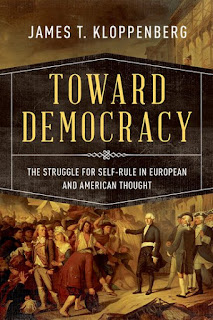 conference. USIH dedicated a plenary session to James Kloppenberg’s monumental work Toward Democracy: The Struggle for Self-Rule in European and American Thought (Oxford, 2016). A fair amount of the panelist and audience questions revolved around the role of religious beliefs, past and present, in forming and sustaining democracy. In answer to one of these questions, Kloppenberg articulated his conviction that some conception of the common good is necessary to ground democracy; otherwise politics becomes a zero-sum game. He asserted that historically democracy in the North Atlantic world grew in large part from Jewish and Christian roots—but that most religious and moral systems advocate some version of the golden rule that provides democracy’s necessary ethic of reciprocity. Therefore, democracy can certainly thrive in a climate of religious pluralism, but he fears it might not survive a devolution of belief in our responsibility as individual citizens to advance the common good. (Though Kloppenberg noted that he is by temperament a cautious optimist about our nation’s ability to rally around this ideal more robustly in the future.) 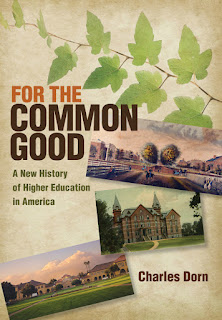 —and how we can do so again today. A partial answer comes from the book panel hosted by HES the next week on Charles Dorn’s For the Common Good: A New History of Higher Education in America (Cornell, 2017). Dorn’s book examines the different purposes higher education has served throughout American history—but notes that inculcating civic-mindedness has been present throughout. Instilling in students concern for the public welfare has, however, often been eclipsed by competing purposes. Those he details are the ideals of practicality, commercialism, and affluence. In other words, higher education has frequently been largely valued as an avenue to some sort of worldly success—which makes sense, considering how expensive it can be in terms of both money and time. Nevertheless, the existence of a through line of commitment to the common good among higher educational institutions throughout American history provides a rich heritage for contemporary colleges and universities to draw on.

Dorn also served as one of the commentators for the HES panel on my book, A New Moral Vision: Gender, Religion, and the Changing Purposes of American Higher Education, 1837-1917 (Cornell, 2016). He rightly noted that I too perceive the question of the nature of the public welfare to have loomed large in the educational debates that underlay our current college and university landscape. He put the question to me of whether the common good was solely in the eye of the beholder during the fractious discussions about the respective roles of gender, religion, and class in higher education that I analyze—or whether there was some criteria that educational founders, leaders, administrators, and boosters could have used to better adjudicate competing claims.

In many ways this is THE question I believe we have to answer as educators today. I responded that for past educators it seems to have been relatively easy to agree that colleges and universities should serve the public good, less easy to agree on the exact nature of that good, and harder still to agree on how to achieve it. Specifically, I think it is fair to say that both past and present Americans have agreed on many common goods plural, but that it has been much harder to agree on their ranking, and hence on which policies, both educational and political, best serve the nation. Additionally, my findings led me to conclude that it is nearly impossible for any one type of institution to do equally well by all types of students. The institutional pluralism of modern American higher education thus indeed seems best for a pluralistic nation. Yet if all these institutions seek to orient their students toward a common good—even if they do not agree on its exact nature—graduates will be primed for the process of democratic discussion.

But how can we know if students have internalized the moral vision their institutions have cast? I care about this question both as a historian and as an educator. I venture an answer in my book with respect to the institutional histories discussed there, but I also note that the question is notoriously difficult. I was therefore delighted to hear scholars at both conferences wrestling with the question of transmitting values. This theme was rarely the topic of an entire panel, but frequently appeared within individual papers. Collectively these papers indicate that attempts to transmit values to the next generation have often been mediated by educational institutions, religious institutions, or both. They have likewise been bound up in the tension between serving a particular religious community and serving the wider community:

Pete Cajka noted how the nineteenth-century U.S. Catholic school system sought both to preserve the faith and to form citizens. Benjamin Park noted how both Catholics and Mormons of that era shared a concern to stabilize American democracy by grounding Christian values in a religious hierarchy that could constitute a court of final appeal throughout time. I highlighted in my USIH presentation considerable concern within early twentieth-century mainline churches for how to retain the involvement of a new generation of college-educated women who were finding more opportunities for their talents outside the church. John Compton examined how J. Howard Pew’s father tightly controlled his education to inculcate in him a more conservative view of the relationship between Christianity and economics than characterized the bulk of his fellow Presbyterians. Daniel Williams noted how mid-twentieth century mainline apologists sought to defend Christianity not primarily for its own sake, but rather because they believed its values sustained the democratic political order.  Mario Rewers determined that students of the pioneer American studies classes actually valued and internalized their intended lessons in critical thinking. Elesha Coffman described how Margaret Mead wrestled with the problem of revising the baptismal liturgy of the Episcopal Church: if it changed too much, it wouldn't pass on the essence of the faith to the next generation, but if it didn’t change enough, that new generation would refuse to receive it. Matthew Bowman discussed how Robert Bellah’s concern with cults—very successful at transmitting their values and beliefs—focused on their separatist lack of interest in the common good. And Milton Gaither detailed what factors have correlated with successfully transmitting religious beliefs to the next generation and analyzed why the contemporary homeschooling movement did not actually succeed in doing so at a higher rate than average.

So where does all this leave me in my dual roles of historian seeking to understand changing American religious and moral values and educator seeking to instill in my students a desire to pursue the common good? I would say these conferences have challenged me to think more carefully in my own scholarship about how generational continuities and changes occur within educational and religious communities. And they have encouraged me to frame my teaching even more clearly around the pursuit of a common good throughout American history.

Perhaps there is hope: I stole an end-of-semester exercise from my colleague Elesha Coffman and asked students to list (anonymously) one thing they’ll do differently as a result of the class. Student answers included: “After this class, it will be easier for me to understand/appreciate others’ opinions,” “I cannot allow assumptions, fear, or ignorance to cloud my perspective,” “Be careful when discussing certain topics and always do my research first,” and, finally, “What I will do differently is analyze presidential candidates from a more unbiased, neutral perspective rather than putting them exclusively in the box of their political party.”
Email Post
Labels: #HES2017 #USIH2017 Andrea's posts common good conference recap conferences democracy religion and higher education teaching U. S. Intellectual History USIH