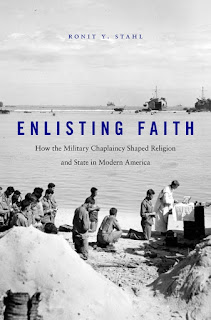 Ronit Y. Stahl, a historian of modern American religion, law, and politics, is currently a fellow in the Department of Medical Ethics & Health Policy at the Perelman School of Medicine at the University of Pennsylvania. She earned her Ph.D. in history from the University of Michigan and was a Postdoctoral Research Associate at the John C. Danforth Center on Religion and Politics at Washington University in St. Louis from 2014-2016.

The following is a brief conversation we had about her excellent new book, Enlisting Faith: How the Military Chaplaincy Shaped Religion and State in Modern America, which came out this month on Harvard University Press.


Q1. Can you tell our readers a little bit about your book? What is your core argument?

Enlisting Faith tells the story of how the federal government, through the military chaplaincy, struggled with, encouraged, and regulated religious pluralism over the twentieth century. It traces how the United States shifted from a chaplaincy that consisted of only mainline (white and African American) Protestants and Catholics to one that counts Jews, Mormons, Muslims, Christian Scientists, Buddhists, Seventh-day Adventists, Hindus, and evangelicals and, as of spring 2017, recognizes over 200 different faith groups and denominations among military personnel. This evolution was uneven—neither accidental nor fully envisioned. Blurred religious and racial categories confounded a military that, for decades, remained invested in racial segregation and race has always complicated government oversight of religion. Nevertheless, changes in the chaplaincy emerged through a combination of incremental top-down decisions made by government officials and grassroots agitation from civilians.

My core argument is that despite the constitutional separation of church and state, the government managed religion in the military and religion has played a significant role in state administration. As a result, it’s important to think about religion-state influence as bidirectional: the state has shaped religion as much as religion has shaped the state.

Enlisting Faith also makes two related arguments about periodization and the institution of the military. First, I argue that the idea of “tri-faith America” emerged in World War I, not World War II or the Cold War, and the military initially cultivated religious pluralism for pragmatic, rather than ideological, reasons. By World War II, when consensus around “tri-faith America” achieved public prominence, it had already begun fracturing. More religious groups wanted recognition, some who fell outside the Protestant-Catholic-Jewish fold, like Buddhists, and some who rejected the pluralist ethos, like Protestant fundamentalists. This divide has grown, and it continues to challenge the military and American society writ large.


Second, and relatedly, the military became a major arena of inter- and intra-religious politics over the twentieth century because it is as much a social and cultural institution as it is a martial one. The military can be conservative and hierarchical and, simultaneously, progressive and innovative. In recognizing the value of diversity and enabling civil rights, it often led the way (imperfectly, to be sure) and hastened change. I show how the military has served as a laboratory for state policy and a bellwether of change in American society—and this holds for race, gender, and sexuality as much as it does for religion.

Q2. Why did you decide to research and write this book about the military chaplaincy?

I’ve long been interested in the relationship between religion and the state, and I wanted to examine a space of extended interaction, rather than brief flashpoints of conflict. Similarly, I’m fascinated by the intersection of pragmatism and ideology in state administration and wanted to think about politics outside of elections and legislatures. Early on, I briefly considered a comparative study of chaplains in different spaces – the military, prisons, hospitals, and universities. However, I quickly realized that the military is such a rich and complex institution to explore (complete with incredible archival records) that it was better to focus. Moreover, it’s a space in which federal oversight of religion has been constant. Despite occasional efforts to civilianize the chaplaincy, the government continues to commission and pay clergy to serve as chaplains rather than contract out religious services.

Q3. How does your book fit in to other recent scholarship on religion and politics, religion and foreign relations, and religion and twentieth-century U.S. history?

There’s been a wonderful outpouring of scholarship on religion of late, and Enlisting Faith enters a number of these discussions in a number of ways. A lot of scholarship in religion and politics tends toward either religion and conservatism or religion and liberalism. Enlisting Faith braids these strands together by looking at a space where values collide and what counts as “conservative” and what counts as “liberal” is sometimes less obvious. It’s also part of the rich conversations—among scholars and in the public sphere—about religious freedom and religious liberty in the United States. Whereas Tisa Wenger’s new book, Religious Freedom: The Contested History of an American Ideal, unravels ideas and rhetoric, Enlisting Faith takes a social history approach and examines the practice(s) of religious freedom, tracking successes and failures on the ground over the twentieth century.

In terms of religion and foreign policy, my book makes two central contributions. First, it decenters the Cold War as the singular moment in which the American state discovers religion as an instrument of foreign policy. Like Anna Su’s Exporting Religious Freedom, it argues for a broader twentieth-century history of the engagement between American religion and global politics. Second, it documents how chaplains engage in soft diplomacy. In the aftermath of World War II, chaplains shift from working exclusively with American troops to serving Americans and participating in relief work and relationship-building abroad. In postwar Europe and Asia, chaplains acted as brokers, ethnographers, and translators between the military and foreign populations. These roles blended missionary work and State Department outreach efforts in pursuit of military objectives, so they’re conduits between military and civilian, public and private spheres.


Finally, Enlisting Faith makes an argument for taking religion seriously as part of twentieth-century American history and showing how integral religion has been to American politics and social change through a key institution of government and governance. We’ve come a long way since Jon Butler’s “Jack-in-the-Box Faith: The Religion Problem in Modern American History” (2004) and Kevin Schultz and Paul Harvey’s “Everywhere and Nowhere: Recent Trends in American Religious History and Historiography” (2010). Nevertheless, there’s still some foot dragging about the importance of religion outside of narratives about the rise of the right and Islamophobia, especially in histories of the American state.

Q4. I know you did extensive archival research for this project - what was your favorite archival discovery? What made this find so surprising or interesting?

It’s so hard to choose, so I’ll quickly note two:
1. The full set of transcripts for the World War II radio show, “Chaplain Jim.” Crafted through a public-private partnership, broadcast on NBC’s Blue Network, and intended for women on the homefront, the show brought the ecumenical and pluralist worldview of the chaplaincy into American domestic spaces during the war. What was particularly exciting was that the transcripts bear the red pencil corrections of Chief of Chaplains William Arnold, who worked assiduously to make Chaplain Jim “anonymous”—that is, not identifiably Protestant, Catholic, or Jewish. The show is a soap opera filled with intentional messaging about religious pluralism as an American value, and thus offers a wonderfully rich artifact of popular culture in which religion and the state met. The show bridged military-civilian worlds and highlights how the chaplaincy’s gaze included women. The gender politics of the show are unsurprising for the time, but it’s a good reminder that women are not absent from all-male spaces.
2. A post-World War II petition requesting that the military add a “B” for Buddhist on dog tags. Religion was added to dog tags in World War II, but there were only three choices: P for Protestant, C for Catholic, or H for Hebrew. This meant that everyone who wasn’t Catholic or Jewish was labeled Protestant, which (very reasonably!) bothered many minority religions. After the war ended, Japanese-American Buddhists organized to lobby for change, and the signature sheets take up an entire unmarked box in the National Archives. What I mean by this is that that War Department used a decimal classification system to file and label records, and every other box in the Army chaplaincy record group bears a number indicating the topic of its content. Researchers can request, for example, all the records related to “marriage” or “photographs” or “meetings” by pulling boxes by decimal code. But this box had no decimal. This suggests that the chaplaincy had no idea how to label it. It also means the only way to find it is to pull every box in the record group. The petition is a really important document on its own: it gave me great material to think about the meaning of limited religious options for dog tags and how excluded Americans responded to the religious categories created by the state. It’s also a useful reminder that classification systems beget classification systems, and archives often replicate bureaucratic logic that needs to be analyzed.

I could go on, but instead I’ll leave it to readers to discover tri-faith hymnals, records of courts-martial, and other fun sources in the book!

Q5. What do you plan to research for your next project?

Thank you so much for sharing these great details on your new book and future research, Ronit! I look forward to seeing further discussion unfold in the comments section and hope that everyone checks out Enlisting Faith!