Know Your Archives: Historical Foundation of the Cumberland Presbyterian Church

Today's guest post continues our Know Your Archives series in which contributors and readers submit essays about archives of interest to those researching religion in American history. Today's guest post takes us to Cordova, Tennessee and the Historical Foundation of the Cumberland Presbyterian Church and the Cumberland Presbyterian Church in America.

I knew what happened next from newspaper accounts: Indiana Presbytery suspended McCormick from the ministry; a grand jury in Kentucky indicted him; the governor of Indiana agreed to let him be extradited; he fled. McCormick’s story, however, was considerably fleshed out by the minutes of Indiana Presbytery available at the Historical Foundation of the Cumberland Presbyterian Church and the Cumberland Presbyterian Church in America.

As its mouthful of a name indicates, the Historical Foundation is the archive for two denominations. one of which (the CPC) split off from the Presbyterians in 1810 and the other of which (the CPCA) is a historically black church that formed in 1874. The archive is located at the CPC’s denominational headquarters in Cordova, Tennessee, a suburb of Memphis. And it’s where I learned whose slaves McCormick had supposedly helped escape to freedom—a clue which led me to further discoveries.

The CPC is a small denomination now, with fewer than 70,000 members, but it was larger and more influential in the 19th century. The church had 100,000 members around 1860, and three times that number in 1900, with most of its churches in the Tennessee, Ohio, Mississippi, and Missouri river valleys. Then in 1906, the denomination merged with the Presbyterian Church, U.S.A. (PCUSA, or “Northern” church). Anywhere from a third to a half of Cumberland Presbyterians opposed the union and formed a southern rump church. The CPCA was formed by freedpeople who had been members of the CPC during slavery; It has never been very large and now has around 100 congregations.

The Historical Foundation does not have a huge budget. It has no catalogue system, though it did recently acquire one of those nice digital microfilm readers. It only has two employees and only one works full-time—the foundation’s director Susan Knight Gore, who often has to trek around the country hunting down forgotten cemeteries in the woods and sifting through church storage closets and deceased ministers’ papers. (She is also, I should note, my wife’s aunt.) So if you’re interested in visiting the archive it’s a good idea to contact Susan ahead of time.

Oddly enough, the archive doesn’t have an inherent right to any Cumberland Presbyterian records before 1906. According to most state and federal courts, the CPC ceased to exist when it voted to merge with the PCUSA, and the rump church that persisted after the merger was actually a brand-new church with no claim to previous Cumberland Presbyterian properties. So while the minutes of Indiana Presbytery somehow ended up in the Historical Foundation’s hands, the General Assembly minutes from 1829 to 1846 are housed at the Presbyterian Historical Society in Philadelphia. The Historical Foundation only has them on microfilm, as well as a handy typescript.

But this legal problem has given the Historical Foundation a healthy instinct to acquire copies of whatever it can get its hands on, and not just newspapers and minutes. When I told Susan about McCormick’s travails, she located his vertical file and found a photocopy of a pamphlet that he and two other abolitionist ministers had published in 1855. When I found that the Indiana Historical Society had another McCormick pamphlet, she promptly requested a copy.

I’m specifically writing my dissertation on the Cumberland Presbyterians, but the archive’s holdings would be of interest to many historians interested in American evangelicalism. The CPC was, after all, arguably the largest evangelical denomination not to split along sectional lines during the Civil War era. And the 1906 union of the Cumberland and Northern Presbyterian churches is an understudied episode in the story of sectional reconciliation.

The archive would also be of interest to folks studying ecumenicism, missions, and youth ministry, particularly in the past century. There are a lot of materials related to the decades-long-and-still-ongoing effort to reunite the CPCA and the CPC. The archive has the papers, including a Bible with marginalia, of Louisa Woosley, who in 1889 became the first ordained woman minister in any Presbyterian denomination. And they have plenty of robes, chairs, quilts, thimbles, gavels, and other examples of religious material culture.

The reading room sits eight researchers comfortably, four if everyone’s spread out, and there’s a little kids’ table with Lincoln logs. You’re encouraged to take your own photos and there’s no fee for doing so. Within walking distance are two motels, a Waffle House, a donut shop, and a pizza place; you’re also just a minute’s drive from I-40 and can easily hop on and go into the city.

Susan and I dug up some information on two of the slaveholders whom Thomas McCormick allegedly helped “steal negroes” from. Joel Lambert was a Cumberland Presbyterian minister who owned more than 20 slaves; Alexander B. Barret was a wealthy tobacco merchant and owned more than 100. Both men lived in Henderson, Kentucky—indeed, according to the 1850 census and slave schedules, they lived right next to each other. Susan pulled out an old history of Henderson and found they were in business together, having become co-incorporators of the Henderson & Paducah Railroad in March 1854.

Another incorporator of the railroad was Lazarus W. Powell, the governor of Kentucky who called for McCormick’s extradition.

The name Lambert sounded familiar. I remembered a story I had come across in the Louisville Daily Courier: that in July 1854, an enslaved man “belonging to the Rev. Joel Lambert” had been “sun-struck . . . and fell dead in the field where he was mowing.” The article had piqued my interest, but I hadn’t been sure what do with it. 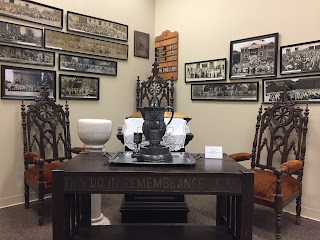 Now I wondered. I hunted around and found another article in an abolitionist paper. According to the Lisbon (Ohio) Anti-Slavery Bugle, the verdict of death for the slave was not only “over heating” but also “imprudent whipping.” Joel Lambert had given the slave “more than a hundred lashes.”

This was just a few months before McCormick made his proclamation at the meeting of Indiana Presbytery. Was this murder the last straw for some of the enslaved people belonging to Lambert and his next-door neighbor? Is it what provoked McCormick to throw caution to the wind? I can’t know for sure. But I couldn’t have put these pieces together without the presbytery minutes.

“How fascinating,” said Susan. “Now be sure and email that to me so I can put it in Lambert’s file.”

William Black is a PhD Candidate at Rice University working on a dissertation titled "No Northern or Southern Religion: Cumberland Presbyterians and the Christian Nation, 1800–1912." He's on Twitter @williamrblack.
Email Post
Labels: Know Your Archives presbyterians