Skip to main content
Labels
Posted by Cushwa Center for the Study of American Catholicism October 21, 2017

Today's guest post comes from Catherine R. Osborne (a former postdoctoral fellow at the Cushwa Center).  Catherine is now Visiting Assistant Professor in the Department of Theological Studies at Loyola Marymount University.  She is also the co-editor of the forthcoming second edition of American Catholic History: A Documentary Reader (NYU, 2017), the subject of today's post.  Thanks, Catherine! 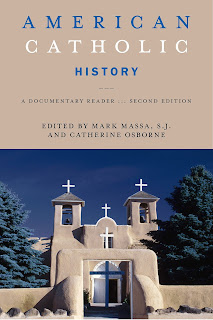 Over a decade ago, I was working at the Francis and Ann Curran Center for American Catholic Studies at Fordham University (https://www.fordham.edu/cs/) when its then co-director, Mark Massa, SJ, asked me if I wanted to participate in his newest project: assembling a one-volume primary source reader for students taking courses in American Catholicism. Drawing on our own research and on the work of earlier anthologists, especially John Tracy Ellis's Documents of American Catholic History and the fabulous nine-volume Orbis series American Catholic Identities: A Documentary History (general editor, Christopher J. Kauffman), we selected, organized, and wrote introductions for 70 documents.

American Catholic History: A Documentary Reader (NYU Press) was released in 2008, and has been adopted in a variety of undergraduate courses since then. Several years ago, this time working at the Cushwa Center for the Study of American Catholicism at the University of Notre Dame, I wondered if it was time to think about reprinting. I contacted our editor to ask if it might be possible to add one or two documents whose omission had bothered me for years.

Out of that conversation developed, not a slightly modified reprint, but a totally new edition of the reader, which will be released November 14. The second edition has 88 documents, of which 34 are new; several have never been published before in any form. (https://nyupress.org/books/9781479874682/)

I want to reflect a little in the rest of this post on three elements that reshaped the new edition.

One of the most helpful things we did was to survey people who had used the first edition in their classrooms. This happened both informally, as we consulted our networks, and in the form of five anonymous readers' reviews from NYU Press. We asked both what documents could be cut from the first edition, and what would be best to add.

The second edition is a better book because of the feedback we were able to get from users. It became clear that most people were using the book to teach cultural history, not intellectual history; "American Catholic History" was also a much more popular title than "American Catholic Studies." It was therefore possible to cut back on the documents in the intellectual-history section of the first edition. On the other hand, many people asked for more material to help them teach immigration and anti-Catholicism in the 19th century. As a result, the reader now includes Lyman Beecher's "A Plea for the West," the Know-Nothing Oath, four of Thomas Nast's anti-Catholic cartoons, and (to help make the point that a lot of immigrants were not interested in assimilation!) the St. Raphael Societies' Memorial.

In the first edition, we tried to include documents from diverse points of view on a number of axes (clergy and laity; men and women; various national immigrant groups) and to provide documents that would give contrasting viewpoints on contentious issues: the schools, race, sexuality broadly writ, worship style. But on balance, reviewing the first edition, we felt it had not gone far enough, and our outside reviewers agreed. As a result, most of the documents that had to be cut because of space issues were clerical, "official," voices. I particularly wanted to include more women and more attention to Native American and African American experiences. Luckily, it was possible to draw not only on documents I had been aware of earlier--I especially wanted to include the 1968 "Statement of the Black Catholic Clergy Caucus"--but on a decade of intervening research. Mary Ewens' research on the Alaskan native order the Sisters of the Snow provided one document; Emily Clark's translation of documents from the Ursulines of New Orleans provided two more. The archivists for the Sinsinawa Dominicans have been looking into the history of the "American Citizenship Curriculum" for Catholic schoolchildren, and a selection from that now fills out the question of how Catholics were taught to be "American Citizens." The relatively new presence of internet archives helped enormously: the Georgetown Slavery Project provided a new document. Other documents came in a more old-fashioned way; having decided to add a document from the ACT UP protest against St. Patrick's Cathedral, I found the full text in a massive, doorstopping primary source reader on LGBT history.

I could go on, but I'll just add two stories. Sometimes you really hit the jackpot: Timothy Matovina directed me towards one of my favorite new documents, a sermon delivered in 2005. Given by a laywoman (one point in its favor!) it addressed devotion to Our Lady of Guadalupe (tragically missing from the first edition) in the context of immigration (helping to fill out both the continuing history of Catholic immigration and the way in which devotion helps immigrants manage their new lives.)

Other times, it's a struggle. One of the fastest-growing Catholic populations since the immigration reforms of the 60s has been Asian-American, especially Vietnamese and Filipino/a. We were unable to find a suitable document for the first edition and it was something I especially wanted to address in the second edition. Yet it was challenging to find the kind of document I wanted, despite getting in touch with several other scholars; what I could find in print, in English, was largely limited to more "official" points of view and gave little sense of the distinctiveness of these communities. I ended up with a news story on a Vietnamese parish that included an interview with a co-founder. But I am also now in touch with several scholars of (secular) Vietnamese-American history who have promised to keep an eye out for primary sources on Catholicism that they might be able to translate. Third edition?

The first edition's last document, chronologically, dated to 1988. We were reluctant to go too far into the present on the grounds that most people would want to use their own selection of recent documents to make whatever points they needed to make. In 2008, 1988 was a reasonable place to stop. In 2017, it clearly wasn't! So, we needed to make some decisions about what more recent developments seemed likely to still be salient in the future. Kate Dugan made a successful pitch for John Paul II's Denver World Youth Day speech (1993), where he discussed the culture of life and inspired a generation of "JPII Catholics." A few other more recent documents found their way into different sections. But we also chose to add a five-document section called "New Horizons," dealing with issues we felt would continue to be important. In order, these were the sexual abuse crisis; parish closings (on the one hand) and growth (on the other); and questions of gender and authority as exemplified in the Leadership Conference of Women Religious investigation. Finally, we concluded with Pope Francis's address to Congress in 2015, on the theory that it would allow courses to end with a reconsideration of what is interesting about American Catholicism.

To close this blog post on a personal note, this is the choice I wonder the most about right now. Shortly after the text of the book was finalized, Donald Trump was elected president, and an entire set of narratives of American history were, once again, profoundly disrupted. (Along with everything else being profoundly disrupted.) Francis's address was not entirely hopeful, but it did suggest a path forward to hemispheric unity and service which does not seem, as of October 2017, to be the way that we're heading. I have been using samples from the new reader with my own American Catholic History class this fall, and I am still not sure what document is going to close out the class in December.