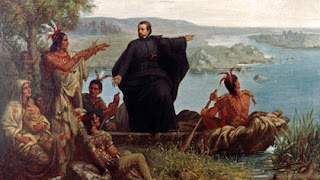 This post offers a very brief preview of a volume of essays on post-restoration Jesuits edited by Stephen Schloesser and Kyle Roberts of Loyola University and published with Brill.


As readers of this blog are well aware, the Jesuits were “restored” in 1814 by Pope Pius VII after being suppressed by Pope Clement XIV in 1773. The men who remained in the order went underground for over forty years. Historians have noted that the Society of Jesus that emerged from that crucible held a deep aversion towards liberalism and nationalism. Yet, for this reason and others, the essays in
Crossings and Dwellings: Restored Jesuits, Women Religion and American Experience make the case that a study of post-Restoration Jesuits (1814-1965) can provide historians a useful lens for studying American modernity.

Post-Restoration Jesuits inhabited a tension: they were loyal to the papacy and fierce critics of nationalism, yet they respected the separation of Church and State and built a range of institutions help Catholic immigrants become democratic citizens. How can this tension (one studied by John McGreevy in American Jesuits and the World) help historians to understand America between Jacksonian Democracy and the Great Society?

One of the innovative features of Crossings in Dwellings is an organization schema linked to Tom Tweed’s theory of religion. “Tweed offers a theory of religion,” the editors Kyle Roberts and Stephen Schloesser note, "that addresses the centrality of movement, the interdependence of relation, and the importance of position in understanding the religious life of transnational migrants. His formulation is well suited to the experience of thousands of Jesuits who have come to the United States from  Europe and around the world since the restoration."The first section, “Crossings I”, examines post-restoration Jesuits interactions with indigenous people and immigrants. Section two, “Dwellings I,” looks at a series of “urban hybrids” such as city religions, medical schools, and universities. “Dwellings II” then looks at the tension between the Jesuit’s appreciation for the nation and their continued critiques of the nation-state in college curricula, the work of Jesuit playwright Daniel Lord, and activist Daniel Berrigan. And “Crossings II” meditates on a series of borderlands and boundaries between institutions of higher learning, Jesuit John Ford and obliteration bombing, Native Americans, and ecumenism.

The essays offer an empirical grounding of the tension between critique and sympathy and Tweed's theory helps the reader to see these conflicts in a continuous push of crossing, dwelling, and bubbling. Jesuits not only traversed the Atlantic Ocean, they moved domestically between New York and New Orleans, Washington D.C. and Alaska. Along the way they interacted with women religious from a range of orders. They took trunks, bags, books, spoons, chalices, bibles, pens, paintings, and all sorts of other materialities with them wherever they went. The continued motion was matched with the continued conflict between nation and faith. Nineteenth century Jesuit hospitals insisted on maintaining a commitment to the early modern curricula even as they adapted their institutions to the new standards of professionalism. Orestes Brownson, the most important American Catholic intellectual of the nineteenth century, lambasted the Jesuits for their lack of enthusiasm about the Union. Holy Cross College had three goals for their students in the nineteenth century: (1) produce a devotional tendency focused on the pope; (2) help students embrace the liberalism of the constitution; and (3) foster a spirit of service to non-Catholics and even anti-Catholics. How would an undergraduate come to terms with those tensions? E. Boyd Barret SJ insisted on studying and teaching psychoanalysis at the start of the twentieth century, much to the growing dismay of his superiors. Yet, he was sent back and forth between London and New York for further studies of psychoanalysis. He eventually left the Jesuits in 1925.  Daniel Berrigan SJ, it is worth recalling, moved from a reverence towards the US to a deep critique of its violence as the twentieth century pressed on.  Crossings and Dwellings places these stories in the deeper context of the post-Reformation Society of Jesus.

How does the post-restoration Jesuit imaginary, a tension and a thing in motion, help us to understand American history in the nineteenth and twentieth centuries? As the essays show, American history has a cast of characters, the Jesuits – with a wide range of institutions at their disposal – who don’t see the nation-state as the end of history. In other words, the nation-state in American modernity is a contested entity, as we know, but it does not define the mental horizons of an important contingent of priests who were deeply transformed by the democratic revolutions of the late 18th century. They might be unique in their hesitation towards nationalism, one of the most important characteristics of modernity. Yet the Jesuits also show us, through the case studies, that the nation-state remained an important layer of reality. Jesuits developed institutions to help immigrants become citizens; to assist Catholics in accessing the corridors of power; and they created curricula to foster a connection between faith and nation. These essays give us a view into the tension-ridden worldview of American Jesuits. This should help historians of religion to think more clearly about the relationship between faith and nation.