The Oxford Research Encyclopedia of Religion Now Available for Subscription 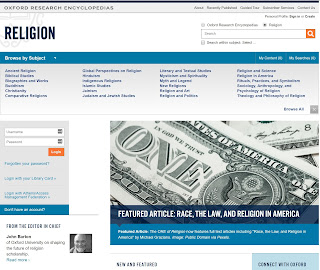 The Oxford Research Encyclopedia of Religion, a massive compendium of peer-reviewed essays on a range of topics in religion and religious history, is now available for subscription from Oxford.

The "Religion in America" heading features essays on a range of key themes, including race, gender, class, foreign relations, politics, culture, and art.

A number of RiAH bloggers contributed essays to this project, which the editors intend to serve as an ever-evolving online resource.


Some of the contributions from RiAH folks that have already been published include:

"Bibles and Tracts in Print Culture in America," by Lincoln Mullen

"Race, the Law, and Religion in America," by Michael Graziano

"Race, Culture, and Religion in the American South," by Paul Harvey


Forthcoming essays from RiAH contributors include:

"Race and Protestantism in America," by Lauren Frances Turek

"Culture, Entertainment, and Religion in America," by Randall J. Stephens


Plus there are dozens of articles on religion in American history from other well-known scholars such as Matthew Avery Sutton, Sylvester Johnson, Kathryn Gin Lum, John Corrigan (one of the editors), and Dianne Kirby.

This is an exciting resource that will be beneficial for graduate students studying for their comprehensive exams, for teaching, and for scholars eager to explore new areas within the field of religion and religious history.

For more details on the genesis of this project, see the video below:

Charlie McCrary said…
Thanks, Lauren, for drawing our attention to this great resource. I've enjoyed many of these pieces and look forward to the forthcoming ones. I'm disappointed that it is not remaining open access, though the subscription model was always the plan. I hope all of us with access will share liberally with those who don't.

I just wanted to highlight Anthony Petro's piece, "Race, Gender, Sexuality, and Religion in North America," as my favorite of the bunch. It's extremely helpful as a resource but also creatively organized and skillfully written.
September 28, 2017 at 12:55 PM

Lauren Turek said…
Thank you, Charlie! I too wish it would remain open access, as it is a tremendous resource. I personally find the primary source and digital recommendations that each article includes absolutely invaluable. They're also great teaching tools - I can see assigning them to my advanced undergrads before they start their capstone research, for example (and, admittedly, I assigned my entry to the students in my religion and politics capstone this semester).
September 28, 2017 at 2:43 PM

Judith Weisenfeld said…
Thanks, Lauren. Oxford's Research Encyclopedia of American History (http://americanhistory.oxfordre.com/)also has articles on religious history, some by authors featured in the Religion encyclopedia and additional ones.
September 29, 2017 at 2:12 PM

Lauren Turek said…
Another great resource - Oxford is on a roll with these! Thank you so much for the link, Judith.
September 29, 2017 at 8:02 PM