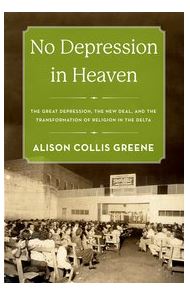 [Today's post is the first of several reflections on Allison Collis Greene's No Depression in Heaven: The Great Depression of Religion in the Delta. Look for another post tomorrow and yet another on Sept 9. ]

Why did Southern whites applaud Franklin Delano Roosevelt's presidency and the coming of the New Deal? Why did many of these same Southern whites later distance themselves from the same policies? To what extent have southern whites' attitudes toward charity, the government "dole," and the system of capitalism changed over the twentieth century?

Alison Collis Greene's heartwrenching and pathbreaking book answers all of these questions as it teaches us to parse the differences between history and memory. While many white Southerners remember government social programs as antithetical to the Christian ethics of hard work and personal responsibility, they forget that many of their own religious institutions embraced the New Deal with open arms in the depths of the Great Depression. Why did so churches do so, and why have so many of their members forgotten this embrace?

Greene's book examines the relationship between charitable institutions and the poor in the Misssippi Delta from the early twentieth century through the start of World War II. It shows that elite Southern women effected a Southern Social Gospel in the early twentieth century, particularly with regards to medical care, medical education, and aide to women and orphans. As spouses and children of prominent business owners, they always stood somewhat at odds with church teachings on the dangers of dependence upon charity and the virtues of personal responsibility. However, their work created the (albeit minimalist) infrastructure of charity that addressed the widespread onset of poverty starting in the 1920s.

This charity, as Greene teaches us with stunning detail, was never enough to actually address the depths of poverty in Memphis and the surrouding Misssippi Delta. By the time FDR took office, churches and charities throughout the South were going (or had already gone) bankrupt. Many had to spend more time attending to their creditors than to their members, not to mention to the poor outside of their churches. While Catholic and Jewish charities were able to raise a bit more money to support their communities than Protestant charities, the poor in the Missssippi Delta overall only received a small fraction of the public aide that poor people received on the average. Many Protestants realized that they relied upon voluntary donations. Without the intervention of the federal government, the future of their charities--and even their churches themselves--were not at all secure.

Greene teaches us that FDR and his programs for aide to the poor were widely welcomed by white and black Southerners as an answer to prayer. Poor, black and white Southerners shaped New Deal policy through their ready embrace of government "handouts" and programs like Social Security. However, the New Deal in the South, like in every region of the country, was largely administered by local white elites. Many administered programs to benefit white elite businesses and provide enough of a social safety net to recreate a white middling class. In short, Southern Democrats used the New Deal--and, indeed, widespread religious support for the New Deal--to preserve white supremacy. As this white middling class revived, conservative elites began rewriting the history of the Great Depression. They revived early twentieth century narratives about the problems of charity and the dangers of a powerful state. They quickly enforced a collective amnesia about the ways that their own churches had nearly faced financial and social ruin in the face of the Depression.

Why does it matter that Southern churches were "saved" by the New Deal? Why does it matter that Southern attitudes toward public aide have shifted more than most care to admit throughout the twentieth century? Historians of the New Deal, of Southern History, of American Christianity, of the Welfare State, and of African American History might each answer this question slightly differently.

I'll highlight here just one reason this study matters: Greene's work teaches us that we cannot understand shifts in religious convictions outside of the context of social history. Beliefs are powerful explanations for historical realities, but they are also quick to shift with changing circumstances. Beliefs are also as easy to forget as they are to remember. Despite how tempting it may seem to study the history of ideas--of theology--in a vacuum, Greene's work reminds me that this approach blinds us to the many forces of historical causality. We simply cannot explain shifts in religious belief without understanding the social, political and economic circumstances that supported them.
Email Post
Labels: book reviews janine's posts social gospel southern religion