The Fence: Mainline Protestants and Immigration Sixty Years Ago

Before there was talk of a wall, there was The Fence. First circulated in 1956, The Fence was a pamphlet that demonstrated sharp divisions among Americans over immigration policy. I first encountered this booklet while researching for my dissertation on white Protestant responses to immigration between 1924 and 1965. As I sifted through material from the Presbyterian Historical Archives, I came to realize that the history surrounding The Fence speaks volumes about midcentury American society and the position of white Protestants who sponsored its publication. 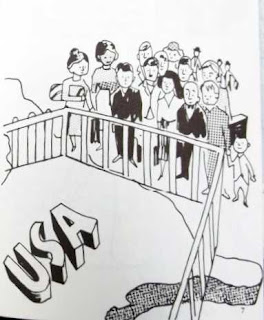 Many mainline Protestant leaders contributed to the public conversation surrounding the McCarran-Walter Act of 1952, a bill that aimed to revamp the nation’s immigration system. While it ended Japanese exclusion, its critics pointed out that the legislation was still premised on unevenly distributed quotas based on national origins and other forms of discrimination. Congress eventually passed the bill sponsored by Nevada Senator Pat McCarran and Pennsylvania Congressman Francis Walter, but only after overriding Harry Truman’s veto. Most mainline Protestant denominations opposed the legislation, drawing upon a mix of postwar internationalism, social gospel ideals, and common concern for home missions. While the bill was being considered, the National Council of Churches (NCC) passed a statement in March 1952 calling for Congress to reform the quota system and demanding that the United States assume its global responsibilities and aid refugees. It is striking that in Truman’s veto message of McCarran-Walter, he even invoked the social gospel rhetoric of his Protestant contemporaries, claiming that the law “repudiates our basic religious concepts, our belief in the brotherhood of man.” Following its passage, the mainline periodical Christian Century questioned the law and had to fend off an angry rebuttal by McCarran, and Methodist Bishop G. Bromley Oxnam even had to answer for his criticism of the legislation before the House Un-American Activities Committee, on which Walter served, in 1953.


Following the bill’s passage, mainline Protestant groups continued to voice their concerns over an immigration system predicated on national origins, often through the medium of pamphlets. The Fence was one such effort to educate constituents of the McCarran-Walter Act’s shortcomings. The Fence was first published in 1956 and then reprinted and expanded in 1959 in time for World Refugee Year. By that year, sponsors had circulated 85,000 copies. The tract itself follows a conversation between a boy, who represented European refugees fleeing communism, and a police officer guarding a gate into the United States. The officer assures the boy that America is taking proper action to help, but the boy then produces a copy of the McCarran-Walter Act and tries to explain its flaws. At this point, an American lawyer comes to the boy’s defense. He points out that the law favors British, Irish, and German immigrants and refugees, while shunning others from eastern and southern Europe, Asia, and Africa. The officer eventually reconsiders his views, coming to the conclusion, “Sounds un-American to me.” In sum, The Fence contends that McCarran-Walter promotes racial discrimination, does not adequately address the refugee crisis, and handicaps foreign policy, and that immigrants are a boon to labor, are law-abiding, and overall “strengthen the nation.” Historian Robert Fleegler suggests in Ellis Island Nation that the pamphlet draws upon the idea of “contributionism,” or the notion coming into vogue by the 1950s that America is a nation of immigrants.

The Fence was made available at a time when mainline Protestants frequently teamed up with their Jewish and Catholic counterparts and other civic organizations, forming a broad consensus on various sociopolitical issues. As Kevin Schultz has shown in Tri-Faith America, midcentury Americans were reconsidering the boundaries of the nation’s religious identity and beginning to accept a Judeo-Christian pluralism, though, as I argue in my dissertation, even progressive mainliners still flirted occasionally with a Protestant vision for the nation. Yet, the diversity of organizations that signed off on The Fence is striking. A cross section of mainline Protestant denominations sponsored the tract, in addition to the NCC’s United Church Women and the Young Women’s Christian Association. Moreover, Protestant groups promoted the pamphlet alongside the American Jewish Committee, National Council of Jewish Women, and National Urban League, while also joining forces with a couple of labor groups. Such a spirit of unity and cooperation, however, should not be seen as representative of mainline American Protestantism as a whole. While many local church councils and societies joined in the chorus of those criticizing the McCarran-Walter Act, more conservative Protestants resented their denominations’ views.

The liberal positions behind The Fence invited varied opinions on immigration and invoked a lingering nativism among some Protestant Americans. One Presbyterian from Pennsylvania wrote his denomination criticizing its support of the “clever, although elemental piece of propaganda.” He believed the Presbyterian Church in the U.S.A. used the pamphlet “without any consultation of the church membership” and suggested The Fence was “part of an under cover drive . . . to complete a latter-day influx by peoples with widely divergent viewpoints to those of the earlier immigrants who made America what it is today." The letter demonstrates a divide between liberal and conservative Protestants within the same denomination, something Elesha Coffman addresses in her work, and tension between two competing interpretations of national identity.

To help with promotion, a form for ordering The Fence employed the logic often seen in the appeals of charitable organizations: take 20 minutes to read the pamphlet and write your congressman, and thus make a difference. By taking action, the reader would help open up a “hole in the fence – a gate to opportunity – a new life in the free world for an immigrant.” Some white Protestants believed such a “gate” should be made available, and on an equal basis for all immigrants and refugees; these more liberal Protestants had grown comfortable with a limited form of pluralism. Conservative church members, however, maintained another vision for the nation, one that clung to the idea that America was a Protestant Christian nation where one could easily identify the insiders from the outsiders. Whether due to fences, creeds, or iron curtains, Americans were hard pressed to find the right words for consensus during the postwar period.
Email Post
Labels: guest posts liberal Protestantism religion and immigration religious pluralism