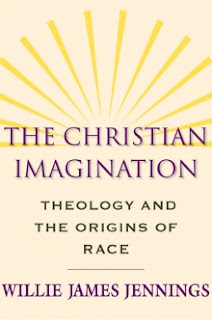 As historians, you all know this, but it's worth stating anyway: we are shaped by our contexts – theological, geographical, class, race, family, gender, national, etc.  Sometimes we begin to really see the water in which we swim by stepping into another stream.  Other times, reading about our stream's origins, its headwaters, can help us see our stream more clearly.  I study American history, my research is primarily in the twentieth century, and I don't read outside my field nearly enough.  But this summer I had the opportunity to do so with a group of Wheaton College colleagues when we read Willie Jennings's The Christian Imagination: Theology and the Origins of Race.  Jennings, a theologian, has written a historical piece that explores the interconnections between western Christianity, racial hierarchies, capitalism, commodification of bodies and places, and pedagogy.  Those who study religion in American history and have been shaped by – and shape – the academy will benefit from the book (although, if you're an Americanist, the only character that may be familiar is Olaudah Equiano).

Jennings shows how the racial hierarchies westerners imagined in the 15th century as they interacted with people living in South America and Africa, hierarchies that were inseparable from a theological pedagogy that assumed a one-way transfer of knowledge from the educated to the ignorant, deformed what he called "the Christian imagination."  For Jennings, "Christian imagination" refers to the possibilities of what could constitute Christianity.  These racial and pedagogical hierarchies developed in the context of mercantile capitalism, and the combination commodified bodies and land in new and detrimental ways. 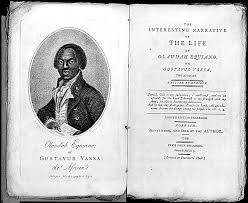 As a theologian, Jennings argues that this complicated history has mangled the Christian imagination, leading Christians to imagine that God's call on their lives is to relate primarily to Him, not to one another, and so has limited the possibilities of Christians from different backgrounds joining together in intimacy, being with one another in what he calls "spaces of communion."  Jennings reads Olaudah Equiano, for instance, as longing for communion with the white captors and freemen who were his brothers in Christ, as well as his mostly white readers.  Equiano, who controlled the presentation of his book, included an image of himself looking out at the reader on the cover of his The Interesting Narrative of the Life of Olaudah Equiano (1789), which contrasted the stylistic standards of the book's genre, but invited people into relationship.  Nonetheless, when he failed to find intimacy with his fellow Christians, Equiano sustained himself by telling himself that God was all he really needed.  For Jennings the theologian, this theological narrative (common in western Christianity) is wrong.

Jennings grounds his arguments in particular places, with particular people, and pays careful attention to how western Christians commodified places, and thus were able to ignore the details of those places, imagining themselves as transcending place.  I have written about place before.  I learned the importance of where one lives when I moved to Chicago's Austin neighborhood, which was radically different from the wealthy suburb in which I grew up.  In Austin my husband and I attended Rock of Our Salvation Evangelical Free Church, a neighborhood interracial church, and attended closely to what it meant to live in as white people in a black neighborhood with many people living at or below the poverty line.  We were pleased when families moved into vacant houses, we paid attention to who was standing on the corner, and we knew the impact of a homeowner dying, potentially leaving a house vacant.  Perhaps because living in Austin was such a cross-cultural experience, we became immersed in the place, aware of how different it was from our home towns every time we came back into our neighborhood.  We bought a house, and, in my own mind, my identity became intricately tied up in the place we were putting down roots.  When I saw other white people in the neighborhood (besides those I knew), I wondered what they were doing there because they didn't belong.  Perhaps they were up to no good.  I walked the neighborhood daily, either with a neighbor to exercise or going to the bus or the train.  When people asked me in casual conversation why I was there, I responded that we went to church in the neighborhood, we owned a house.  We belonged.

Chicagoland's racial geographies play a prominent role in my own scholarship, and I know – and want to teach others – that the segregation I experienced growing up and in the Austin neighborhood was created.  It did not just happen.  Its consequences, for wealthy and poor people, Latino, Native American, white, black (and every other racial/ethnic group) are significant.  As Soong-Chan Rah (another theologian) argues in TheNext Evangelicalism, segregated Christianity leads segregated groups to be held in cultural captivity.  Rah explores white evangelicalism in particular, arguing that we – my tradition, my people – are held captive to the broader American culture's history and practice of racism, individualism, and consumerism and materialism.

For Jennings, Christians must identify as Gentiles, as people grafted into Israel, outsiders adopting a new way of life, submitting themselves to that life.  When we were at Rock Church in the Austin neighborhood, we were part of one of those rare spaces of communion, spaces where people from different backgrounds loved and valued one another as they lived together.  There, my academic work mattered, but was not the only source of knowledge and wisdom.  There I flourished as I submitted to those different from me.

After Wheaton College hired me, my husband and I moved to Wheaton.  I was pregnant and we left not because we wanted to raise our child in the suburbs, but because I am a working mom, and if we lived close to where I worked, we could integrate our lives our lives more easily with work and neighborhood.  People sometimes think we left because we thought it was dangerous in Austin.  I think it might be more dangerous in Wheaton.  Here, delightful, loving people can easily, and sometimes unintentionally, require those different from its powerful inhabitants to conform.  There are fewer spaces of communion.  Here, what might appear to be flourishing may too often ignore the history of American places, which is a history of race.


In our conversation with Willie Jennings, he called our college to account for its place, to not hover above Wheaton, Chicagoland, and the Midwest, but to be in it.  Why does accounting for place matter?  It's first of all good for our souls.  I am reading a new book, Wendell Berry andHigher Education: Cultivating Virtues of Place by Jack Baker and Jeffrey Bilbro (University of Kentucky Press, 2017) that exegetes Wendell Berry's work for colleges and universities (secular and religious alike), arguing that institutions of higher education ought to form students' "imaginations and affections . . . so that rather than desiring upward mobility, they can imagine healthy, placed lives," because "contentment is a virtue that is particularly difficult for those of us in higher education to practice; universities exist to prepare students to lead better lives in better places, and this obsession with something better erodes our ability to be content" (1).  Universities' and colleges' accounting for place also can help reckon with - and perhaps right - the racial histories of their particular places.  Perhaps I am at Wheaton in part to help my students, my colleagues, myself, other evangelicals, to reckon with our racial past, and the ways it can be mapped on to places and spaces.  In doing so, we might be able to live better in this place that is Wheaton.  After all, as the black author James Baldwin wrote in 1963, "to accept one's past – one's history – is not the same thing as drowning in it; it is learning how to use it."*