I’m trying something new this semester. After six years of teaching roughly the same books in my U.S. history survey class (1877-present), I’m changing most of them up. Yay for the time tenure provides! My motivation is two-fold. First, let’s be honest, I’m pretty sick of the ones I’ve got. They’ve worked great, but I teach this course every semester, and six years is a long time. But second, I also want to do a better job of incorporating religion into the course narrative.

This is perhaps an odd situation for someone who works at a religiously affiliated institution (Baylor). Nevertheless, while I’ve generally been happy with how I have integrated religious history into my upper-level courses, I’ve never quite found my groove with the survey. (So many topics! So little time!)

One problem is, of course, the textbook. I’ve noted in a previous post the surprising similarities I’ve found teaching fundamentalism and teaching feminism. Well, I’ve also found a similarity between how textbooks handle religion and how they handle women: the dreaded sidebar. (And don’t even get me started with how they (don’t) handle the history of education, or science….)

A notable exception is the most recent (4th edition) of the document reader Major Problems in American History, Vol. II: Since 1865, edited by Elizabeth Cobbs and Ed Blum. They purposefully incorporated more primary and secondary sources on the subject of American religious history into this edition with the result that the book is now one of the best for this topic. But I am experimenting with going without a document reader, so I was still left with the textbook problem.

I asked colleagues for their syllabi and discovered one main way to tackle the marginalization of religion in the American history survey is simply to assign a regular textbook and then use book-length primary or secondary sources on religious history as supplements. For example, I’ve heard positive reports from colleagues who have taught the U.S. history survey and assigned Barry Hankins' Jesus and Gin: Evangelicalism, The Roaring Twenties, and Today's Culture Wars, Charles Marsh’s God’s Long Summer: Stories of Faith and Civil Rights, or Darren Dochuk’s From Bible Belt to Sun Belt: Plain-Folk Religion, Grassroots Politics, and the Rise of Evangelical Conservatism. 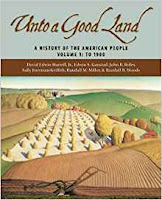 In the end, I decided to experiment with a different direction. First, I’m trying out an unusual textbook, Unto a Good Land: A History of the American People, Vol. 2: From 1865, written with the explicit intention of incorporating religion well into the narrative of U.S. history. It employs sidebars, to be sure, but also weaves religious history into its treatment of other topics. A drawback is that it has not been updated since 2005, so needs to be supplemented with subsequent scholarship.

Second, I chose additional book-length readings that took a similar approach. They are not about religious history per se, but all incorporate 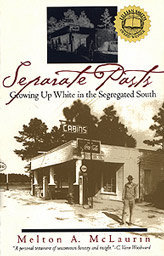 it as a significant element: Timothy Gilfoyle's The Urban Underworld in Late Nineteenth-Century New York: The Autobiography of George Appo with Related Documents from Bedford St. Martin’s Series in History and Culture; Melton McLaurin’s Separate Pasts: Growing Up White in the Segregated South; and Donald Critchlow’s Phyllis Schlalfy and Grassroots Conservatism: A Woman's Crusade (which I’ve used before). Appo was the son of an Irish immigrant and a Chinese immigrant. He lived a life of crime before becoming a Progressive reformer, and he reflects on the place of religion in the lives of both prisoners and reformers. McLaurin similarly offers poignant reflections on the intersection of religious and racial ideals in his native North Carolina in the 1950s. And Schlafly’s Catholicism weaves throughout Critchlow’s narrative, though its focus is politics.

It should be noted that I’m also assigning various brief primary sources and Jill Lepore’s The Secret History of Wonder Woman. Because Wonder Woman.

I’m hoping that using this new collection of books will enable students to walk away with a sense of the connections between religious history and other aspects of American life. I will report back after this semester on how the experiment has gone! In the meantime, I’d love to hear from others what approaches you have found work well for incorporating religious history into the U.S. history survey.

Unknown said…
More coverage of religion in American history is always a noble cause. I've found that students are drawn to the 80s "telescandals" and the 90s "cults." Susan Harding's The Book of Jerry Falwell has a short and accessible chapter, "The Born-Again Telescandals." David Chidester's Salvation and Suicide is always good for larger discussion of "cults"; and Nancy Ammerman has a short piece in Armageddon in Waco entitled "Waco, Federal Law Enforcement, and Scholars of Religion."
August 22, 2017 at 5:50 PM