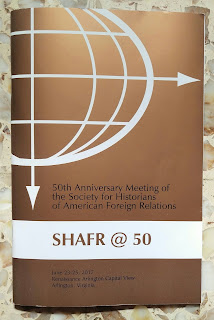 This past weekend, the Society for Historians of American Foreign Relations celebrated its fiftieth anniversary (as well as the fortieth anniversary of the journal Diplomatic History) at its annual meeting in Arlington, VA. Just as I reported last year, the conference included a number of panels and roundtable discussions on the topic of religion in American history and foreign relations. There were, in fact, so many good panels on religion that I could not even attend all of them owing to my unfortunate inability to be in multiple places at once! As such, in addition to providing my own overview of the exciting work that scholars showcased at the SHAFR meeting this year, I have included some reflections from other attendees as well.


The first religion-themed panel that I attended was a roundtable discussion about David Hollinger's forthcoming book Protestants Abroad: How Missionaries Tried to Change the World but Changed America, which is due out in October. Daniel Immerwahr organized the roundtable, with Hollinger offering an overview of the project, Melani McAlister, Madeline Hsu, and Andrew Preston providing commentary on the book, and David Engerman moderating. Hollinger outlined his argument that the mainline Protestant missionary project played a key role in "deprovincializing" America, fostering multiculturalism in American life and ecumenicism in American churches in the years between 1890 and the Vietnam war. He suggested that missionaries, the children of missionaries, and the organizations that supported missionary endeavors created what he termed "missionary cosmopolitanism," which contributed to a nascent embrace of other cultures and a strong critique of colonialism—a critique which spurred debates about the missionary project itself and a turn toward more humanitarian aid. Hollinger also revealed how the missionary project, and the cosmopolitanism it inspired among the groups he examined, led these missionaries to engage in debates over the role of the United States in the world in this period. He argued that the alliances some of these Protestants developed with colonized peoples through their missionary work pushed them to embrace an idealism about the potential for U.S. foreign policy to act as a force of morality in international relations, advancing humanitarian and anti-colonialist goals. Hollinger shared a number of wonderful, engaging anecdotes about missionaries such as Kenneth Landon, who ended up briefing Franklin D. Roosevelt and working for the OSS during World War II because he was one of the only experts on Thailand the State Department could find, and about the role some missionaries played in enforcing humane interrogations of POWs in the Pacific theater. Yet, as he concluded, the Vietnam war "shattered their idealism" about the "morality of American policy."


Melani McAlister (and indeed all of the panelists) praised Hollinger's book, and dove into a deeper discussion of the critique these particular Protestants leveled against the missionary project. She noted that Hollinger's argument about how the de-emphasis of proselytism and focus on humanitarian aid in the post-World War I era provided the "fuel" in the split between modernists and fundamentalists not only placed this split in a global context, but that it also contributed to decline in the mainline churches. Madeline Hsu discussed the power dynamics that existed between missionaries and those peoples that they evangelized, particularly in China, which Hollinger explores in the book. Andrew Preston closed out the commentary by describing how the Protestants Hollinger discusses challenged and complicated the typical image of "missionaries as the tip of the imperial spear," due to the critiques of imperialism they leveled. Preston also highlighted Hollinger's emphasis on the relationship between ecumenicism and internationalism. In his response, Hollinger picked up on the thread that McAlister and Preston raised about the significance of the ecumenical movement, arguing that even though he believes that much of the historiography on American Protestantism has sought to "diminish the gap between evangelicals or fundamentalists and ecumenicals," the divide grew extreme in the period he covers in his book and that divide emerged because of the missionary project itself. All in all, a very exciting glimpse at what promises to be a defining book.

Later, I attended a panel entitled "Faith and Foreign Affairs: Religion, Non-State Actors, and U.S. Foreign Relations in the Early Twentieth Century," which featured three exciting papers. Kelly Shannon shared research from a brand new project on U.S. relations with Iran in the nineteenth and early twentieth centuries. The project is to be about a range of non-state actors, not just religious actors, but for this panel she gave a fascinating paper that explored the crucial role American Presbyterian missionaries played in developing official diplomatic relations between the two states. She also shared the wonderful story of Howard Baskerville, a Presbyterian missionary who resigned his post to join in the Persian Constitutional Revolution of 1909, as part of a larger exploration of how missionaries shaped perceptions that the American public developed about Iranians and that Iranians developed about Americans. Jonathan Chilcote gave a paper on the efforts that American missionaries in Bombay engaged in to spur contributions to help those suffering from the Spanish influenza in India in 1918-1920. In this compelling piece, Chilcote suggested that these missionaries "saw the flu as an opportunity to remake India in America's image." Denise Jenison rounded out the panel with a presentation of research from her dissertation, giving a paper on Arab-American efforts to influence official U.S. policy towards Palestine in the aftermath of World War II. Her excellent paper delved into the creation of the Institute of Arab-American Affairs, which sought to win support for Palestine by convincing American Christians of the link between Christian missionary work and Arab nationalism, as well as by stressing the close relationship that Palestinian Christians and Muslims shared.

I was also really excited for the "Foreign Religions and Foreign Relations: U.S. Engagements with the World in the Nineteenth Century" panel, in part because SHAFR does not feature nearly enough panels on pre-twentieth century foreign relations. The three papers on this panel, which Tisa Wenger chaired, were exceptional. Kathryn Gin Lum started out with a paper on mapping and geographic imaginings of the "heathen world" as lands that were "wild and overgrown because of the sin/heathenism of their inhabitants." She linked this tendency to view the regions of the world populated by non-Christians as undifferentiated and wild to the development and propagation of racist ideologies, including scientific racism, and to the belief that Westerners should intervene in these regions in particular ways. Emily Conroy-Krutz also examined maps in her fascinating paper on what she termed "missionary intelligence," or the information that missionaries shared about the countries they evangelized. She noted that the maps and information that missionaries discussed at monthly prayer concerts "contributed to the creation of a mental map of the world" for nineteenth century Americans, acting as a "source of knowledge production" about the wider world. Kate Moran turned her focus to late nineteenth century Protestant travelogues to examined the changing depictions of the Pope and Catholic authority in Rome during a period of bewildering social change in the United States and upheaval in Italy. She compared the positive descriptions of Pope Pius IX to the negative depictions of earlier Popes and the virulent anti-Catholicism of antebellum travelogues, making a riveting argument that in recasting their views of the pope in light of the Risorgimento, "Catholic power became a way [for Protestants] to understand their own concerns about social order in [their] present." This panel spurred excellent discussion of the role of religion in society and of the interrelationship of race and religion.

Dan Hummel also attended SHAFR (he presented on a fantastic new open source online U.S. foreign relations primary source reader, Voices & Visions, that he helped develop), and sent in the following report on one of the panels he attended, "American Zionism and U.S.-Israel Relations from the 1950s to the 1990s.":

"This excellent panel explored numerous facets of the U.S. relationship to Israel and the development of Jewish Zionism. Salim Yaqub aptly summarized that the panelists overlapped precisely in their study of the changing relationship between American Jews and Israel. Doug Rossinow traced the origins of the American Israel Public Affairs Committee (AIPAC, originally American Zionist Committee for Public Affairs) to a crisis in Israel’s public image after the IDF’s massacre of civilians in the village of Qibya in October 1953. He examined how AIPAC’s founder, I.L. Kenan, sought to unite American Zionists and Jewish non-Zionists. Rossinow concluded that the staunch support of the Israel lobby since 1953 is unsurprising given its origins in defending Israel’s largely indefensible actions at Qibya. Sara Hirschorn spoke about American Jews who have become leaders in the settlement movement in the West Bank. As her recently-published book, City on a Hilltop (Harvard Press, 2017), expounds upon, American Jews make up a large and ideologically potent segment of the current settler movement and hold more diverse religious, political, and economic motivations than we normally assume. Seth Anziska recounted the history of the opening of dialogue between the U.S. and the PLO in December 1988 and emphasized the role of American Jewish actors breaking with organized American Jewish attitudes toward the PLO. While the Reagan administration opened dialogue with the PLO, its intent was not necessarily to pave the way for independent Palestinia statehood. The differing agendas of American Jews, Israelis, the U.S. government, and the PLO poin to the ways that the U.S. government and PLO were pursuing incommensurate policy goals, even as they began to talk to one another."

Clearly, the religious turn in U.S. foreign relations history over the past decade has led to a proliferation of exciting work in this area. SHAFR is an incredibly welcoming place for scholars of religion (scholars of a wide variety of historical subfields, actually, as U.S. foreign relations history intersects with many aspects of domestic and international history as well as a number of methodological approaches) and the presentations are always of the highest quality. I am very much looking forward to next year's annual meeting, which will be held in Philadelphia in June 2018. Happy 50th Anniversary to SHAFR and here is to the next 50! 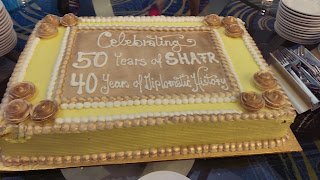 Below, I have listed all of the panels and individual papers that reflected in some way on religion and American diplomatic history, broadly defined. A link to the full program is available here.

Panel 18: Christian Mission, U.S. Power, and Domestic and Foreign Publics from
the Early Republic to the Cold War

Papers:
Protestant Mission, American Empire, and the Uses of History in Hawaii and the
Philippines, 1880-1920
Tom Smith, University of Cambridge

Foreign Missionaries and the “Spirit of Benevolence” in the Early Republic
Ashley Moreshead, University of Central Florida

The Principles of Relief: American Missionaries and the Remaking of Indian Lives after
the Spanish Influenza Pandemic
Jonathan Chilcote, Florida College

Panel 73: The United States and Right-Wing Dictatorships, a Retrospective:

Promoting Democracy in the Cold War

Panel 76: Beyond State Power: Non-State Actors, Aid, and Development Programs
and the U.S. in the World in the Twentieth Century

Panel 80: Foreign Religions and Foreign Relations: U.S. Engagements with the
World in the Nineteenth Century