We conclude our roundtable review on Kyle Roberts' Evangelical Gotham with a reflection from the author himself. Thanks to everyone who contributed to the conversation, and please do chime in below to continue the dialogue. What a genuine pleasure it has been this week to have four thoughtful scholars of American religion share their journeys through Evangelical Gotham. I can’t think of better traveling companions. I have admired their scholarship and benefited from their conversation over the past decade. As with the best walks through a city, they have allowed me to point out the sites that most interest and excite me and, in return, have shared my enthusiasm, asked for clarification, and drawn my attention to things that I have missed.

This book began as an excuse to get off the Amtrak at Penn Station during my regular commute in graduate school between Boston and Philadelphia. The books that intrigued me the most at that time (and which helped me while away the six-hour train ride) were the new histories of evangelicalism that sought to understand not only what evangelicals did, but why they did it. What would make an enslaved woman join the Moravian Church? How did a slaveholder reconcile his need for independence with the conversion of his wife and slaves? How could a “crazy” itinerant melt hearts?  With notable exceptions, these new histories were often stories of camp meetings in the rural hinterland, of circuit preachers riding to an early grave. What happened to evangelicals when they went to the city?

There were, of course, wonderful books on religion in cities, whether it be Italian Catholic mothers in Harlem or Salvation Army lasses downtown, but these were stories about what the religious did to make their own place in cities that other people had made. What about those who had built the city in the first place? New York certainly did not emerge fully formed. Between 1780 and 1860 settlement raced up Manhattan Island from (what is now) City Hall Park to the base of Central Park. Someone had to do all that building. Certainly, the religious, maybe even evangelicals, played a part? As it turns out, they had quite an influential role. My contention in Evangelical Gotham is that evangelical investment in the spiritual marketplace, church building, cultural production, and moral reform, to give just a few examples, shaped the development of the modernizing city and the experience of life within it. In the process, evangelicalism came to be decidedly shaped by the experience of urban life.

Evangelical ability to turn space into place was key to that strategy, as Lincoln Mullen points out. Reading the work of Henry Glassie, Dell Upton, Bernard Herman, and Robert Blair St. George, I knew that I had to get off the train and take in the urban built environment. How different New York looked from all the maps and illustrations that I had uncovered in the archive! But I couldn’t just look at buildings for their own sake. My reading of the vast trove of surviving evangelical diaries, autobiographies, newspapers, and tracts reminded me of the generative and constitutive role that space plays in nearly every facet of evangelical life. At a crucial moment in my thinking, Tom Tweed’s Crossings and Dwellings helped me to understand the centrality of placemaking to the urban religious.  The places evangelicals inhabited could be real or imaginary. They saw New York through many lens – some sacred, some secular - and, in turn, sought to transform it, often just temporarily, to their own ends. No stable, storefront, or ship’s deck was safe. 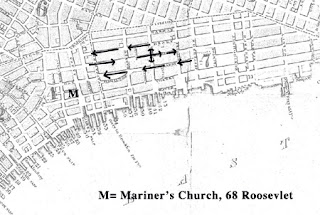 Digital mapping gave me a means to try to make sense of the massive amount of data about place that I was uncovering. Without Google Earth and (later) Google Fusion Tables, it would have been hard to see the patterns in evangelical emplacement strategies that make up the maps in my book. While mapping software is good at conveying some kinds of spatial information, it doesn’t work as well with others. How might I convey Margaret Prior’s conversion experience as the Word wafted on the wings of a breeze out the window of the Methodist meeting house across the adjoining yard to her “unperceived” ear as she sat beneath a shade-tree?  My programming skills weren’t (still aren’t) that good. I hope Monica Mercado will invite me to sit in on her class one day as she and her students follow Prior through the city. I would share my own clumsy attempts at mapping Henry Chase’s journeys in 1821-22 through what is now the Lower East Side when he first became a missionary to mariners. At first, he followed the systematic landscape of the grid, calling at every house up one street and then down another. Within a matter of weeks those carefully laid plans were jettisoned by the demands of the women of the neighborhood who wanted his time and attention. Zipping back and forth from one house to another to offer spiritual and temporal support to these women certainly reminded him that the promise of the linear grid was illusory (and that urban evangelicalism was a women’s religion). As a scholar who chose the medium of a book to tell this story, I strive to demonstrate those journeys of faith through the city in other ways – through text and image. I have, however, deposited all my mapping data with the New York Public Library for those who want to recreate the past journeys of others. 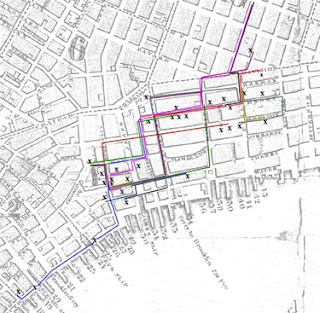 Could Catholics have been contenders for the souls of evangelicals in Gotham’s spiritual marketplace? Christine Croxall asks a great question. By utilizing a broad definition of evangelicalism, I could see a much wider array of actions and strategies in the city’s spiritual marketplace than if I had focused on a single denomination. While evangelicals dominated the city’s spiritual marketplace through mid-century, they were certainly never alone. Some of the scholarship that most interests me these days is by Croxall and Bridget Ford that take seriously the ways in which evangelicals and Catholics fed off each other’s strategies.  That became clear as I looked at how John Hughes approached parish building in the later 1840s. Did that imitation/emulation extend to their beliefs as well? Fear and hatred of Roman Catholicism was deeply engrained in Protestant DNA by this point. Perhaps what the examples of the almshouse residents that Croxall points to tell us less about a battle for doctrinal understandings than for the rich and varied modes of popular religiosity, pulling from Protestant, Catholic, and other belief systems that existed in early national and antebellum New York. Theirs is a world now largely lost to us.

To conclude, I’ve always loved Michel de Certeau’s “Walking in the City” from The Practice of Everyday Life where he reminds us that to truly understand a city, we must go down from the height of steeple to the level of the street. It is in the daily movements and interactions of men and women, the “ordinary practitioners of the city,” that the city is constituted. I fully embraced that idea and spent much time looking closely at what I found down there. Catherine O’Donnell’s comments remind me however of my need to climb back up into the steeple, or better yet, to figure out where John Bornet secured his view of Manhattan in his panoramic birds’ eye view that adorns the cover of my book. John McGreevy, in his comments on the twenty-fifth anniversary of Parish Boundaries published in this blog a few months back, refers to this as the need to remember to come up for aid.  What can I say? Evangelical Gotham is a seductive place! But I wholeheartedly agree that pulling back to see the commonalities across time and space is essential. My journey through Evangelical Gotham has, in some ways, come to an end while it is just beginning for others. Fortunately for me, I am beginning my next journey with the rich reflections of four fellow travelers in my head and my heart.