Mapping the Women of "Evangelical Gotham"

We continue our series on Kyle Roberts' Evangelical Gotham with a post from friend of the blog and assistant professor of history at Colgate University Monica Mercado. Where prior posts honed in on the how cities and spaces fit into Robert's analysis, Mercado highlights the ways in which these concepts both mask and reveal gender.

During the first weeks of my lecture course “Women in the City,” I introduce my undergraduate students to the complex geographies of lower Manhattan, or what the historian Kyle Roberts calls Evangelical Gotham. Sitting in a classroom in upstate New York, our windows facing the hills and valleys that made up the nineteenth century’s infamous “Burned-Over District,” we scrutinize early engravings of Five Points and other images of men and women navigating urban space in antebellum America.

With Evangelical Gotham: Religion and the Making of New York City, 1783-1860, Roberts reminds his readers that late eighteenth and nineteenth-century evangelical Protestantism -- so often understood as the rural camp meeting, a world away from the imagined depravity of the crowded, congested, “godless” city – was actually an urban phenomenon, deeply rooted in changing ideas of space and place. “Evangelicals,” he writes in the book’s Introduction, “positioned themselves well for the spiritual marketplace by rethinking what made space sacred and experimenting with new kinds of religious places.” Those places often lacked a steeple or set of pews -- recognizable markers of religious architecture in the expanding city grid. Instead, Roberts argues, his actors understood the sacred “to come not from the physical space itself but from the actions of believers.” Storefront churches, publishing houses, hospitals and orphanages could be, in Roberts’ words, reclaimed and reformed by men and women with evangelical agendas. (8)


Building on the foundational work of early women’s historians who located in postrevolutionary New York a new cast of characters reforming the city in their image, Roberts weaves the experiences of white evangelical women throughout this argument. [fn 1] In order to understand the world of Evangelical Gotham, Roberts suggests, we must pay careful attention to leaders such as reformer Isabella Marshall Graham -- whose Ladies’ Society for the Relief of Poor Widows with Small Children “transformed how evangelical New Yorkers thought about the women and men outside of their meetinghouses and inspired a rising generation to attempt to convert the city” (52) – and revivalist Phoebe Worrall Palmer, whose ministry embraced not only print and domestic missions, but also a weekly “Tuesday Meeting” for evangelical men and women held not at church, but in her own parlor on Rivington Street.

How might the historian of American religion visualize these spatial and spiritual conquests? In a series of carefully drawn maps of New York churches inserted throughout the text, beginning with 1790 and ending with an expansive 1856 city grid, Roberts marks only formal houses of workshop, and not the experiments with sacred space that are crucial to his narrative, such as Phoebe Palmer’s townhouse or the Ladies’ Society for the Relief of Poor Widows’ meeting rooms. If Evangelical Gotham is to rewrite the antebellum urban spiritual landscape, does the act of mapping obscure the spatial impact of religious women, whose ministries frequently took them outside of the church sanctuary? Evangelical women’s mobility – both real and imagined, in text and image – is nowhere to be seen when we place church addresses on a map. [fn 2] 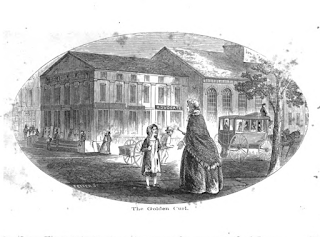 What would a more expansive mapping project look like? In many ways, our historical subjects have laid the groundwork with their extensive publishing operations. In my own research and teaching, for example, I have used the domestic missions of the American Female Moral Reform Society (AFMRS), founded in 1834, as an alternative map of nineteenth-century New York. In their own newspapers, tracts, and memoirs, the women of the AFMRS charted their involvement in new realms of responsibility and geography. My students are captivated by the memorial volume Walks of Usefulness: or, Reminiscences of Mrs. Margaret Prior, a collection of the activities of the Society’s first paid female missionary, who visited thousands of New York families and workplaces every year before her death in 1842. Prior’s vivid descriptions of urban life constitute a significant documentary history of antebellum New York, and the varied experiences of its working poor. Traipsing through “dark, filthy rooms,” “miserable abodes,” and “cold, damp basements,” Prior entered new neighborhoods, homes, prisons, brothels, and factories on a daily basis, determined to repair the degraded conditions of urban life with spiritual and material assistance. [fn 4]

Like many of the other city missionaries Roberts chronicles in his book, Margaret Prior and the AFMRS exhibited an evangelical “mania for quantification. (86) Mobile and “scribbling,” women missionaries like Margaret Prior exemplify the Evangelical Gotham ethos, one that urges historians of American religion to expand our maps of the urban religious landscape. Could a reimagined map help us see how evangelical women missionaries experienced their mobility, and their calling, separate from men? What shape did their paths take – where did these men and women intersect, and where did they meet, outside of the churches? The missionary fervor of nineteenth-century voluntary societies adds new points on the maps of Evangelical Gotham, suggesting the creative possibilities of recentering the act of mapping around women’s movement through New York City. As Roberts writes, “Awakening often involved crossing out of one’s community and into another, which could happen as easily during a walk across the city as a voyage across the ocean.” (22)

[fn 2] Elsewhere, I have argued that evangelical Protestant missionaries and their voluntary societies found reason to portray Protestant women as special conveyors of the word. In tracts, missionary reports, and memoirs, images of evangelical women’s mobility circulated in print across the Protestant world, illustrating battles over religious literacy and women’s influence in nineteenth-century America.