Two Books on Evangelicalism in the Non-Union Era

Why did we see a decline in discussions on unions within evangelical churches in the late twenteith century? How has this decline impacted the beliefs, practices and theologies of evangelical Christians? A number of books have addressed the rise of a new kind of "Christian capitalism" in recent years. These include Tim Gloege's Guaranteed Pure, Bethany Moreton's To Serve God and Walmart, and Ken and Elizabeth Fones-Wolf's Struggle for the Soul of the Postwar South. But, I want to point our attention to two 2016 books which carry on this question particularly well, and which really talk to one another. They would pair very well within a graduate seminar. 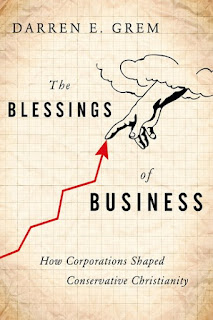 The first, Darren Grem's The Blessings of Business: How Corporations Shaped Conservative Christianity, shows how many companies in the second half of the twentieth century combined their previously separate divisions of "production/sales" and "mission work" within a new product called Christian business. These new corporations advertised themselves as Christian businesses, for they hoped that both employees and consumers would sponsor their corporate mission while also enjoying their products and services. Chick Fil A, for example, advertised its Sunday closures and celebrated traditional families with male breadwinners. Other companies invited employees to voluntary Bible studies and made sure that consumers knew their values. 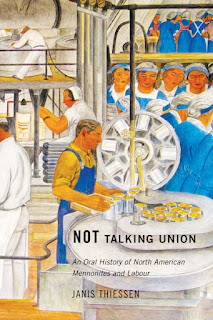 The second, Janis Thiessen's Not Talking Union: An Oral History of North American Mennonites and Labor shows the ways that not-talking about unions has reshaped the theologies and practices of contemporary Mennonites, and led to contemporary tensions among different groups of these evangelicals. The book is a rigorous oral history of Mennonites' theologies of work and God, and does not directly follow change over time. But, it illustrates with exquisite clarity the ways that Mennonite business practices have been affected by the "Christian business culture" which Darren Grem explores.

For example, Grem explores the ways that American businesses have gravitated toward the idea of their own, corporate "freedom of religion" and used this to defend their new Christian brands. Thiessen interviews Mennonites on this topic of religious freedom, and finds that many believed so strongly that their faith harmonizes with their business practices that they saw their religious freedom expressed by undermining unions. Many Mennonites, she finds, used their religiuos freedom to decline union membership, to decline contracts with union laborers, and even to insist as businessmen on their rights to non-union labor.

The failure of previous generations of white, European Mennonites to talk about historic Mennonite support for collective bargaining, Thiessen finds, led to implicit but uninterrogated assumptions. For, Thiessen observes, while new generations of Mexican American Mennonites saw unions as consistent with Mennonite values of non-violence and non-resistance, many white European Mennonites (in the US and Canada) saw unions as inconvenient, unnecessary, and even an imposition on their religious freedom as business owners.

For, where Grem finds that many companies in the postwar era thrived on selling to their employees the sense that they were not just working for a business but working for a larger, Christian mission, Thiessen emphasizes that this financial thriving came at a cost. Thiessen interviews Mennonites who worked for Mennonite companies and found that a number such employees were disenchanted with the ways that their employer did not attest to the Christian values they believed a Christian employer should practice.

Because Thiessen conducts oral histories with individuals and asks them questions on their personal faith, her book allows us a rare glimpse into how "Christian business" cultures have not only impacted Christian communities but also personal beliefs about God and the Church. Thiessen finds that business success, combined with the gag rule on discussing unions within many Mennonite communities, has led to some degree of community brokenness and spiritual disenchantment. It has created deep rifts among Mennonites (which often overlap with racial divisions) and undermined Mennonite hopes of uniting around historic values of non-resistance.

If I were teaching a graduate course on American Religious History or Religion and American Business, I'd probably do two weeks on business and religion in the late twentieth century. The first would include readings by Moreton, Gloege and Grem on the rise of "Christian business" and its appeal in the postwar South. How did conservative evangelicalism build such close relationships with business entrepreneurs? Why did the Sunbelt South provide such a ready environment for the prosperity of a certain kind of evangelicalism and business cultures?

The next week would include readings by Fones-Wolf and Thiessen on the use "religious freedom" and even Southern evangelicalism itself to reject unionization. Why did unions fail to harness the culture of business in the postwar North America? Why did Southern evangelicals (and not, say--Catholics or Mennonites) come to define business practices for white Protestantism in North America? How (as Thiessen asks) did this shift toward "Christian business" shift Christians' understandings of God and the best practices of free enterprise for practicing Christians?

As I have suggested in reviews on these books, we need more research on Christian business outside the postwar South (and outside of evangelicalism). We need more research on Catholic and liberal Protestant and Jewish business ethics--in New York and Chicago and California and the Wild West. We need more attention to the competing theologies of business and unionization at work in the 1950s and 1960s. But, the conversation our colleagues have started here is really very important and ought to be widely studied in college classrooms.
Email Post
Labels: evangelcalism evangelicals and business janine's posts religion and business religion and labor

Joe Gio said…
Do you think that the human work ethic is rooted in primitive sun-god and nature-worship religion? Whereunder people might have thought that god provided available food, if they worked for it? Hunted, gathered, and later farmed?
January 10, 2017 at 6:22 AM

Janine Giordano Drake said…
I don't know where the human work ethic comes from. Unionization does not derive, in my estimation, from a failure of the human work ethic. Rather, it grows out of the desire among employees for a collective voice to negotiate pay, benefits, and working conditions with employers.
January 10, 2017 at 3:11 PM