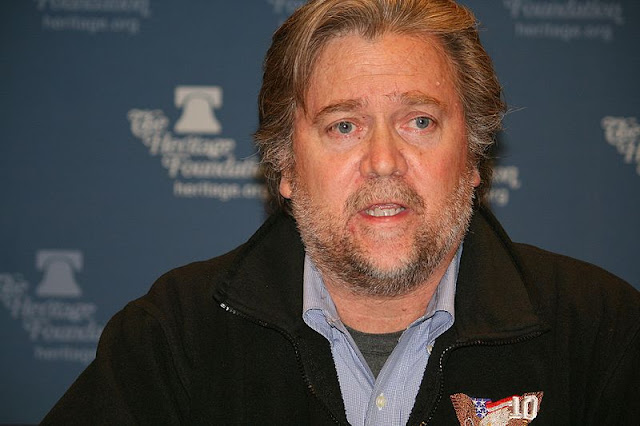 Recent news reports indicate that Steve Bannon, formerly the Executive Chair of Breitbart News and currently Chief Strategist and Senior Counselor to President Trump, will join the National Security Council’s Principals Committee. There’s a lot to be said about Bannon and his relationship to Jews, Muslims, women, and other racial and religious minorities. But there is also a surprising lack of information about Bannon given his new prominence. That may be in part because, as Bloomberg’s Joshua Green notes in a fascinating long-read, Bannon’s life has been “a succession of Gatsbyish reinventions.” (Side note: I encourage you to read Green’s piece—written when Hillary Clinton and Jeb Bush were still the presidential frontrunners—and remind yourself that its subject now has a permanent seat at one of the most select meetings in DC alongside the Secretaries of State and Defense.)

A permanent seat on the NSC’s Principals Committee is a striking promotion, even by Gatsby’s standards. Though it’s been overshadowed by the roll-out of new policies targeting Muslims and refugees, Bannon’s new role is worth reflecting upon. Bannon has had Trump’s ear for a while now, too. Understanding the administration might mean understanding Bannon.

Most news coverage portrays Bannon as a strange fit for the NSC. He is viewed as an outlier because he has not been employed by traditional foreign policy institutions: the Department of State, the CIA, NGOs, etc. Even so, for many critics it is less his résumé than his ideas that are cause for concern. Yet I think it is a mistake to view Bannon as entirely alien to the national security complex. Bannon’s ideas about the relationship between race, religion, and national security make him an important public intellectual for this new moment in American national security policy.

The NSC—and American national security policy—has always been political. Decisions about what constitutes a threat to US security, and appropriate responses to it, are inescapably political questions. Shortly after its creation under President Truman, National Security Council Report 68 [1950] (often abbreviated to NSC-68) called for a spiritual “counter-force” to challenge the “fanatic faith” of the Soviet Union. Like the Cold Warriors of years past, Bannon has a remarkably well-defined worldview through which he perceives specific threats to, and values of, the United States. National security policy in the United States has long been in conversation with (and, at least since the Cold War, dependent upon) such a narrative. Given Bannon’s prominence, it’s worth considering how he sees the world, and how these narratives might influence how he thinks about national security.

Buzzfeed recently published the transcript of a talk Bannon gave in 2014, when he Skyped into a conference hosted by the Human Dignity Institute at the Vatican (video of the talk can be found here.) The talk is notable in that it appears to be one of the few times where Bannon has explained his worldview at length.

So what is Bannon’s narrative? How does Bannon see the religious history of the United States, and of the West? According to Bannon, both (a) capitalism and (b) the “Judeo-Christian West” are in crisis, and these crises are related. While he’s vague on specifics, consider Bannon’s narrative of the last hundred years or so, which looks something like this:

Americans first saw the fruits of enlightened capitalism in the twentieth century because capitalism was fully informed by “the Judeo-Christian tradition.” This kind of capitalism is one in which people ask themselves:

But in recent years Americans have endangered themselves by moving away from this system. Increasingly, we tolerate two flawed forms of capitalism: (1) state-sponsored capitalism (think China or Russia) or (2) what Bannon terms “Ayn Rand capitalism” that seeks to make people into commodities. This latter form is especially dangerous since it seduces young people with promises of personal freedom. However, the price of these juicy promises of personal freedom is the “immense secularization” of the West. These factors converge to make American culture--and Western governments--peculiarly unable to meet the challenge posed by “jihadist Islamic fascism.” Endemic to Africa and Asia, Bannon sees this as today's defining national security challenge:


And we’re at the very beginning stages of a very brutal and bloody conflict, of which if the people in this room, the people in the church, do not bind together and really form what I feel is an aspect of the church militant, to really be able to not just stand with our beliefs, but to fight for our beliefs against this new barbarity that’s starting, that will completely eradicate everything that we’ve been bequeathed over the last 2,000, 2,500 years.

But there is a domestic aspect here, too. Bannon’s time at Goldman Sachs taught him that the working class is being dictated to by “the party of Davos,” made up of “people in New York that feel closer to people in London and in Berlin than they do to people in Kansas and in Colorado.” Bannon sees fellow critics of this system around the globe: UKIP & Nigel Farage in the UK, Modi in India, Trump in the USA. In this view, the populist revolt against establishment figures (whether Republican or Democrat) is because these leaders have so poorly managed the spiritual resources of capitalism. As a result, Americans have been left economically and militarily defenseless against “jihadist Islamic fascism.”

During the Q&A, Bannon repeatedly explains that American and European populist groups that stoke racial and ethnic animus do so because they have not seen their share of capitalism’s benefits. He argues that, by identifying with their economic concerns, the “global tea party” can generate support from these groups while isolating those with racially problematic views:


Look, we believe — strongly — that there is a global tea party movement. We’ve seen that. We were the first group to get in and start reporting on things like UKIP and Front National and other center right. With all the baggage that those groups bring — and trust me, a lot of them bring a lot of baggage, both ethnically and racially — but we think that will all be worked through with time.

One way to think about “national security” is how a nation-state understands the relationship between its safety and how it is constituted. In Bannon's view, both the security and economy of the United States require an appreciation of “Judeo-Christian capitalism.” If certain kinds of people are essentially incompatible with the American system, it becomes a matter of national security to keep them out. 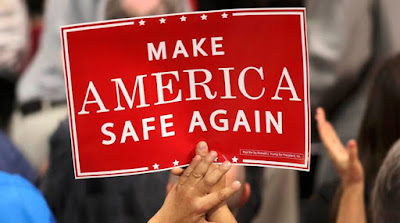 This is, in short, the logic of "Make America Safe Again." In Bannon’s view, America is only as safe as it is benevolently capitalist and Judeo-Christian. This national security framework helps to make sense of a variety of the campaign’s positions and administration actions, from the economic and racial protectionism of “the wall,” to the insults lobbed at the Khan family, to President Trump’s “extreme vetting.” In its completeness, it echoes the full-spectrum Cold War narratives that understood American national security to be inseparable from its economic, religious, and racial composition.

These national security narratives are never far removed from historical ones. Think about the apocalyptic Cold War struggle between freedom and atheism or the view, of some, that the war on terrorism is really a battle between the freedom-loving West and the freedom-hating East (“They hate us because of our freedoms”). So while these narratives aren't new, they do suggest that we should pay attention to what Bannon’s motivating narratives are, since they will shape the national security policies he will pursue.

Invenit Mundo said…
You have a very nice blog, I really really like it. I have followed you on Twitter and subscribed. I also a have a very interesting blog about History, Science, Nature, and more...If you want to see it please vizit invenitmundo.blogspot.com