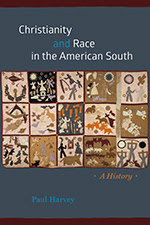 Even as the AHA and ASCH meetings are kicking off--and don't forget Cara's handy guide below--it seemed fitting to notice our blogmeister (emeritus) Paul Harvey's double publication of Christianity and Race in the American South and Bounds of Their Habitation: Race and Religion in American History.

Earlier this week, Paul showed up on the Research on Religion Podcast. Tony Gill runs a great podcast for all kinds of scholars of religion, and he conducted an effective interview on Christianity and Race in the American South.

In the podcast, I was particularly taken with two ideas. One was Paul's goal to historicize evangelicalism in the South and place it within larger historical frames. The other was the discussion of the westward expansion under Manifest Destiny (with displacement of natives and expansion of the slave system) as an expression of one religious vision coming into competition and conflict with another. That is, just as some varieties of white evangelicals were justifying expansion through religious language, they were being challenged by other evangelicals demanding more justice, also from biblically-inspired perspectives. 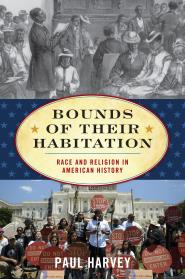 Then, if you were looking for a shorter introduction, Paul also just showed up in "The Author's Corner" at the Way of Improvement.

For those in Denver, I understand Bounds of Their Habitation is available at the Rowman & Littlefield booth.

Altogether, I think Paul has given us a lot to chew on in the new year.