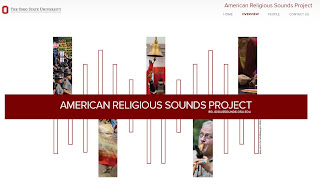 Two years ago, David Stowe posted here about the launch of the Religious Soundmap Project of the Global Midwest, which sought to capture the sounds of diverse religious practice in the Midwest and share them via a digital platform. As the project website notes, Isaac Weiner of the Ohio State University and Amy DeRogatis of Michigan State University began the project in May 2014. Student researchers made field recordings of "'canonical' [religious] sounds like Islamic prayer calls or Buddhist chanting" as well as "'non-canonical' sounds in homes and workplaces, during public festivals, ambient noises, and in ostensibly 'secular' gatherings such as school graduations or football games," then created a digital soundmap of these recordings for the public to explore. In this way, Weiner and DeRogatis sought "not to resolve definitively what counts as religious sound, but to present varied sounds that might invite new ways of thinking about religion in the Midwest."

This pilot program proved tremendously successful, and Weiner and DeRogatis have built on this success with the creation of a new, expanded digital religion project that should be of great interest to the readers of this blog: the American Religious Sounds Project. Similar to the Religious Soundmap Project of the Global Midwest, the American Religious Sounds Project will involve students and researchers capturing high-quality audio recordings of diverse religious practices and the creation of a digital archive to preserve and share these recordings. This new project has a national rather than regional scope though, and Weiner and DeRogatis report that their ultimate goal is to "construct a digital platform that integrates sound, images, and text to offer new insights into the complex dynamics of American religious pluralism."

According to the site, the following questions animate the project: "What does religion in the United States sound like? Where should one go to hear it? How might we understand religious diversity differently if we begin by listening for it?" These are compelling questions. As an archive, the project will certainly be of great value to future historians, but the project also obviously holds tremendous pedagogical potential for those who are currently offering courses in American religion and religious history.

For this reason, this project will be an exciting one to track, and Weiner and DeRogatis have created a blog just for that purpose. In keeping with the current holiday season, their post from December 21st highlights the sounds of a diverse array of secular and religious celebrations, from a Pagan Krampus parade to a Christmas tree lighting ceremony.