Which One Is "The Speech"? 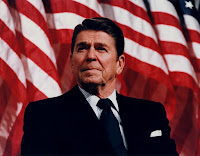 As I tried to lecture about 1980s conservatism on Tuesday, I admitted to my students that I no longer knew what to say about it. Before the election, I had a narrative that worked. After the election, I didn't. As just one small symptom of my distress, I spent the minutes before class madly googling Reagan speeches that I'd never paid much attention to before.

In my old narrative--shaped, no doubt, by the fact that I received my degree from a religion department rather than a history department--Reagan's key speech was his National Affairs Briefing in Dallas on August 22, 1980, where he famously told an audience of conservative evangelicals that he endorsed them. You can find a video and abridged text here, the pre-circulated text (which lacks the endorsement line) here, and an article by Steven P. Miller that emphasizes the importance of the speech here. It's still a big speech, but its celebration of "traditional Judeo-Christian values" seemed completely out of step with the GOP candidate in 2016, which made me wonder if a different narrative, starting with a different speech, would have more explanatory power.

The speech commonly labeled "the speech" came much earlier, in 1964, when Reagan emerged on the political scene to boost Barry Goldwater. My working knowledge of the Goldwater phenomenon is, idiosyncratically, rooted in a book I absolutely love assigning in undergraduate survey courses, Jackie Robinson's autobiography I Never Had It Made. In chapter 15, "On Being Black Among the Republicans," Robinson described the 1964 GOP convention--which was not, contrary to popular belief, the site of Reagan's famous speech--as "one of the most unforgettable and frightening experiences of my life. ... A new breed of Republicans had taken over the GOP. As I watched this steamroller operation in San Francisco, I had a better understanding of how it must have felt to be a Jew in Hitler's Germany" (p. 169 of the 1995 ecco edition).

Based on this reading, I looked back at "the speech," also known as "A Time for Choosing," expecting to find evidence of the horror Robinson recounted. I didn't find it. The speech was a clarion call for small government, complete with economic numbers and gratuitous digs at the "schemes of the do-gooders," but it had no obvious connection to the scenes Robinson recounted at the convention, where a white Southern delegate threw acid on a black delegate's jacket and set it on fire, and another white delegate nearly got in a fistfight with Robinson. Besides, Reagan's own presidential record showed that, while small government remained (and remains) a crucial aspect of conservative rhetoric, Republican leaders have never managed to make much of a dent in the size of the government, and their constituents have repeatedly excused this failure. "A Time for Choosing" anchors a narrative about Reagan and conservatism, but not one I found especially compelling, if the people supposedly so passionate about it have so frequently ignored it.

I ended up bringing before my class a different speech, the Neshoba County Fair "states' rights" speech of August 3, 1980. I found this speech (video and transcript here) useful less for its content--it's more folksy than forceful--than for the way it shows (1) how political dog whistles work, and (2) why interpretations of history matter. In 2007--27 years after the event!--David Brooks wrote for the New York Times that Reagan was falsely accused of racism on the basis of this speech. Four days later, Bob Herbert wrote for the same paper that the speech was absolutely evidence of racism, and to argue otherwise was "woefully wrong-headed." I read my students portions of both NYT columns and asked, how might both of these perspectives contain elements of truth, and why is an inability to agree on what constitutes racism a huge problem? (Incidentally, my favorite piece on that last question also comes from the NYT, "The Easiest Way to Get Rid of Racism? Just Redefine It.")

One landmark Reagan speech I didn't go over in class was 1987's "Tear Down This Wall." The irony was so thick, I choked on it.