Fighting has deeply human roots, think some. Instinct, competition, aggression, evolution, and all that. And, think some, those roots have been divinely planted. In our DNA, God bequeathed us bellicose proclivities. The teleology of a closed fist. For the faithful, so goes the logic, fighting reveals our Created-ness. A long-time voice in the wilderness crying out said logic is Mark Driscoll. Much more than words, however, Driscoll loved a good scrap. Here's a brief rundown of his past bouts, and his present fighting condition.

The founding of Mars Hill was conducted "in the Spirit of Fight Club," William Wallace II (a.k.a. Mark Driscoll) wrote in the winter of 2000. Clearly enamored by the recent release of Fight Club, Driscoll labeled his emergent church mission "Operation Backlash." By then, he had gathered his space monkeys and established an administration, purchased a location, and drafted the church rules. The Operation's purpose was singular: to remedy the "pussified nation" that we all live in, comprised of men "raised by bitter penis envying burned feministed single mothers who make sure that Johnny grows up to be a very nice woman who sits down to pee." Indeed, Mars Hill/Fight Club was a much needed solution to the sit-style peeing pandemic of the late-90s. 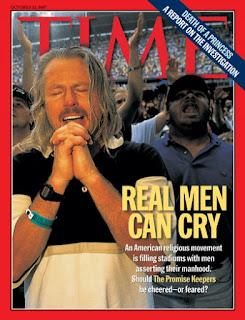 Driscoll and his followers sought to cultivate their "inner Fight Club" as revolutionary counterpoint to the Dawson's-Creek watching, emotion-talking, crying "homo Promise Keepers" that pervaded American culture. Titillated by the thought of a forthcoming 21st century crusade, Mars Hill members rallied. For the lost, a "Rev. Tyler Durden" zealously theologized, "the most graceful thing we can do for them is tell them they are pussified and we will continue to beat their ass until they stop." A Carlisle of a different sort. Beat the man, save the soul. Driscoll puffed:


I love to fight. It's good to fight. Fighting is what we used to do before we all became pussified. Fighting is a lost art form. Fighting is cheaper than medication and more effective than counseling. Fighting always wins over compromise.

American culture had recklessly disregarded manly, human fundamentals. Alas, there was no outlet, no venue for the appropriate, godly expression of masculinity. Churchmen could not kick the asses that they so piously sought to kick. Robbed of beneficial beatings, American youths were lost and listless. They were strangers to pain, to reality, to human nature. They knew only pleasure, cultural artifice, and sentimentality.

While present in "most cultures throughout human history," Driscoll lamented, "rites of passage" were here lacking. But not in Mars Hill/Fight Club. Fighting was (and could be) instrumental. A Mars Hill men's community home resident promoted their theologically scrappy method. "We made a court of appeals to all confrontations," he claimed, "two pairs of boxing gloves." In that Mars Hill men's home, soft boys entered and hard men left. Driscoll himself was therein hardened. He and his housemates "bought gloves, headgear, and mouthpieces and began our own redeemed Fight Club," Driscoll said. Fist-to-cuffs were the Mars Hill way. For such was the Kingdom. 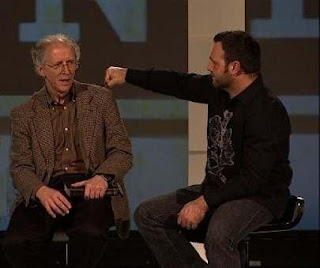 But, as we all now know, it was a Kingdom divided. Driscoll preached about it in 2007. Enraged that people sometimes didn't do what he told them to do--even members of his own church--Driscoll looked to the Scriptures. He directed his congregation to a Bible passage where a "pastor" was "beating up" some of the more recalcitrant members of his "church." Driscoll's inner Fight Club liked it. Simpler times. Purer ways. A no-holds-bared Mayberry. He would have fared well under such circumstances, he postured. Durden Driscoll expounded, "There's a few guys right now, that if I wasn't going to end up on CNN, I would go Old Testament on 'em. Even in leadership in this church." Truly, in a perfect world with "no attorneys and blogging," "busting" people in the nose would be ideal. America was just not yet perfect enough. Someday, again, perhaps.

In a fallen culture where attorneys and bloggers exist, however, Mars Hill was not to be. But fighters never quit. Mark Driscoll has seized another opportunity, founding The Trinity Church in Scottsdale, Arizona. Things seem different now though. Sleuthing reveals no founding father Spirit of Fight Club. No pussified Arizonians have been threatened. Boxing gloves have settled no theological disputes. Driscoll spends his days preaching about vacation tips for dads, how to be a better friend, and the best ways to take a nap. The "Cussing Pastor" has even cleaned up his language. Docile Driscoll. Now 45 years old, he may have spent his youthful pluck. An aged lion sunning on the green golf-course plains of Phoenix's Club Retiree.

"My angry young prophet days are over," Driscoll told Mars Hill just before he resigned in 2014. Maybe. Or maybe his inner Fight Club is still inner. Lurking. The Trinity Church might not be another evangelical experiment in male agression. But stay tuned.