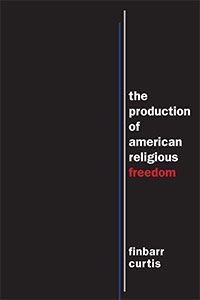 Finbarr Curtis’s The Production of American Religious Freedom doesn’t offer a comprehensive introduction to the conception and importance of religious freedom in U.S. history. It doesn’t outline a straightforward historical genealogy of the concept of American religious freedom. Curtis doesn’t propose suggestions for how we might best define “American” or “religious” or “freedom.” The case studies that he presents—nodes in a complex web that transcend time, space, points of view, and specific social concerns—are themselves impossible to neatly tie together. Yet the book does offer a compelling contribution to the conversation about religious freedom in America, a contribution that uniquely highlights economic structures and concerns, notions of personhood, aesthetic and affective works and workings, and ideas about private property and public good. Furthermore, The Production of American Religious Freedom—with its analysis of data at the micro and macro levels and its focus on how particular beliefs structure actors’ engagements with others—exemplifies the unique type of interdisciplinary research that is possible within the field of religious studies.

As the title suggests, Curtis is concerned with the economy of religious freedom. Curtis employs the term economy in a broad sense; in addition to addressing labor, the privatization of religions, and corporate religiosity, he addresses “institutional forces that define, produce, and distribute contested social resources in American life.” Ultimately, he is interested in how an economy “produces persons who make choices about how to govern themselves.” Curtis is particularly concerned with self-governance as well as “resistance to dominant forms of governance.” Curtis’s subjects jostle for religious capital and authority, creating and asserting their values and visions of society and reacting to others who challenge their positions. Curtis seeks to “measure this push and pull, the contests over the production and distribution of power” (3). Some of this push and pull does take place in the courts, and Curtis is interested in political debates and the legal ramifications of court decisions on religious freedom issues. Hence, his last two chapters focus on recent political issues. One considers the teaching of Intelligent Design in public schools, and the other looks at the Hobby Lobby case, which concerned corporations’ refusal to pay for employees’ contraceptives. Curtis is also interested in political leaders whose seemingly contradictory perspectives raise questions about the entanglement between religion and politics. One chapter focuses on William Jennings Bryan, whom many historians praise for his populism but criticize for his anti-evolutionism. He also considers Al Smith, the four-term Catholic governor of New York and 1918 Democratic nominee for president who was both the product of, and a challenger to, political establishments.

But Curtis’s case studies take us beyond the realm of politics. Two of his case studies consider significant religious leaders. First, Curtis considers preacher Charles Grandison Finney, who is often associated with the Second Great Awakening. Second, he considers Malcolm X, known for his involvement in the Nation of Islam and his outspoken criticism of structural racism and the liberals whose policies perpetuated it. In addition, two of Curtis’s case studies examine producers of artistic works whose moral commitments permeated their art. First, he looks at Louisa May Alcott, whose 1873 novel Work offered a vision of personhood that was intimately tied to labor and social relationships. Curtis also discusses filmmaker D. W. Griffith, who argued that his 1915 film The Birth of a Nation—which the American Civil Liberties Union condemned for its racist depictions of African Americans and which led to the re-emergence of the Ku Klux Klan—accurately depicted the victimization of Southern whites at the hands of African Americans and white Northerners.

Because these chapters cover many different times, regions, and themes, it is difficult to offer a succinct summary of what they offer, taken together. Yet in each chapter, readers are challenged to consider—at different moments and in different contexts—ways that social economies produce ideas about the limits and beneficiaries of religious freedom. Each chapter offers a nuanced look at a significant issue, challenging simplistic interpretations of how actors and events fit into a timeline of American religious history. This approach encourages readers to think deeply about the tensions in each case study. Throughout the book Curtis, draws on a technique similar to characterization—a literary device that illuminates characters by describing what they do, say, and how they relate to others—in his detailed descriptions of actors, texts, and debates. At times this was jarring; when discussing Griffith’s defense of his film, for example, Curtis presses readers to reckon with the filmmaker’s racialized ideas. While unsettling in this case, this technique forces readers to confront the various ways logics of religious freedom have operated. In addition to these literary techniques, a subtle wryness enlivens Curtis’s analysis, and an earnest conviction in the seriousness of the debates he describes is evident throughout the book.

There were two things about the book that left me wanting (and then had me questioning this wanting). At times I thought a bit more historical narrative could have been helpful to frame the significance of each chapter. While I thought that the key ideas that each chapter brought up were compelling, I would have liked a bit more explanation for why Curtis chose these particular case studies. However, he does specifically note that there is no one unifying theme that ties all of his chapters together, simply because it is impossible. “Religious freedom,” he argues, “adapts and shifts to different circumstances as it is exercised by different kinds of persons” (164). The examples he chooses demonstrate that the concept of religious freedom is quite malleable, which justifiably challenges our attempts to neatly assess it.

The book is an important contribution to scholarship on religious freedom and American religious history, and scholars of religion, law, politics, economy, and ethics should find it useful. In general, the chapters do assume the reader’s general knowledge of the figures and historical contexts; for this reason, the text is likely be too advanced for those beginning their studies of American religious history or religious freedom. That being said, I think that the book offers an engaging set of topics for students to discuss, even at the undergraduate level, and I think that it could spark rich conversations in the classroom. Having taught multiple iterations of a course entitled Religious Freedom and Discrimination, I can envision assigning chapters from Curtis’s book interspersed with other texts that offer more historical context. These could include Sehat’s book, John Corrigan and Lynn Neal’s Religious Intolerance in America: A Documentary History, and/or  Peter Gottschalk’s American Heretics: Catholics, Jews, Muslims, and the History of Religious Intolerance, all of which of which I have used in my courses.

Overall, this book is a provocative contribution to discourse on American religious freedom. I look forward to conversations that the book generates, and I appreciate the example it sets for unique, interdisciplinary studies within the field of religious studies.