A Dialogue with Heath Carter on "Union Made" 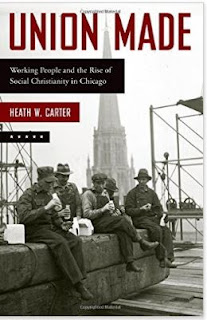 Last month, I reflected on some similarities and differences between two recent books on the Social Gospel: Heath Carter's Union Made and Ed O'Donnell's Henry George and the Crisis of Inequality. You can find that essay here.

I invited Carter to respond to my reflections. Thank you, Heath! (Heath and I known each other a while and he has always been a very gracious and thoughtful colleague.) His response below illustrates this yet again, with my reflections following.

Thank you for this very thoughtful review, which puts my book into conversation with Ed O'Donnell's specifically around the question of whether the Social Gospel proved, at the end of the day, empowering for workers.  I should say up front that I am very excited to see how your much-anticipated book will add to this important conversation.

You argue that there is a tension in the stories O'Donnell and I tell insofar as it seems that, in NYC, the leveling movement that coalesced around Henry George was soon thwarted, whereas I contend that in early-twentieth century Chicago a working-class gospel was ascendant.  You go on to tie these differences of outcome and interpretation to the fact that a) we're writing about different cities and b) we're focused on different populations within the broader working class.  I think those are key factors: so key in fact, that I think if we follow them all the way through, we'll see that the stories O'Donnell and I tell are actually mutually reinforcing rather than conflictual.

Allow me to explain what I mean.  While you write that I see "the Social Gospel as a generative, empowering, working class movement in early twentieth century Chicago," I would actually put it somewhat differently.  Part of what I do in the book is recover the competing working-class Christianities that flourished in Gilded Age Chicago.  In the early chapters I discuss the moderate, reforming brand propounded by the likes of Andrew Cameron, as well as more radical strands articulated by some believing Knights of Labor, not to mention anarchists such as Albert Parsons, who was not a professing Christian but who was nevertheless deeply interested in the figure of Jesus (for reasons Dave Burns has masterfully recovered).  But in addition to describing a variety of working-class dissenting theologies, I'm also trying to underscore the pivotal role some working people played in a key historical development: namely, the rise of pro-labor gospels within churchly institutions in the early 20th century.  On this latter front, the activism of the AFL's "labor aristocrats" proved especially momentous, mainly because these respectable craftsmen represented the segment of the working classes that was most acceptable to Protestant and Catholic church leaders, who throughout those years were gripped by a crisis of working-class attrition. For these AFL leaders, the Social Gospel as it came to be realized in the churches would seem "generative" and "empowering."  But for Protestant radicals and even for less-skilled Catholic workers - who were so often protesting in the streets of late-19th century Chicago but whose theological perspectives are so difficult to recover - this same Social Gospel might have seemed still, on the whole, oppressive.

This is what I mean when I write, in the introduction to Union Made, "The middle-class Social Gospel was, in this and every sense, a real but distinctly moderate accommodation of working-class religious dissent."  And this is why I think that, at the end of the day, perhaps, my book and O'Donnell's may actually line up on the same side of the crucial question you've raised.

I fully agree with Heath that the two books are not conflicting at their very core. In fact, this is exactly what I find most striking about the contrast between the books. This movement which was at once empowering to Protestant AFL labor aristocrats also aimed to supppress socialists, Catholics, labor radicals, and others. My point in the essay was not to critique the analytical framework of either book. Rather, my point was that the way we describe the relationship between "The Social Gospel" and "the working classes" needs to be tempered by the detail that both Carter and O'Donnell provide us. To the extent that they refer to two different working classes, we ought to be wary of the fact that there are a number of different groups calling themselves "working classes" in the Gilded Age. I sought to observe that the collapsing of the categories of skilled and unskilled workers was--perhaps--a rhetorical tool used by American Federation of Labor and other conservative trade unionists to further their political aims. We need to be wary of why our subjects choose to identify themselves by the terms they use, and we need to be ready to critique those categories where necessary.

Carter describes the Social Gospel forged by trade union aristocrats as "a distinctly moderate accomodation of working class dissent." In his narrative, the pro-labor gospel of white, skilled laborers was heard by ministers and used within their campaign for "Social Christianity." I find this description accurate but its emphasis a bit misleading. While the rise of Social Christianity surely accomodated some aspects of working class dissent, it also solidly rejected a much larger--and much louder--element of working class dissent. Moreover, where Carter sees conservative trade unionists inspiring their ministers, I see ministers and their upwardly mobile flock of Anglo Protestants together building nativist and white supremacist ideologies of labor in order to stand apart from the radical labor movement. We might describe this as a "moderate accomodation." But, the Marxist in me can't help but point out that appears to be a classic example of bourgeois ideology fragmenting and suppressing the working classes. I will always support historians' efforts to acknowledge workers' agency, but I wonder to what extent craftsmen in this instance exercised their agency more through supporting bourgeois ideas than coming up with any of their own.

Carter's research is impeccable beyond question. My questions here are not regarding what he finds but whether we might read more into the conclusions that he reaches. Surely, ministers and Anglo-Protestant craftsmen collaborated a good deal in the Gilded Age. Yet, what happens when we read these relationships from the other end, and emphasize the fact that Protestant miniters in the Gilded Age were bathed in Josiah Strong, Teddy Roosevelt, and other white supremacist boosters?

First, what should we take from Carter's observation that a pro-labor gospel arose at Chicago Methodist church amidst a rise in worker radicalism and fears that this might overtake the city. Carter writes, "The applause at Ada Street Methodist betokened hope that the city's Anglo-Protestant peoples might hang together, even as mounting class conflict threatened to pull them apart" (71). Carter emphasizes the ways that craftsmen and ministers come together through this experience, and that relationships like this one fostered the "moderate accomodation of working class dissent" which he describes. However, why doesn't Carter read this hardening of Anglo-Protestant alliances in the face of increased racial and ethnic diversity as evidence of working class nativism? Why doesn't he read this hardening of conservative, Anglo-Protestant theologies in the midst of radical socialists, including Christian Socialists, as evidence of working class conservatism? Why don't we conclude from this story that the Social Gospel was born of racism, nativism, and an effort of skilled, white craftsmen to distance themselves theologically from the Christianities of the poor?

Second, how ought we interpret widespread Gilded Age denunciations of churches as havens of mammon, alongside commentary on how Jesus would hardly recognize them as legitimate houses of worship? Carter sees these critiques as the earliest evidence of a working class movement for Social Christianity. For, he sees the real possiblity of a "rapprochement" between Protestant elites and the Central Labor Union within Chicago (101-102). However, Dave Burns reads very similar evidence of church critique as part and parcel of a widespread rebellion of skilled as well as unskilled workers against all the denominational Protestant and Catholic churches in the United States. As Burns illustrates, radicals, agnostics, atheists, and many others with heterodox religious beliefs defected Protestant churches in large numbers during the Gilded Age. As others have emphasized, the Gilded Age was an era of great religious invention, especially by poor and working classes. By virtue of this massive rebellion, the Protestant craftsmen that were left in Chicago denominational churches during the Gilded Age were a select few of relatively conservative Anglo-Protestants. We are probably right to still identify these folks like Andrew Cameron as working class. After all, many of them (excepting perhaps Cameron himself) worked primarily with their hands. But, are these craftsmen representative of the Chicago working classes? I'm not sure that they are. Surely, many were union members. But, they also distanced themselves from members of other types of (radical) unions. They worked closely with the same Protestant minsters who, as Carter shows, were not very popular with the public because of their nativism. Should we really conclude that the Social Gospel was "union made"?

After reading Carter's book, it is hard not to conclude that while the Social Gospel was a "distinctly moderate accomodation of working class dissent," it was also an effort to solidify white Protestant power over the masses of unskilled laborers. Trade union aristocrats may have identified themselves as working classes in order to distinguish themselves from the doctors, lawyers, engineers, clerks, and businessmen that populated Protestant denominational churches of the Gilded Age. But, their political and theological agenda clearly sought to crush radical Christianities within the Knights of Labor and the Socialist Party  (and later, the Industrial Workers of the World). While these highly skilled, white laborers probably did see themselves as moderate, they were moderate only on a spectrum of Gilded Age, Anglo Protestant churchgoers. Some Anglo Protestant churchgoers were socialist radicals. Some believed in the Gospel of Wealth. Carter's working class authors of Social Christianity saw themselves purveyors of nineteenth century producerist ideology--the same ideology that was used to defend farmers against farm hands and sharecroppers. These artistans may have been trade unionists, but they seem to me much better described as Anglo-Protestant conservatives.
Email Post
Labels: Heath's posts janine's posts religion and labor social gospel

Anonymous said…
15 years ago when I took my first graduate seminar in the Gilded Age and Progressive Era there was hardly anything I could find in the secondary literature that drew attention to the major themes of working-class transformations and religion/the Social Gospel. Thank you all for providing these great books, articles, and blog forums!
September 12, 2016 at 10:49 AM

Anonymous said…
15 years ago when I took my first graduate seminar in the Gilded Age and Progressive Era there was hardly anything I could find in the secondary literature that drew attention to the major themes of working-class transformations and religion/the Social Gospel. Thank you all for providing these great books, articles, and blog forums! - Ed Blum
September 12, 2016 at 10:56 AM

Janine Giordano Drake said…
And thank you, Ed, for energizing this conversation. I'm not sure we'd be having these conversation without _Reforging the White Republic_!
September 12, 2016 at 3:20 PM

Heath said…
Yes, thanks so much, Ed! And thanks again to you, Janine, for sparking this conversation. You're raising big questions about the framing of not just my book but also of labor and religious history more broadly in the period under discussion. I'm excited for your book's intervention into these conversations and also hoping for review essays that will step back and begin to make sense of the rapidly changing terrain in the study of Christianity and capitalism in the modern US.
September 13, 2016 at 9:46 AM