Boxing and the YMCA War Dogs 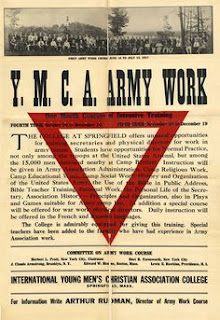 As a long-time champion of physical health and moral goodness, the YMCA easily found national purpose in the First Great War. It was all but destined. A newly tasked "arm of the Federal Service" by "executive order of the President," the Y became "militarized." Apropos, the Y forged deadly assassins in its religious furnace. Charged with the vital task of keeping the American Expeditionary Forces in shape, the Y not only sought to build character, but to train efficient and effective killers. Here's a brief tale of how they did it.

For the Y (and therefore for the American Expeditionary Forces), boxing and hand-to-hand fighting was the chief instrument of entertainment, death, character-building, and international unity. 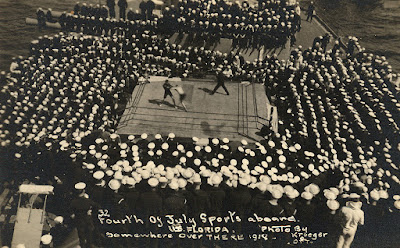 The YMCA taught bellicose multitudes to like boxing. And taught them them how to box. Less than a year and a half after official American involvement in the War, the Chairman of the US Army's Athletic Division noted that boxing was a "regular and definite part of the daily routine" in "many of the principle camps." Brigades, battalions, companies, and platoons enrolled boxing instructors through the Y to instruct their men on the sweet science. Numerous military camps had boxing schools for the creation of boxing instructors. For the A.F. in G. there was a "weekly Y fight show." Under the auspices of the Y, companies and camps routinely put on large-scale international boxing shows on holidays like July 4th, Thanksgiving, and Christmas. 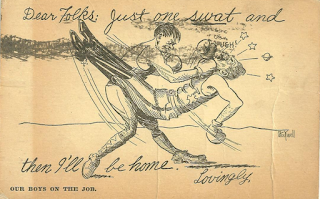 Entertaining and invigorating, yes, but also deadly, boxing and hand-to-hand combat had martial application. Undoubtedly, one camp General assured the YMCA's Athletic Division Bulletin, boxing was "one of the most useful forms of physical training which a soldier can have." Authored by the Physical Director for the Army Y at Camp Sevier in South Carolina, Hand-to-Hand Fighting: A System of Personal Defense for the Soldier contained, in his words, "a deadly system whose climax is nothing less than the destruction or crippling of the opponent." Already proven effective by a number of companies at the Camp, the deadly system illustrated in this manual included such pedagogical nuggets as: "Never miss an opportunity to destroy the eyes of the enemy. In all head holds use the fingers on the eyes." "Never give the enemy a chance to recover after he is thrown, but stamp upon the neck with the foot." And, "Don't kick, but jump upon it with the full weight of the body." Similarly, a pamphlet published by the Springfield College YMCA, "War Games and Hand-to-Hand Fighting," advised soldiers on trench moves such as the "forearm thrust and crotch hold" and the "head-twist and eye-gouge" as well as pie eating contests. 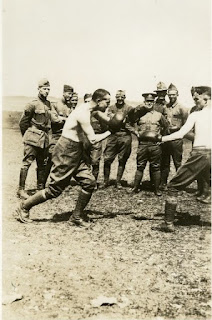 Perhaps best of all, boxing not only exercised, entertained, and killed, it instilled virtue. The "great value" of boxing, read a 1918 edition of the YMCA's Athletic Division Bulletin, is "in the development of those physical and spiritual qualities that are characteristic of the aggressive fighting man." Fortunately for human males, those virtues were already inside. "Boxing lives because it appeals to the most fundamental instincts in man," claimed a 1922 edition. Boxing revealed that which was already there. In the words of one YMCA College graduate, the "'fighting instinct,' 'fighting blood,' 'fighting tendency,' or whatever it may be called, it is in us. It is predominately natural." Boxing showed man the good inside.

Being a thing already there, naturally, boxing spoke a kind of universal language, which was particularly befitting the new global, geopolitical context. "Nations which where formerly opposed to the sport are now encouraging it as the World War brought the nations together," one Y paper article claimed, as "they saw the benefits of boxing to soldiers and sailors." Boxing was well on its way to becoming "one of the greatest international sports," claimed YMCA proponents, but we must always remember to "KEEP THE SPORT CLEAN."

Boxing was a lot of things for the Y and the AEF. By the end of the War, boxing fans were legion and amateur boxers were commonplace. In just the five months between Armistice and the 1919 Inter-Allied Games (hosted by the Y and the US military) boxing competitions saw almost 7,800,000 spectators and over 730,000 participants. The lessons that boxing had (that the Y taught) stretched untold distances and stimulated countless imaginations. In the words of "Y man" and Inter-Allied Games middleweight champion, "If Jesus Christ were living to-day I believe he would take up boxing." Or as General Pershing told the audience at the Inter-Allied Games before the boxing and wrestling finals, thanks to the YMCA's boxing instruction programs "two million [American] men are going to carry back home a better notion of what a clean sport should be."