Chicken Chaplains: A Business Made in Heaven

At the end of a short video about Tyson Food's chaplaincy program, Dr. David Miller, identified earlier in the same video as "Princeton University Project Director Center for the Study of Religion and Author" states, "If I could give you a little pill that you could put in the water at the cafeteria, the canteen, everyone have it, and that pill would make everyone be a little bit more loyal, a little bit more engaged, have a little bit higher loyalty, be a little more creative, a little bit more absenteeism, and assuming there are no negative side effects, would you take that pill?" "Well of course!" Miller states, all while having an apparent conversation with himself. If one is hesitant about any potential repercussions about using metaphors about drugging your employees, you need not worry because as the video fades out, Miller gives us his gotcha moment: there are no real drugs at play. Instead, "well we've just described workplace chaplaincy."

For Tyson and others, however, this pill or program can't keep workers from using the restroom, and recently big chicken has been making headlines undergoing fire from groups bringing to light the horrible conditions of poultry workers, highlighted by the routine denial of bathroom breaks. And this isn't the first time. Coupled with recent legislative bills anti-whistleblower, or ag-gag laws passed in various states across the country, and the fact that four companies – Tyson, Pilgrim’s Perdue, and Sanderson Farms – control roughly 60% of the poultry industry and employee some 250,000 workers. This is not a small issue. Coupled with concerns over claims of animal cruelty, polluting the environment, and bankrupting contract farmers, the chaplaincy program sidesteps these issues by tying into some apparent universal construction of spirituality.


While Chick-fil-a tends to drive the popular market for news about chicken conservatives, and while there might be nothing more capitalist than a peanut with a top hat, cane, and monocle selling you other peanuts to eat (though cow versus chicken fight has to come close?), like all "good" big business, big poultry has a long history of capitalism and religion. This narrative is industry wide with new companies contending that to have chicken is to have happiness. My personal favorite is the self-proclaimed "Maverick" of Chicken, John McCain Brian Thomsen, whose company Carolina Premium Foods, claims to be "the largest provider of ultra-high-quality, organic, and all-natural poultry products", in part because of God's blessings and "the gift of His Son Jesus Christ." 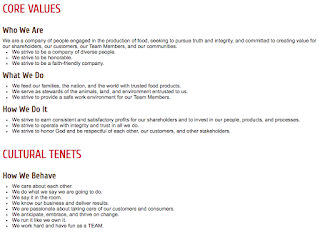 In any case, of the four horsemen of the chicken apocalypse (some 9 billion chickens are slaughtered each year in the US alone), the Tyson chaplaincy program is the largest of these programs. It's basic facts are found on their website under a tab titled “Ways We Care” alongside things like “Animal Well Being,” “Communities,” “Diversity,” “Environment,” “Giving Back,” and “Sustainability” among other programs. The website highlights the efforts of the more than 115 company employed chaplains who “provide compassionate pastoral care to Team Members and their families, no matter that their religious affiliation or beliefs might be.” Further, as tied to the corporate culture of Tyson according to the born-again John Tyson, "It's a reflection of us as a faith-friendly company striving to take care of each other - to help, support, nurture, and encourage."

Institutionally, this program holds an interesting position situated between big poultry, evangelical Christianity, and university business schools. At the "Tyson Center for Faith and Spirituality in the Workplace" housed (surprise of the year) within The Sam M. Walton College of Business at the University of Arkansas, for example, religion in the workplace is seen to support "Authentic Leadership" which, according to the Center’s mission statement, "empowers" and benefits employees, companies, and communities. The Center, founded by a $2 million donation, goes so far as to state that it will "be a catalyst in the transformation of modern workplaces by integrating faith and spirituality into educational and business models that lead to personal well-being and sustainable profits." 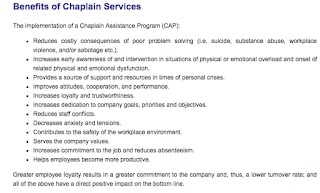 Utilizing common language used by chaplains in prisons, the military, and elsewhere, this program links free market chicken to free market religion. Other businesses sing the praises of these one stop fix all programs. For instance, Corporate Chaplaincy Consulting located in Wisconsin provides a nice list of the benefits of their chaplains and their website provides more information than you could ever want to have, and like Miller's pill, there are no negatives found on the company’s website. There is even a handy kit to help start your own for-profit chaplain program calling it "A business model made in heaven."

Another employee care company, nonprofit Marketplace Chaplains USA, provides an even more over-the-top (literally, there is battlefield footage spliced throughout the video) in not so subtly nuancing the benefits of their services. Just look at these employee reactions: 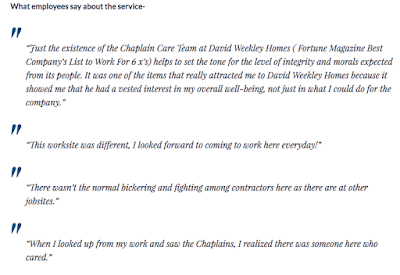 A nine-minute video found on the company’s website titled "Corporate Wellness Strategic Initiative" begins by stating, "life, like a battleground, is full of victories to celebrate, and defeats to mourn." In what follows, and I am not totally unconvinced the video isn't produced by the same people doing the scientology website, Marketplace Chaplains encourage you to "serve on the front lines of life" by giving desperate workers someone to talk to in the darkest hours. The company states they are based on the "military model" of chaplaincy, in that their approach is "low-key, non-threatening, and available to anyone, regardless of background." The company argues that if you hire some of their chaplains your company can improve it's "bottom-line, profit," by "supporting the top-line, people."

Across all of these programs, broad worker support (though there are no signs of unions in the workplace, just lots of encouragement) supplemented by chaplains can help assure workers happiness and thus, worker productivity. The same wellness video even takes it one step further, showing a computer-generated image of a survey, apparently given to "employees" somewhere, who ranked their benefits. Of course, "Chaplain Care Team" was voted the best employee benefit beating out other, lesser things, like "Paid Vacation," "Health Insurance," "Retirement Plan," "Disability Insurance," and, "Holiday Time Off." Because of course it did. This reflects Tyson’s program as well as company chaplain Demetrice Swift puts it, "The Company cares about being of the individual, not just how well they get paid, or you know, anything tangible or physical, that we care about the whole person."

As such, these religious benefits of the chaplaincy program delve right into the founding narratives of these companies. A common bootstrap narrative goes across the entire company, as a video that could be the origin myth for any give transnational corporation. The video states that in 1935 around the company’s founding: "During the Great Depression nothing came easy. It's a time when you had to keep it real because times were tough. With just five cents, an old truck, and a load of hay, John Tyson and his family quickly began finding innovative ways to deliver quality chicken to other hard-working people." Then, in a turn of phrase that invokes the spectre of David Chappell circa 2004, Tyson Chicken promises to "Keep it real." Stating:

"Today, Tyson continues to find new ways to feed families across the country and around the world to help put a chicken in every pot, every oven, grill, slow cooker and skillet because no matter who they are or where they’re from, everyone deserves to serve up a good meal. Whenever they want to. To get farm raised chicken of the highest quality. Real chicken. At Tyson we remain committed to this simple promise to always keep it real. To always keep it Tyson."

Others, however, are less sure of this keep your head down and work narrative and of the chaplain project as a whole. While these companies argue that chaplains are the cure all for keeping business strong through the recent recession, others are not buying the story. As Kim Bobo, executive director of Interfaith Worker Justice argued in a New York Times article in 2006 when these complaints first came to light, "The thing that is challenging when working in meatpacking and poultry is that you're talking about places that have major violations in labor law. The chaplains do absolutely nothing to challenge those laws and stand with workers - and they can't because they work for the employers."

Most recently calls for the meat industry to stop their infringement on worker rights both outside factories in relationship to predatory loan programs, and inside, as a recent watchdog report reveals that some workers have taken to wearing pampers on the line because they are not getting bathroom breaks, centered on the hashtag "give them a break."

While in many ways there is little new about this particular brand of corporate chaplaincy, it does appear that Tyson is serving a healthy side of American religion with it's poultry and will continue to do so for the foreseeable future.