I have just returned from the Annual Meeting of the Society for Historians of American Foreign Relations (SHAFR), which convened at the beautiful Kroc Institute for Peace & Justice at the University of San Diego.

I am happy to report that, as Andrew Preston noted while commenting on one panel, the range of papers included in this year’s program makes clear that “religion is now a standard topic in diplomatic history,” something that would not have been true even a decade ago. Indeed, SHAFR offered up numerous panels and individual papers of interest from established scholars as well as from graduate students working on cutting edge research for their dissertations.

I would like to share a brief overview of the exciting work that scholars presented on the history of religion and foreign policy. As is the case with all great conferences, each session boasted multiple panels that I would have liked to have attended, but since I (sadly) can only be in one place at once, I will not be able to offer a full accounting of each panel that addressed religion in some way. Instead, I will discuss two of the panels I attended and then, at the end of this post, I will provide a list of all of the papers that pertained to religion and perhaps other attendees can fill in the gaps in the comments section. This will also serve as a snapshot of some new and forthcoming work in the field. 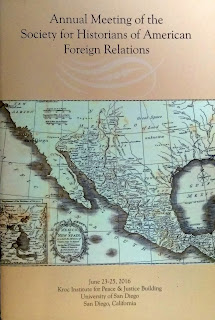 Andrew Preston chaired and commented on a panel with the evocative title “Agents, Loose Cannons, and Troublemakers: Religious Activism and U.S. Foreign Relations from World War II to the 1980s,” which featured papers from Matthew Avery Sutton, Mario Del Pero, and Theresa Keeley. All three presenters offered papers drawn from new books in progress, which made for an incredibly stimulating discussion. Sutton started out with “Religion and U.S. Espionage in World War II,” which revealed how the Office of Strategic Services (the precursor to the CIA) recruited Christian missionaries to serve abroad as agents and assets in the fight against the Axis powers during World War II. He noted that not only did these missionaries make excellent spies due to their language skills and evangelistic training, but also that they embraced their new role as a means to ensure that the Axis would not “cut off regions to evangelism” by winning the war. Mario Del Pero brought us into the postwar period with his paper, “Ten Texan Evangelicals in Rome: Micro-History, Religion, and the Early Cold War,” which explored the efforts a small group of evangelicals who worked strenuously to overcome Italian government restrictions against evangelism by Protestant sects. Through a microhistory that blended a discussion of Italian constitutional reforms and evangelicals lobbying congressmen in the United States, Del Pero reflected on the power of religious groups to shape policy—a power that he noted was often far more significant than the size of the groups involved would seem to warrant. Finally, in “‘This is not a hearing about theology’: Senate Hearings on ‘Marxism and Christianity in Revolutionary Central America,’” Theresa Keeley zeroed in on a 1983 congressional hearing to examine how anti-communist congressmen cast Liberation Theology as a threat to national security. She discussed the constitutional issues that the hearings raised and how the FBI and U.S. officials conflated U.S. missionaries who advocated for social justice with “terrorists” in Central America.

In his comments on these riveting papers, Andrew Preston argued that all three shared some common themes by looking at individual religious actors and their interactions with political leaders. He also picked up the thread that Del Pero introduced, commenting that religious activists often managed to “punch above their weight” in terms of influence because of  the “deep connections around the world” that they developed through evangelism, their high levels of organization and funding,  and the nature of the U.S. political system, which ensured the public had “multiple access points to power.” He argued that, taken together, the papers ably answer the questions that all historians who study the role of religion in U.S. foreign relations face concerning evidence and how they measure influence: ultimately, he concluded, religion is present throughout the government records—even where you least expect it—and we can think of influence as a phenomenon that operates in multiple ways and on multiple levels in our politics. The more interesting questions now, Preston suggested, pertain to theology and values. He called on historians of religion and U.S. foreign relations to take seriously the values and theological beliefs of the actors they study and to seek to understand how and why the beliefs of a specific denomination might shape their policy agendas. This seems like an area where religious studies scholars might make helpful contributions to this field. Preston also suggested we should work on exploring how international relations and foreign policy have reshaped theology, values, and religious groups writ large in the United States. In other words, even though religion is now a diplomatic history standard, there remains much ground to cover. Luckily, there are a number of graduate students who presented at the conference (SHAFR is very friendly and welcoming to its graduate student members!) who are working on dissertations and theses which will push the field to consider some of these challenges that Preston raised.

Another panel that I attended, “The Politics of the ‘Sacred’: American Foreign Relations and Faith-Based Foreign Aid in Interwar Europe, 1918-1939,” featured four papers on religious non-state actors that provided humanitarian aid to a devastated Europe after World War I. In this panel, Doina Anca Cretu presented “The YMCA’s Assistance Practices and Nation-Building in Greater Romania, 1918-1939,” Paul Niebrzydowski discussed “Reining in the Four Horsemen: U.S. Postwar Relief in Wartime Poland, 1918-1923,” Michael McGuire provided a detailed account of “Muddling Methodists: American Evangelical Relief of French Civilians and Franco-American Relations in the Great War Era, 1918-1935,” and Guy Aiken shared the fascinating “How American Quakers Helped Save Weimar, and then Tried to Save the Third Reich’s Jews.” All four of these papers incorporated impressive multiarchival research and the panel as a whole offered the audience a way to link the microhistorical accounts of relief efforts in individual European countries by different groups of Christian volunteers with the larger history of interwar relief and reconstruction. In response to the evidence of deep foreign engagement on the part of these U.S. Christian organizations, the panel’s chair and commenter, Branden Little, raised a most interesting question: how does this extensive postwar foreign aid from U.S. religious humanitarian groups complicate our notions of isolationism in the interwar period? This spurred some excellent discussion from the panelists, who also reflected on the social gospel, the significance of theology as a motivator for humanitarian aid, and the influence of Christian nationalism in the interwar period.

All in all, it was another wonderful SHAFR meeting. I cannot wait to see what next year's conference will bring and hope to see even more RiAH folks there in 2017, when the conference will be back in D.C.

Below, I have listed all of the panels and individual papers that reflected in some way on religion and American diplomatic history, broadly defined. A link to the full program is available here.

Paper of particular interest:
“Through the Instrumentality of Modern Mohammedanism”: Looking Towards Constantinople in the Islamic Philippines, 1899-1913
Oliver Charbonneau, University of Western Ontario

Emily Conroy-Krutz, Michigan State University, who has recently published a book entitled Christian Imperialism: Converting the World in the Early American Republic, participated on this roundtable

Human Rights and the Task Force Detainees of the Philippines: Religious Opposition to the Marcos Dictatorship, 1972-1986
Mark Sanchez, University of Illinois, Urbana-Champaign

The paper I presented...
Apartheid: The Reagan Administration, the Religious Right, and the Challenge of U.S.-South African Relations
Lauren Turek, Trinity University


Panel 50: The Politics of the “Sacred”: American Foreign Relations and Faith-Based Foreign Aid in Interwar Europe, 1918-1939

How American Quakers Helped Save Weimar, and then Tried to Save the Third Reich’s Jews
Guy Aiken, University of Virginia

Paper of particular interest:
A Secular Religion? Dietrich Bonhoeffer and the Moral Authority of Human Rights Claims in the 1970s
Robert Brier, London School of Economics


Panel 56: Imperial Connections at the End of the Vietnam War

“This is not a hearing about theology”: Senate Hearings on “Marxism and Christianity in Revolutionary Central America”
Theresa Keeley, University of Louisville