Skip to main content
Labels
Posted by Lauren Turek May 27, 2016

In her two most recent posts for this blog, Emily Suzanne Clark spurred vigorous and productive discussions about teaching with primary sources. [1] Much like Emily, I assign many primary sources in my classes, as I agree with her that they "illuminate conflict and show moments of creative tension in American history. They show how the past can be a foreign country and they reveal how the past is not so different from today." [2] In my courses on U.S. foreign relations, I find that primary sources that address religion in some way or that use explicitly religious language can help my students think more deeply about the role that ideology has played in shaping and restraining past U.S. foreign policy decisions. Such sources also allow my students and I to consider Christian nationalism and internationalism, civil religion, and a host of other interesting themes as we discuss the history of American foreign policy. Additionally, these documents can sometimes illuminate the historical context for contemporary foreign policy challenges.

Given Emily's recent posts, I thought I might start to (occasionally) share some of my favorite primary sources from the history of religion and American foreign relations, with the hope that readers might find them useful for teaching or that they might suggest similar sources they have found helpful in their own work or classrooms.

Since President Obama made a historic trip to Vietnam this week, I would like to start off by sharing a document I have assigned in my classes that addresses the religious dynamics of U.S.-Vietnamese relations before and during the Vietnam War. 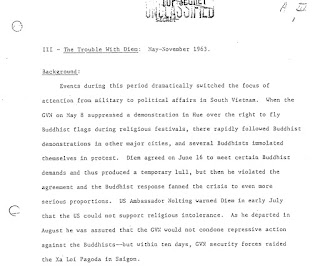 First, a little context on President Obama's trip and the controversy that it sparked. While in Vietnam on Monday, May 23, President Obama announced his decision to lift a ban on arms sales to that country that dates back to 1975, part of an effort to counter the growing military power of China. This decision came amidst criticism that Vietnam has failed to make adequate progress in improving its human rights record, particularly in light of ongoing religious repression and the imprisonment of religious leaders (including Catholics, Protestants, Khmer Krom Buddhists, and others) and political dissidents. [3] While the Obama administration contends that ending the embargo will provide the United States with greater leverage to compel Vietnam to abide by international human rights norms, some critics worry that this move may have the opposite effect.

Reading about this called to mind a fascinating document concerning the United States' response to religious repression in South Vietnam during the Buddhist Crisis, which exploded after the Huế Phật Đản shootings in May 1963. Earlier that year, Ngô Đình Diệm, the leader of South Vietnam and a devout Catholic, and his brother Ngô Đình Nhu had begun waging a campaign of harassment against Buddhists, who constituted the majority religious group in South Vietnam. When Buddhist activists protested the restrictions Diệm had placed on their religious practice, the South Vietnamese government cracked down violently, killing a number of protesters and injuring scores of others. Some Buddhist activists such as Thích Quảng Đức immolated themselves to protest the government's actions, as captured in one of the most iconic photographs of the crisis. The religious persecution and the unrest that followed precipitated Diệm's arrest and assassination in November 1963. Documents from the time reveal the extent to which this crisis contributed to the Kennedy administration's support for the coup that ousted Diệm. [4].

When I cover this event in my courses, I have students read part of a study that the State Department's Bureau of Intelligence and Research (INR) published in 1969. The study, a review of the agency's decision-making before and during the war, includes section entitled "The Trouble with Diem: May-November 1963." As a retrospective review of intelligence and decision-making, the document sheds light on how the State Department and the Kennedy administration understood and interpreted the situation on the ground as the Buddhist Crisis unfolded. It also provides fascinating insight into the manner in which the State Department discussed core American values, such as the principle of religious freedom, in their assessment of the Diệm regime and U.S. interests in the region.

The document recounts how the U.S. ambassador "warned Diệm in early July that the U.S. could not support religious intolerance," and how, after the Diệm regime nevertheless proceeded to raid pagodas in Saigon, the United States felt compelled to withdraw support from South Vietnamese president (INR, 1). Both the Kennedy and Eisenhower administration had supported Diệm due to his staunch anti-communism (and their desire to see the communist North Vietnamese forces defeated), and they may have felt some affinity for the Diệm brothers due to their shared Christian faith. Yet the scale of the protests that Diệm's pro-Catholic policies and violent repression of Buddhists had produced led to an international outcry that U.S. leaders could not ignore. (INR, 4). In class discussions, this provides an opportunity to consider not only the manner in which religion has figured into American core values, but also how American principles interacted with domestic and world public opinion to shape the U.S. response to events abroad.

In addition to the bad optics that would come from the United States continuing to support a leader who restricted the rights of religious groups, the report suggests that Diệm's actions also had a negative effect on the American effort to repel the Viet Cong. According to the INR, U.S. leaders noted that Diệm's repressive policies against the Buddhists might have led to the "steady erosion in resistance to communist attacks and subversion" that hindered the South Vietnamese war effort (INR, 7), and as such they believed a coup against Diệm might ultimately serve U.S. interests in the region. (INR, 6). For this reason, reading this document in concert with State Department communications from 1963 and newspaper articles on the Buddhist Crisis can allow students to discuss how human rights concerns and the activism of religious groups (abroad but also at home) at times guided U.S. decision-making.

Certainly, there are many other aspects of this document worth exploring (I fold this into a larger multi-class discussion of the role of religion in waging the Cold War for example, and I would love to see other readings and thoughts in the comments!). There are also many other documents out there that deal with the Buddhist Crisis and the Kennedy administration's response to it. The National Security Archive, where I found the document discussed above, is just one of many wonderful resources for such primary documents.

Still, as an internal retrospective that includes a nice, brief summary of the events under consideration, this document offers multiple layers and points of entry for discussion—from how the State Department framed U.S. concerns after the fact to the seemingly seamless merging of U.S. interests with the notion that the United States should protect (or at least seem to protect) international religious freedom. This latter point also speaks to the current events in U.S.-Vietnamese relations mentioned earlier. Though the specifics of the religious repression has changed, the challenge that religious persecution poses to U.S. diplomatic relations remains. The concern surrounding the end of the arms embargo highlights the legacy of human rights issues and activism that have long influenced U.S. relations with Vietnam. As such, in future classes I plan to connect this document to these more recent events as I think about the long trajectory of U.S. foreign relations, and the changing role of religion within them.