Skip to main content
Labels
Posted by Paul Putz May 20, 2016

Religious Activism in the Pacific Northwest 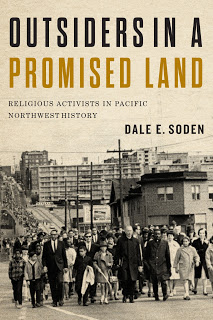 Kevin Kruse's One Nation Under God and Matthew Sutton's American Apocalypse are both blockbuster books on conservative American Christianity. But that's not the only trait they hold in common. Both books also prominently feature Christian leaders who operated out of the Pacific Northwest. Sutton uses Seattle's Mark Mathews, pastor from 1902-1940 of one of the country's largest Presbyterian churches. Kruse features Abraham Vereide, also based in Seattle, who combatted socialism by reaching out to businessmen and civic elites in the 1930s. Vereide's efforts led to the prayer breakfast movement, which eventually made its way to the halls of power in Washington D.C.

I had not thought much about the shared home region of those two figures until I read Dale Soden's Outsiders in a Promised Land: Religious Activists in Pacific Northwest History (Oregon State University Press, 2015). In Soden's text both figures appear, working alongside numerous other religious leaders in the region that Patricia Killen has aptly described the "None Zone."

With Outsiders in a Promised Land Soden provides an account that stretches from the late-nineteenth-century to the present, describing the ways in which "religious activists, in this least-churched region of the country, have shaped the struggle to define the nature of public life" (p. xiii). For Soden, "religion" mainly comes in the Catholic/Protestant/Jew formula. But if his selection of subjects follows a traditional path, the setting in which they operate provides a unique frame. Rather than the standard "anxiety over lost prestige" as a motivating factor for religious (mostly Protestant) activity, Soden's religious activists -- whether conservative or liberal -- viewed themselves as outsiders in a hostile culture. For them, there was nothing to "take back" in the land of the religiously unaffiliated, only new ground to be gained.


Soden, a professor of history at Whitworth University in Spokane, is well placed and well qualified for his task. Most notable among his previous publications, he wrote a biography of the afore-mentioned Mark Matthews. He has also provided essays for two excellent anthologies: Gender and the Social Gospel (he wrote about the WCTU's social gospel activities in the Pacific Northwest) and Religion and Public Life in the Pacific Northwest: The None Zone (he tried out some of the ideas found within his current book, writing about the activism of mainline Catholics, Protestants, and Jews). It seems that Outsiders in a Promised Land is a culmination of sorts for Soden's entire body of work thus far in his career.

Soden's narrative is organized into ten chapters. The first five cover the period from the Gilded Age until the 1920s, a period that Soden says was marked by attempts to regulate the behavior of young, working-class men. Religious activists founded new educational and social institutions, campaigned for temperance, and launched crusades against urban vice. They brought Victorian assumptions to bear in their public activity, often framing their efforts as attempts to defend and protect women and children. Soden views the 1920s rise and fall of the Ku Klux Klan* in the region as the transition point from one primary cultural conflict to another. In the years after the 1920s, he writes, the main issue was "not so much between present and desired forms of male behavior but between two competing visions for American society" (p. 110). On one side stood champions of "religious toleration, cultural pluralism, and social justice." On the other side stood the defenders of conservative social values. Both sides viewed themselves as outsiders.

The last five chapters run with this culture war theme, and they are organized as a back-and-forth between the two sides. First there's "Justice On The Rise," (chapter six), documenting Great Depression campaigns for economic justice and the defense of marginalized groups, including Japanese Americans during World War II. Then, in "The Right Gathers Itself" (chapter seven), Soden describes the efforts of Abraham Vereide, Youth for Christ, and Fred Schwarz to mobilize against communism and secularism. That is followed by "Trying To End Segregation" (chapter eight, one of the strongest chapters in the book), in which the region's black church leaders spearhead efforts to challenge segregation in the 1960s. Next, in "The Christian Right Strikes Back" (chapter nine), Soden argues that the Pacific Northwest's Christian Right was not primarily motivated by racial issues, but rather drew strength from fears over the extension of civil rights activism into the realms of feminism and sexual orientation. Soden concludes by giving liberals the last word with "Liberal Dreams and Ecumenical Activists" (chapter ten), an examination of campaigns by religious progressives to extend and defend civil rights, oppose war, promote economic justice, and defend the environment.

One of Soden's most impressive feats in Outsiders in a Promised Land is providing a coherent narrative thread. By emphasizing the theme of religious activists as outsiders --first in a class-based confrontation with working-class men and then in the cultural battles between competing middle-class groups -- Soden manages to cover 150 years of religious activism in a readable and easy-to-follow way. At the same time, Soden consistently highlights national trends and movements even as he provides a regional perspective on the same.

Of course, any book as ambitious as this will necessarily neglect some themes or topics. As mentioned above, Soden tends towards a tri-faith view of religion, with Protestants receiving the most attention. The religious activism of individuals who did not operate within an institutional Jewish, Catholic, and Protestant framework is largely absent. So, too, Soden tends towards an urban focus. The cities of Portland, Seattle, and Spokane dominate, and there is little sense of how rural/urban differences might come into play in the region.

That said, Outsiders in a Promised Land is a very good book that should be of particular interest to scholars who study the history of religion in the American West. I imagine that this book would also be well-suited for use in an undergraduate course on religion in the region (although the target market for such a course would be confined to schools in Oregon and Washington). Those seeking to understand or tell a national story would benefit from the book as well -- it might be wise to follow in the footsteps of Kruse and Sutton by including religious leaders who toiled away in the None Zone. For any such efforts, Soden's book is the essential introduction.

*In Soden's section on the KKK he approvingly cites the work of Kelly Baker, a scholar who should be familiar to many readers of this blog. But in the text Baker is mistakenly referred to as "He" (p. 103). I've heard scholars mention before how annoying it is when a reviewer highlights typos, but I felt like this error -- no doubt unintentional -- should at least be pointed out.
Email Post
Labels: book reviews culture wars Pacific Northwest putz religion in the american west twentieth century