Regular readers of this blog may be interested in a graduate student conference that will be held here at Northumbria University on Friday, September 9, 2016.  A PhD student I've worked with here, Megan Hunt, is organizing it.  Looks like the conference will be a rewarding and fascinating experience. 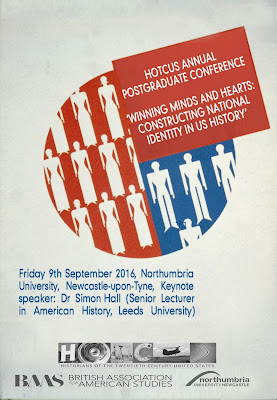 Historians of the Twentieth Century US (HOTCUS) Annual Postgraduate Conference: "Winning Minds and Hearts: Constructing National Identity in US History."

On 1 February 1943, President Franklin Delano Roosevelt asserted that "Americanism is a matter of the mind and the heart." Just a year after he approved the mass incarceration of Japanese Americans, FDR’s statement about the inclusiveness of American identity highlights one of the key questions scholars face when writing the history of the United States: What do we actually mean when we talk about US national identity?

The distinction between what is and isn’t American has dominated the history of the twentieth century United States, from the Hollywood Blacklists of the 1950s and protests in the streets of Selma, Alabama in 1965, to clashes between construction workers and Vietnam War protesters in New York City and debates over U.S. military strategy in Iraq and Afghanistan. In these instances and many others, the process of defining national identity remains central to our understanding of U.S. history.

The conference will primarily be formed of traditional academic panels, with a keynote lecture from Dr Simon Hall. An interactive workshop on postgraduate and early career issues and concerns will also feature, with discussions of grant applications, teaching, and publishing.

Abstracts for papers or panels (300 words per paper) and a brief bio (100 words) should be submitted to hotcuspostgrads@gmail.com by Friday July 15, 2016. For more information/queries please contact the HOTCUS postgraduate secretary, Megan Hunt (megan.hunt@northumbria.ac.uk).
Supported by the British Association for American Studies.
Email Post