Skip to main content
Labels
Posted by Michael Graziano May 04, 2016

Exporting Freedom and the Politics of Disestablishment 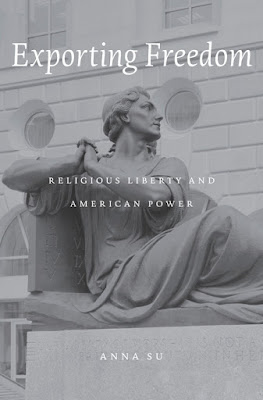 This is the first post in a series responding to Anna Su's new book, Exporting Freedom: Religious Liberty and American Power (2016). We'll feature other responses throughout the month of May.


In The Lexus and the Olive Tree (1996), Thomas Friedman put forth his “Golden Arches Theory of Conflict Prevention.” Friedman suggested that two countries that both had McDonald’s would not go to war against one another. This reassuringly capitalist teleology didn’t quite pan out, though, and he supersized it to the Dell Theory of Conflict Prevention in 2006’s The World is Flat which, I will simply note, won the inaugural Goldman Sachs Business Book of the Year Award.

I was reminded of Friedman’s prophecy while reading Anna Su’s new book, Exporting Freedom: Religious Liberty and American Power (2016). Su is no Friedman, but her book could be considered a study of Friedman-like attempts to understand the big ideas that govern human interaction. Friedman, like many of the subjects in Su’s book, thought he’d discovered a peace-and-justice algorithm built into modern society. Su is looking at something as American as apple pie (or, well, as McDonald’s): religious freedom. Su tells a story of Americans convinced that they could make the world a just and peaceful place by exporting American-style religious freedom around the globe.

Su addresses two related questions about religious freedom: (1) How did Americans theorize the world around them by extrapolating from their own national experiences? (2) How did these theories come to be applied around the world and under American imperial power? These questions are made all the more pressing by the ease with which “religious freedom” is thrown around by American leaders. Anyone with the mettle to stomach a presidential debate has surely heard it proffered as a foreign policy panacea for global ills of every variety. How did that come to be?

Su frames her narrative as an “outward-looking story of American religious freedom,” and uses this angle to see familiar stories in unfamiliar ways. Su argues that the development of international religious freedom rhetoric (and the policies designed and executed in support of this rhetoric) was the “handmaiden” to America’s rise as a global imperial power (10). She supports her argument through a series of case studies that trace the long twentieth century, from the American occupation of the Philippines to the American occupation of Iraq. Su uses the American experience in each country to illustrate U.S. policymaker’s conviction that “religious freedom” is a necessary—and perhaps even sufficient—ingredient of peaceful, democratic governance.

Across the globe and throughout the twentieth century, American policymakers understood “religious freedom” to require disestablishment. So, for example, in order to enforce religious freedom in the Philippines, the American colonial government had to "enmesh" itself in church-state disputes throughout the islands (26). Americans in foreign countries found this strange, but their experience replicated what had long been occurring at home. Su’s narrative makes clear that American attempts to enforce religious freedom—whether at home or abroad—required strategies of governance that took sides in existing arguments, regardless of any universalizing rhetoric of human equality which was used to describe it. To put it another way, these policymakers thought freedom from established religion was wonderful unless one wished to exercise their religious freedom to establish a religion. The utility of looking at this process internationally is that it renders the contradictions woven into the American system especially apparent: the strangeness was simply easier to see on a foreign stage.

At the other end of the long twentieth century is the American invasion of Iraq in 2003. Su recounts the play-by-play struggle to write Iraq’s Transitional Administrative Law, a kind of temporary constitution. As Su notes, one of the stickiest of the sticky wickets was the place of Islam in the new Iraqi governing body. There was disagreement about the dangers of, variously, including it or not including it: Would Islam be established as a state religion? Would it be possible to have religious freedom under a state religion? (Was it even possible to include Islam without it establishing itself as a state religion?) The fear of an emergent “Iranian-style theocracy” haunted American policymakers, and Su notes a variety of responses to address this problem.

Whereas in previous imperial engagements “religion” writ large was perceived to be self-evidently on America’s side, the presence of Islam seemed to be a difference that made a difference. Su notes that many on the Christian Right were hoping for an entirely secular Iraqi constitution or, at the very least, one with a strong religious liberty provision: “I’d like to be sure that if I came to Iraq as a Christian,” President Bush cautioned, “I would be free to practice my religion” (153). In Iraq, it seems that “secularism” was closer to “Christianity” than Islam. If the benefit of religious freedom was that it ensured disestablishment and encouraged peace, a religion perceived as impossible to disestablish simply did not offer the same rewards.

Throughout each example, Su reveals Americans’ confidence in articulating religious “solutions” to religious “problems” around the world. That Americans tried to model American forms of governance in the Philippines, Japan, and Iraq is well-known. Yet Su highlights just how odd it is, for example, that Americans at the turn of the 20th century—familiar with Protestant-Catholic religious tension at home, and disputes over the nature of the First Amendment—should think themselves ready and able to design a disestablished state in the Philippines.

Historians of American religion will take issue with some of Su’s characterizations of religious figures and movements, such as when Su describes the silent majority as that “which would eventually become the religious right” (113). Yet this does not mar Su’s important contribution to the growing body of work considering the intersection of law, religion, and American imperial power. Su’s book is valuable because of how it conceives of American ideas about the world, and how these ideas were themselves inextricable from the increasingly global nature of American power in the twentieth century. The questions that motivate her work—how and why did Americans conceive of the world in certain ways, and what did this lead them to do—are increasingly important questions with which historians of American religion should wrestle.