Last month I focused on written primary sources (though hopefully you noticed that the post's images were visual complements to two of the selections). This is typical way I organize class: homework is reading, class is full of discussion with images and other media. We dissect images, we note what strikes us in them, we use those readings to help us see things in the images we wouldn't otherwise see. I also add in as much music and video as I can too. In fact, I begin class everyday with what I call "mood music." I play a song as the students file into the classroom and get settled in. I can't claim originality here; I stole the idea from my M.A. advisor Chip Callahan. The mood music sets the tone, and, as some students have figured out and remark on, the music gets at the topic in another way. There's so much about The O'Jays' "Ship Ahoy" that sets the right atmosphere for a discussion of religion and the Atlantic slave trade. And Depeche Mode's "Personal Jesus" is just a fun way to begin a class on the Second Great Awakening. 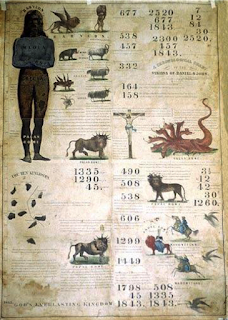 I'll start with favorite media primary sources from my American Christianities course, then move to African American Religions, and end with Native American Religions. I included one of my favs in the post last month; the original engravings of The Awful Disclosures of Maria Monk provide much to discuss in tandem with the excerpts they read before class. Millerite charts about the end of the world and God's countdown say so much more than I ever could about them. I have my students read the prologue to Evidence from Scripture and History of the Second Coming of Christ about the Year 1843 to equip them with Miller's use of symbols and then we talk through those images in class. Showing images of Father Divine and thinking about the belief that God was in the body of a short, balding, African American man brings more to his ideas of "tangiblization." 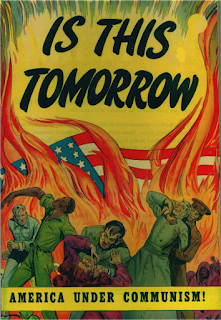 One of my other favorite primary sources to teach is the 1947 comic book Is This Tomorrow?: America Under Communism, a what if dramatization of a communist takeover of the country. It was published by a Catholic educational society and had an estimated readership of 10 million children. The comic is a great source for a number of reasons. It's a graphic novel reflection of Will Herberg's Protestant, Catholic, Jew in that, while it focuses on the Americanism and vulnerability of Catholics, any patriotic and religious American is threatened by communism. It also provides a nice epilogue to discussions of anti-Catholicism. A 10-minute video on American citizenship (also taken from Chip's teaching repertoire) couples really well with the comic book. The dark shadow of communism and its threat to our godly American way of life is explored, and while I could describe those ideas in class, it's so much better coming from a propaganda video (especially one that warns people about propaganda!).

In my African American Religions class we spend the last week thinking about religion and hip hop. Their reading one day is lyrics from conscious hip hop artists from Grandmaster Flash to today. One of the songs I always choose is Public Enemy's "Fight the Power." We watch and then analyze the full 7 minute music video in class. We do the same with Kanye's "Jesus Walks." The students bring a lot to the discussion from the lyrics, but the music video brings even more.

Image, sound, and video brings a lot to my Native American Religions class as well. Photos from the Carlisle Indian Boarding School work very well in the classroom. The images so perfectly capture the colonial call to "Kill the Indian, Save the Person." In particular, a before arrival and while-at-school image of a young man provides a wonderful opportunity to see how that slogan changed Native bodies. Photographs from the Massacre at Wounded Knee also have a strong impact on students. My Native American Religions class this spring spent nearly four weeks studying the King Island community in the early 20th century. We read primary sources from the Jesuit community who evangelized them, we read the reflections of a King Islander in the 1980s looking back on his childhood in the 1940s, we read a collection of stories about shamans written down in the 1980s, and we digitized a small collection of photos of the community from 1916. In the Omeka exhibits they made, students reflected on the points of intersection between the images they digitized and the Jesuit documents they read.

Joseph Stuart said…
I like to use photos of MLK and Malcolm X together to talk about the ways each man was portrayed in the media. Calls into question they idealized religious masculinities that each portrayed as well.

Unknown said…
Could you speak a bit about making the Omeka exhibits? I'm curious how your students incorporated external media — did they provide hyperlinks, or did they ask permission to republish historical photos?
April 28, 2016 at 7:30 AM

esclark said…
Hi Dan - I'm so sorry to only see this now and fear you may never see the response. But, good question! Those particular images are housed in the special collections of my institution. On that project, we worked with the archivist and other library staff. My students scanned the archival photographs (and got fun lessons in photoshop and metadata!) and so those particular digital files were created in our classroom. It was some of the funnest, collaborative teaching I've ever done. And I just completed a similar project with students and my colleagues in the library this past fall semester.
January 17, 2018 at 9:28 PM