Inside Baseball and The Bible Cause 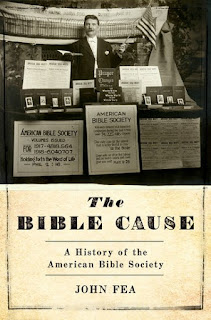 Oxford University Press has just recently released John Fea's The Bible Cause: A History of the American Bible Society (2016). The American Bible Society was a central institution of American religious life in the nineteenth and twentieth centuries, and its significance extended to such topics as evangelism, print culture, benevolence, global missions, and capitalism. This blog will feature a series of reviews of The Bible Cause by historians whose work also touches on those topics. The first review is by Elesha Coffman, author of The Christian Century and the Rise of the Protestant Mainline. —Lincoln Mullen

Institutional histories are tricky to write. I know this because I wrote one, and also because John Fea admits as much in his new book The Bible Cause: A History of American Bible Society. Institutions are not people, about whom page-turning biographies can be written, or ideas, with which a writer can wrestle. The sheer mass of them, and of their archives, limits the writer’s mobility. “It is extremely difficult to write popular reading material about the ABS,” noted ABS General Secretary Robert Taylor, who commissioned a one-hundred-fiftieth anniversary history of the society that was slated for 1966 but never completed. Fifty years later, having hit the deadline for the society’s two-hundredth anniversary, Fea concurs, observing that “institutions do not usually make for the most thrilling reading” (5).

This is not to say that The Bible Cause lacks drama. Weaving the tale of a venerable benevolent institution with two hundred years of American and, in several chapters, overseas history means covering many conflicts big (e.g., war) and small (e.g., divided responses to the line drawings in Good News for Modern Man). Fea also highlights personalities as much as possible. In the latter task, Fea is aided by the zest for adventure exhibited by ABS colporteurs and published in ABS periodicals. John Thorne, for example, recalled being pelted by peanuts and assailed by chickens while distributing Bibles in China in the 1870s and 1880s. When Chinese opposition to Western imperialism produced the Boxer Rebellion a few years later, white ABS officials managed to flee the country, but many Chinese colporteurs died, some crucified on trees (140). Fea’s is by no means a bloodless story. 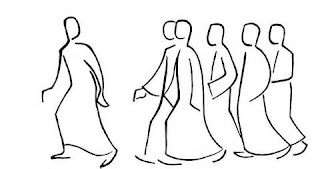 A line drawing from Good News for Modern Man

The challenges of institutional history do however weigh on the book. Fea is not unduly deferential to his subjects, his academic freedom having been stipulated before he undertook the project, but he clearly sympathizes with them, as seen in comments like the capstone to the Boxer Rebellion passage: “The blood of martyrs was the seed of both the church and the westernization of China” (141). Fea faces a bigger challenge in balancing the inside baseball intrinsic to any institutional history with an attempt to present the ABS as emblematic of American nationalism. A two-hundred-year retrospective of an institution must spend a lot of time documenting personnel and policies, citing internal memoranda, following the money, and quoting the institution’s spokesmen. Can it also present a sustained argument of interest to readers for whom the institution is merely a window on a larger world?

Fea succeeds in tying early chapters together with his argument about American nationalism. He linked the ABS to Federalism via a shared ideology and an overlapping roster of leaders. He cleverly uses an 1818 episode in which the ABS sought exemption from tariff duties and postage fees to show how the society negotiated its relationship to the state in light of the First Amendment. Congress ignored the petition, Fea writes, “but the very fact that the ABS made such a case sheds light on its understanding of the relationship between Protestantism and the burgeoning American nationalism of the post-War of 1812 era. . . . James Blythe of the Kentucky Bible Society captured this sentiment clearly when he told the American Bible Society, ‘The religion … of your Bible is the established religion of your country, established not by law, but written upon all your institutions, from the humblest court of justice to Congress Hall’” (25–26). Fea later traces this de facto Protestant establishment as the ABS pursued it to the nation’s western frontier and into parts of the world where the United States exerted its influence.

As Fea’s narrative expands in chronological and geographic scope, though, his argument fades from view. Or, perhaps, the institution simply exceeded the scope of the argument. With so many years and miles to cover, some of the book’s 27 chapters are quite short and could be summarized as, “ABS personnel went here and did this.” Readers interested in, say, ABS work in the Levant (chapter 10) or the deal struck between the ABS and Thomas Nelson over publication rights to the Revised Standard Version (chapter 20) will find concise, well-sourced information on these topics, but other readers might be inclined to skim, waiting for Fea to pick up the thread of nationalism and religious establishment under a heading such as “God and Country” (chapter 26).

Overall, The Bible Cause may be more likely to show up in libraries and bibliographies than on syllabi. It should be consulted by researchers working on Bible translation, production, and distribution; home and foreign missions; Protestant establishment; and the power shift from nineteenth-century evangelicals and their “mainline” heirs to the post-WWII variety. Fea should be commended for completing in 2016 what no less a scholar than Kenneth Scott Latourette was unable to finish in 1966.