Skip to main content
Labels
Posted by Cushwa Center for the Study of American Catholicism April 21, 2016


[In this month’s Cushwa Center post, assistant director Shane Ulbrich shares some news about a few digital projects underway at the Center. Some of these are fully up and running—see below for links—while others are still in progress as we deal with copyright or content management questions. Back in December on this blog, Heather Gary recalled the myriad lectures, seminars, symposia, research projects, and conferences that Cushwa has sponsored in the 40 years since its inception. The overall aim of our digitization efforts is to give scholars means for revisiting those many activities, by making the relevant materials readily discoverable and searchable on the web.]

Since some readers may have digital projects of their own on the horizon, I’ll first share a few words about digitization, especially since this medium-scale project has been undertaken in-house by non-experts who, nonetheless, set out to meet all the current professional standards for preservation and accessibility.

To newcomers like us, even with access to the technical resources and expertise housed at a major university, our first digitization projects seemed a little daunting. The process is complex, time-consuming, and expensive if outsourced to specialists, and each coordinated step along the way easily morphs into ten. What we anticipated would take a semester of work will, by the end of it all, probably have taken two years. This is not all that discouraging, though, in light of the usual trajectory of digitization initiatives, and considering that we have done this project in-house at the center with a minimal budget.

Besides the basic technical and mechanical processes of digitizing materials, one needs a permanent repository and functional user interface, ensuring accessibility through document processing and metadata, integrating with relevant library catalogs and search engines, and exercising due diligence on copyright and licensing questions. Fortunately, the beginner can find plenty of advice and models out there to follow. In terms of best practices and standards, Notre Dame’s Center for Digital Scholarship has provided excellent guidance. 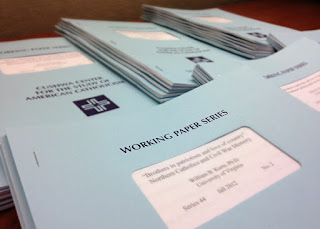 Copyright issues can complicate the move from print to digital media, so any digitization project has to include solid legal counsel (usually available through a college or university’s administration). At Cushwa, for example, we needed to clarify copyright and licensing issues particularly for our Working Paper Series—which has had more than 100 contributors over the years—as we move from print to digital preservation and dissemination.

Finally, the destination(s) for a new digital collection is a key consideration. Security and permanence are crucial for the sake of preservation, as are accessibility and discoverability for the academic and/or public user. A digital collection should be “built to last,” and not become obsolete as technology and standards evolve. Forethought and wide consultation on these issues up front, therefore, pays off in the long term. Fortunately, digital librarians at Notre Dame and other institutions are constantly developing and improving the infrastructure for institutional collections like ours.

As we’ve sorted out the various issues mentioned above, we’ve made progress on a number of fronts.

Among the hundreds of items now being digitized, a significant piece for the Center’s own institutional memory is a celebratory pamphlet from 1981. That year, Jay Dolan’s Center for the Study of American Catholicism was endowed by the Cushwa family of Youngstown, Ohio. Father Theodore M. Hesburgh, C.S.C., led its dedication over two days in May, and Monsignor John J. Egan, a Chicago priest known for his inner-city social activism and early involvement in the civil rights movement, offered the homily at a celebratory Mass. John T. Noonan, Jr., delivered a dedication address the next morning. Their reflections provide an intriguing glimpse of contemporary hopes for American Catholic historiography and the good it might do for the Church, the academy, and wider publics.

Preaching in the Lady Chapel of Notre Dame’s Basilica of the Sacred Heart, Egan meditated on the relationship between theology and history. He invoked Hesburgh’s phrase that the university is “the place where the Church does its thinking.” A theology faculty might be paramount in that task, but Egan carved out a clear role for history, as well: “Theology, we are told, is the Church’s self-understanding, history its memory. History without theology is memory without meaning; theology without history is self-understanding risking self-deception.” He went on to offer provocative thoughts on how American Catholic history in particular, with its triumphs, tragedies, and surprises, might prove instructive to U.S. Catholics in 1981.

Noonan, a legal scholar with a doctorate in philosophy and wide-ranging publications in Church history and theology, pressed the center to consider carefully where it would allocate its energies, and how best to do justice to the “American Catholicism” whose study it was tasked to advance. He probed the issue in terms of three “antinomies”—three sets of impasses, paradoxes, or tensions—that historians face in telling the American Catholic past.

The first antinomy, “Individual or Institution,” features prominently in a distinctly Catholic imaginary. Individual men and women often figure as the vibrant, animating pillars of an institution’s otherwise easily bland, faceless history. Yet in Catholic sensibility, solitary individuals as such achieve little simply on their own. The individual always draws on collaborators, a community, and its embodied history, as sources to ground and sustain her achievements. “Individual-in-institution is the name of a Catholic,” Noonan wrote.

Noonan named his second antinomy “Edifying or Presenting the Mottled Whole.” We might approach this in terms of the ethics pertaining to religious history insofar as it touches the memory of present believers and their communities. The historian’s work cannot be hagiography, yet Noonan suggests that somehow scholarship ought to “build up,” or at least seek out and respect the humanity of all persons of the past, whatever their mistakes and blind spots. At the same time, the historian must face head-on the sometimes grievous wrongs of religious forebearers, critiquing it all as “measured by the Gospel.” In doing so, the historian can build into the present community’s memory more disciplined, surer safeguards against self-deception and triumphalism, yet without tearing down a tradition as such and indiscriminately.

“Catholic or non-Catholic” named Noonan’s third, multifaceted antinomy. Under this heading Noonan places the provocative question of whether and how “Catholicism [can] be defined as American? Catholicism is a worldwide religion. It is, by self-definition, the opposite of the local, native, or parochial.” The intelligibility of Catholicism, Noonan says, depends on essential reference to Europe, to Palestine, and to a whole history “before Columbus.” “If you are to study Catholicism it cannot be wholly American.” The center has perhaps most directly responded to this concern in its recent commitment to carry forward the pioneering legacy of the late Peter D’Agostino, whose Rome in America was a breakthrough for bringing transnational perspectives to bear in American Catholic studies.

There are further dimensions to the “Catholic/non-Catholic” question: Should Catholic Studies look beyond the bounds of explicit religious identification and institutional life for more varied, even secularly-located realizations of Catholic values? What about the roles of ex-Catholics in American culture, whose identity and cultural contributions maintain inflections of a Catholic vision? Should our work extend out to the other Christian bodies in America? Noonan explicitly mentions only Protestants here. The center has long since answered in the affirmative on this last point: Protestant history and historians have long been integral to its Seminar in American Religion. Yet the question could be extend beyond Protestantism to non-Christian religions, as well as certain groups theologically closer to home yet nonetheless remaining at the historiographical margins (e.g., the stories of Orthodox and Eastern Catholic Christians in America). Noonan and Egan offer much more food for thought than I can reasonably summarize, but readers may access the full text of their reflections here.

After a long post, I won't spend too much time summing up. It's been rewarding, however, to dig back through the Center's history in order to make it more visible through these projects. We'd be very curious to hear how others are pursuing similar projects.
Email Post
Labels: catholicism Cushwa's posts digital humanities digital tools historiography working papers