Research Tools and the Dissertation II

Today's post comes to us from Erin Bartram. Erin completed her Ph.D. in December 2015 at the University of Connecticut. She studies 19th century American history with a focus on gender, religion, and conversion, inspired by borderlands studies. She is currently Visiting Assistant Professor of History at the University of Hartford and an editor for H-AmRel. You can follow her on Twitter @erin_bartram.

Having just defended my dissertation in December, Mike’s recent post inspired me to do a bit of a post-mortem on my own research practices, and I hope some of my successes and struggles can help others. In general, I want to emphasize three important points.


What works for you will be largely determined by the material you’re working with. My dissertation examined the lives of American women who converted to Catholicism in the mid-19th century, centering on one woman - Jane Minot Sedgwick II - and the secular and religious networks she moved in throughout her life. Everything I used was manuscript: over 2000 letters, diaries, commonplace books, etc. Moreover, what I was doing with the material meant that I couldn’t just scan for keywords in the archive; I needed all the words.


Photography might seem like the obvious solution here, and it might have been for someone else, but it ended up playing a much smaller role than I expected. It was so much easier for me to read these documents in person and transcribe them in the archive. If I couldn’t read the faded ink while sitting in the reading room, I could always change my viewing angle or adjust the light. If I found something I couldn’t read in a photo I took, weeks or months later, I was stuck with it. Dealing with cross-written, tissue-thin paper, this happened a lot. 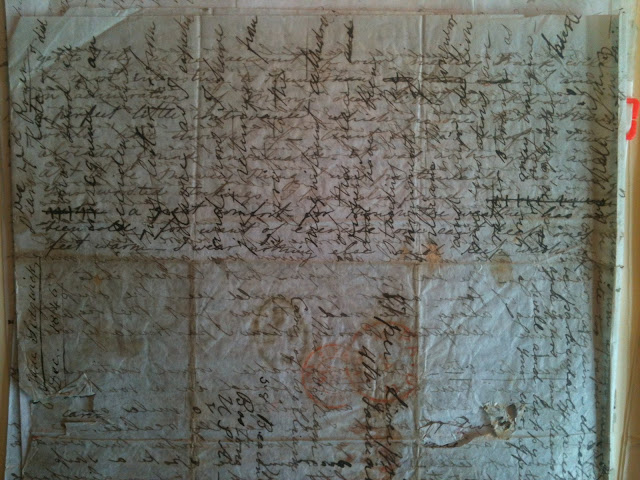 I used photography strategically, and it became a last resort in many ways. Sure, some of this is because when I started research in 2010, I had no iPhone or iPad, and I was working with a fiddly digital camera. Moreover, the archive I spent most of my time in didn’t allow the use of a tripod, so I sometimes struggled to get the really crisp photos I needed. Even so, I think it was less helpful than anticipated.

I am well aware that scholars - especially grad students - don’t always have the luxury of doing what I did. For every situation in which photos are the best/only option, though, there’s one where they don’t really make the process easier, and maybe a few where they make it harder.

I did find several digital solutions that made the process easier, but first, the things I tried that didn’t work for me:

Evernote: Tried this as a research note manager. It’s not that it didn’t work, it’s more that I found something better. See below.

Atlas.ti: Tried this to analyze my research on the suggestion of a friend of mine in the social sciences. I just never got the hang of it, and after a while, I realized that if it wasn’t working for me, it was okay to stop trying. I wasn’t raised in that tradition and the learning curve was too steep.

Scrivener: I’m another for whom this didn’t work. I have friends who really love it, so I’m sure it’s just a matter of your writing and thinking style.

Things that did work for me:

Google Drive: When I started, it was just Google Docs, and it’s where I transcribed everything I looked at in the archive. Each day labeled with the archive I was in and the date, and then a repeatable formatting pattern to help me keep track of collections, box numbers, and folder numbers. When I stumbled across something I really couldn’t decipher, I took a photograph of the problem area and put the timestamp of the photo in brackets in the transcription.

I also used it to store all of my photos, organized by trip, archive, and date. For a while, I was trying to max out all the free cloud storage options I could, using iCloud and Dropbox, but eventually it was worth it to buy some Drive space and keep everything together.

Workflowy: I used this for outlining and it was perfect. I highly recommend it. 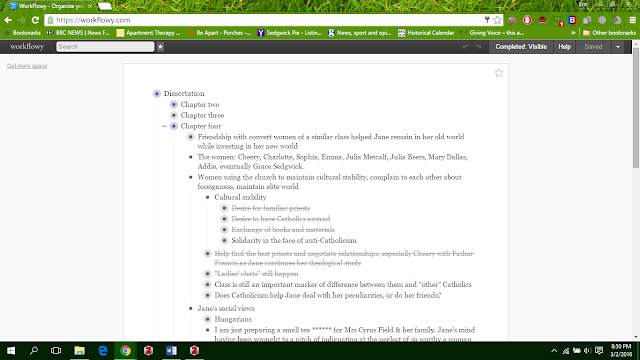 Strict Workflow for Chrome: Getting yourself started is often the hardest part. Not falling down a Wikipedia hole is a close second. This addresses both.

Written? Kitten: Because everyone needs a reward for writing. This one gives you a new picture of a kitten every hundred words, and therefore discourages real-time editing and getting hung up on phrasing. 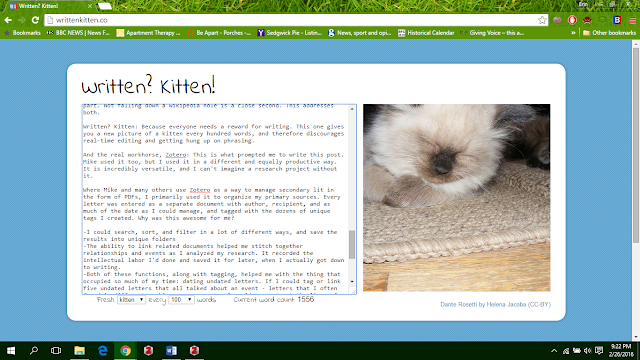 And the real workhorse, Zotero. This is what prompted me to write this post. Mike and I used the software in different and equally productive ways. It is incredibly versatile, and I can’t imagine a research project without it.

Where Mike and many others use Zotero as a way to manage secondary lit in the form of PDFs, I primarily used it to organize my primary sources. Every letter was entered as a separate document with author, recipient, and as much of the date as I could manage, and tagged with the dozens of unique tags I created. 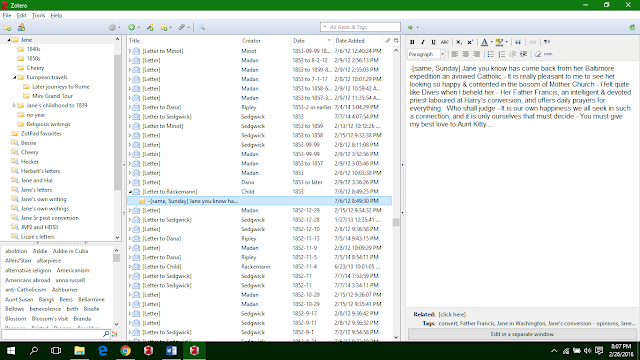 Why did this work for me? 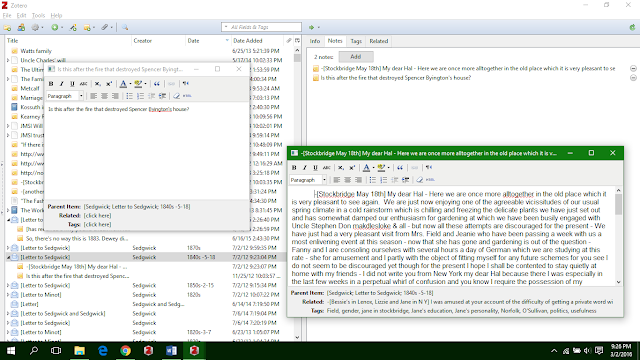 Zotero didn’t always do what I wanted it to, especially for a family with lots of II and IIIs and nicknames, but it was miles better than anything else I tried.

Caveat: The third-party Zotero apps I tried for iPad did not do what I needed them to do, for the most part, because they are designed with a different kind of Zotero user in mind, one who primarily uses it for secondary source/PDF management.

I did also use Zotero for secondary sources, but in a roundabout way; it’s where I kept and tagged all the notes I took on what I read. When I found a secondary source, especially a journal article, I created an entry in Zotero and tagged it “unread.” Since we often do a big lit search and then don’t work with that lit for a while, this helped me keep track of what I wanted to read. On days where I could only devote an hour to the project, I could always just pull up something from the “unread” tag and get something done.

My main regret in all this is that I didn’t start using Zotero early enough. In the long run, though, the benefits of switching over were much higher than the hassle of making the switch. I also regret – and have learned from – my own organizational failures, especially early in the project. At the start, I couldn’t really wrap my brain around just how much material I’d need to wrangle. Your project will grow in ways you didn’t anticipate, and picking flexible, easy-to-work-with tools like Zotero will help you go with the flow. And don’t underestimate the value of a nice pen and a good, sturdy research notebook like mine!